Seabirds are declining rapidly as an increase in ocean temperature means their food source is disappearing. 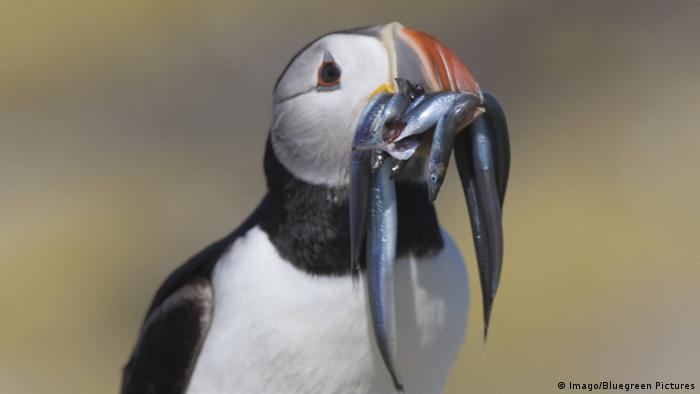 From a distance, the whir of camera shutters and bustle of photographers resembles a scene from a red carpet gala. But it's actually unfolding on a rocky protrusion at Bempton Cliffs, a protected reserve managed by the Royal Society of Birds (RSPB) on the eastern coast of northern England.

And the star of the show is an Atlantic puffin.

It's a stunning, sunny early summer's day, and day-trippers and ornithologists have flocked to the site to watch the plethora of seabirds that includes one of England's largest breeding colony of gannets. But it is the diminutive puffin, posing picturesquely with its distinctive beak and sad eyes, that captures the most attention.

Despite measuring just 25 centimeters (10 inches) tall, it is extremely agile, and can plunge through the water to depths of up to 60 meters (197 feet) at speeds of more than 80 kilometers per hour (37 miles per hour) to catch the sea eels that are often seen crammed into its mouth.

As their preferred habitats are rocky coastal cliffs of Norway, the Faroe Islands, the United Kingdom, Iceland and Greenland, it's rare to see them in the flesh, especially as they spend much of the year quite literally at sea.

And they are getting even rarer.

Although they are still plentiful — Iceland alone has millions — puffins are in trouble. In 2015, the International Union for the Conservation for Nature (IUCN) changed the designation of the bird to vulnerable to extinction. And a recent study by conservation group Birdlife said one in eight of all global bird species could be at risk.

"The puffin really is the poster bird for the catastrophic situation that is affecting UK seabirds right now," Euan Dunn, a senior policy officer with the RSPB and an author of a book on puffins, tells DW. 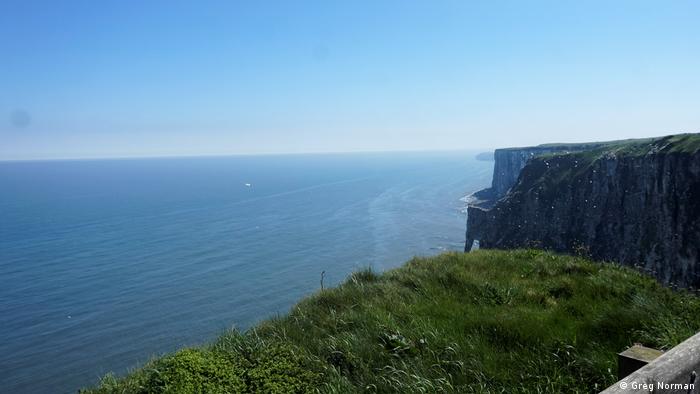 Puffins spend much of the year bobbing around in the ocean, and only come to land to breed

One colony alone is thought to have witnessed a 40 percent decrease since the last five-year census in 2013. Overall, the UK is home to an estimated 10 percent of the global population.

"It's much worse as you move north," says Dunn, adding that Scotland's Orkneys and Shetlands have it particularly bad.

"Overall, I would say Scotland's seabird population has fallen by about a half since the 1980s."

In keeping with this trend, Iceland — which is home to an estimated 40 percent of the global puffin population — has recorded a sharp drop in population numbers over recent years, with some reports estimating nearly a quarter of birds could have been lost since 2002.

In recent years, the gravity of the decline has been reflected in the traditional puffin hunters self-imposed moratorium. 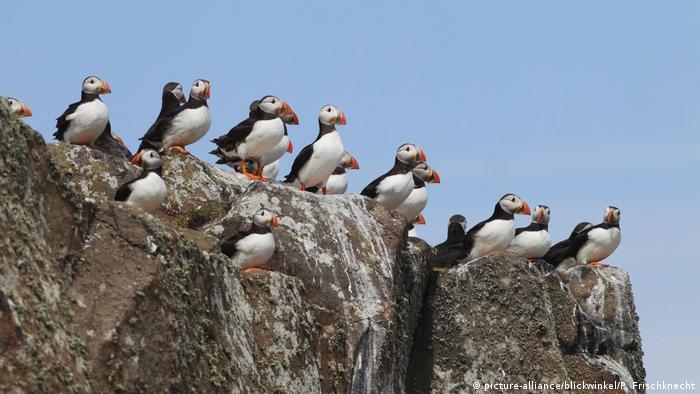 Safety in numbers? Not always

Tens of thousands of birds are still hunted annually, mainly in northern Iceland, some of which end up smoked on the plates of Reykjavik restaurant diners — but this is considerably fewer than the hundreds of thousands of immature birds that were once slaughtered each year.

Read more: Farewell to a songbird?
Read more: Two-thirds of the world’s seabirds have eaten plastic

Erpur Hansen has been monitoring puffins on Iceland's southern Westman Islands for more than a decade. The country's and indeed world's largest population is found there, but has suffered from catastrophic breeding failures since 2005.

The downward trend has largely continued. "If this keeps going on, we're facing a different world in terms of puffins," says Hansen.

Charting the exact reasons for the decline in numbers is not simple, but one is lack of food — an issue tied at least in part to climate change and warming oceans.

Puffins, like other vulnerable seabirds such as kittiwakes and the arctic skua, feed on the lesser sand eel. But as ocean temperatures rise, the colder water zooplankton that sustains the eels is either being replaced by unsuitable warmer water zooplankton, or disappearing altogether. This in turn means less food for the puffins. 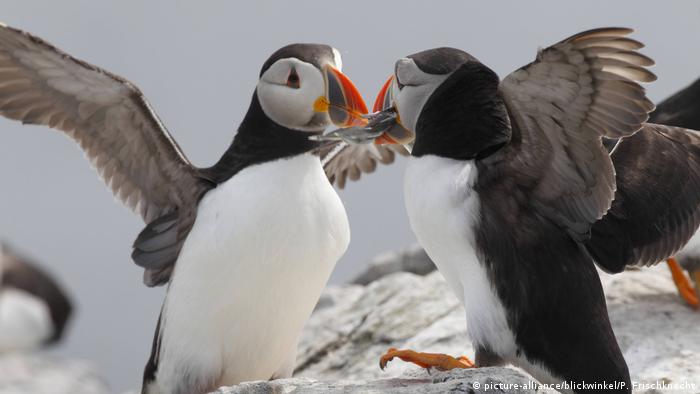 In some places, sand eels are in short supply

There are, however, hopeful signs that the disappearance of sand eels is not always definitive. Erpur Hansen says the fish unexpectedly returned to the waters around the Faxaflói Bay near Reykjavik, a key but diminished puffin habitat, two years ago.

"We have had the highest puffin productivity there … it really cannot get any better," he told DW.

Francis Daunt, a population ecologist with the Centre of Ecology and Hydrology, believes there is more to the complex issue of dwindling puffin numbers in certain areas than warming seas. He cites overfishing, competition with seals, extreme weather conditions and rats that eat eggs and chicks as further contributing factors.

He says because conservationists can't change ocean temperature levels or the incidence of extreme weather events, "People tend to focus on tangible work. For example, eradicating rats from seabird islands is a very valuable thing to do," said Daunt. 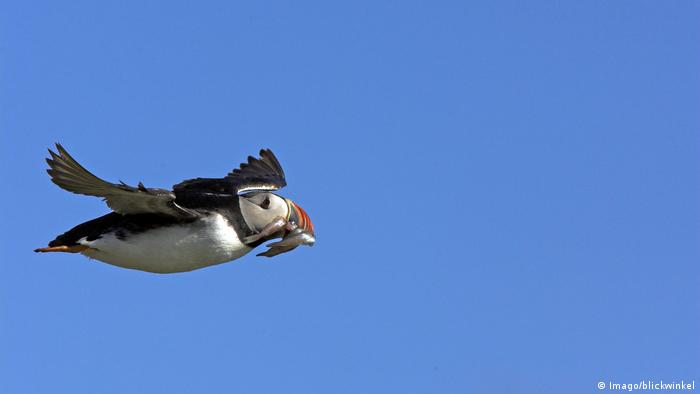 The reasons for puffin decline are many

The RSPB is engaged in just that on the Scottish Isles of Shiant and other locations, and has also launched Project Puffin which is a UK volunteer-led exercise in counting and monitoring populations and exchanging information with groups elsewhere.

Dunn says they are doing what they can "to increase the resilience of the seabirds we have, giving them the best fighting chance that we can to combat these pressures they face."

Another prong in that strategy is the creation of three protected areas for sand eels off the coast of Scotland.

"All you can do is make sure there is no human activity in those areas that will make the situation even worse for the existing sand eel populations," he says.

Flying under the radar: Seabirds hold the key to healthy fisheries

Seabirds are being severely threatened by fisheries, pollution and invasive species. Scientist and conservationalist Ross Wanless explains to DW why the birds of the sea could be pivotal for survival of the planet. (13.11.2015)

As rising temperatures threaten the survival of many plants and animals, one option could be to move them to more suitable climes. It's a divisive idea among scientists and conservationists. (13.06.2017)

The albatross: A bird built to soar

Albatrosses have the longest wings in the animal kingdom. And they are masters at using them efficiently. In fact, they spend most of their time up in the clouds, and very little with their feet on the ground (11.05.2018)

Royal Society for the Protection of Birds (RSPB)

US farming: lessons in sustainability from the Meskwaki Nation

Among the vast monocrop fields in central Iowa, the indigenous community practices regenerative agriculture. Could it provide inspiration for farmers battling climate change?