Farewell to a songbird?

The yellow-breasted bunting has gone from "vulnerable" to "critically endangered," say conservationists. Hunting is the main reason for a dramatic decline in numbers. The songbird is considered a delicacy in China. 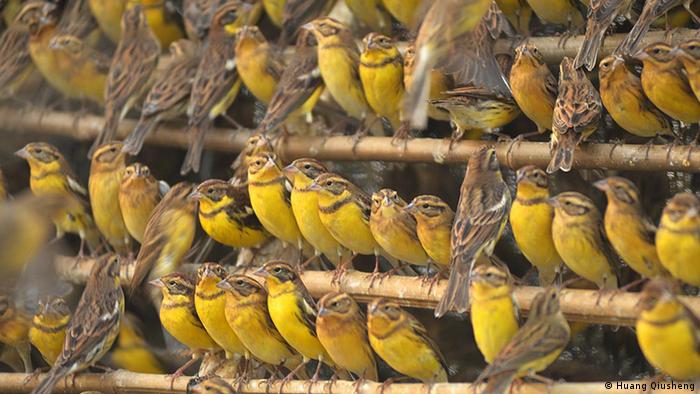 The yellow-breasted bunting is massively at risk of extinction

Until the 1980s, the small yellow-breasted bunting was a frequent and prominent sight in the skies over northern Europe and Asia. Large flocks of the sparrow-sized bird could be spotted at resting points along the way to their summer breeding quarters in Finland, northern Russia, China and Japan. Over winter, the birds headed south, mainly to India and southern China. But this exact routine has put the species on a path to extinction.

The status of the tiny songbird has been revised from "vulnerable"  to "critically endangered" on the IUCN Red List because the decline of its population is even greater than previously thought.

The rate at which the bird has declined appears to have sped up over the last three generations, covering a time span from 2006 until 2017. Numbers are believed to have plummeted around 90 percent in that time.

The declines began in the west of the breeding range, states BirdLife. They have since spread eastward. The losses are believed to be driven by traps set up for the birds along their migration routes. 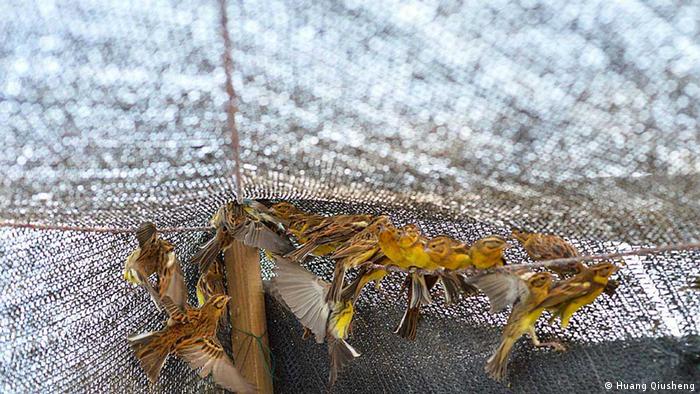 The species is a delicacy in China where it is known as the "rice bird." Johannes Kamp, a landscape ecologist at the University of Münster, and a team of his fellow researchers ran simulated population trajectories a few years ago.

According to the projections, the decline reflects an initial bunting harvest of 2 percent of the total population in 1980, with an increase of 0.2 percent annually to a harvested proportion of 8.6 percent — or 8.6 million birds — in 2013.

"Unfortunately, the birds became fashionable in the 1990s," said Kamp in an interview in 2015 when DW first reported on the topic. "The birds are eaten as a delicacy, not by the poor people, but by the more distinguished, rich people."

Although hunting has been illegal since 1997, the trade in songbirds remains big — and still pays. The birds end up on the black market and later on dinner plates. "It takes more than one animal for a meal," said Kamp.

On its website, the Hong Kong Bird Watching Society (HKBS) recently pointed to reports of yellow-breasted buntings being sold on the Taobao website, a Chinese equivalent to Ebay or Amazon. Meanwhile, Taobao has said the seller's pages have been removed. Living birds have been sold there for up to 28 euros ($34) each.

What the future holds

HKBS has declared 2018 the International Yellow-breasted Bunting Awareness Year and published a video on youtube highlighting the story and drama surrounding the songbirds:

In cooperation with BirdLife International, the Hong Kong-based organization held workshop in China in November 2016 to initiate steps to protect the buntings.
"The main recommendations from the workshop were that the yellow-breasted bunting should be officially protected in all range countries," writes HKBS on its website. Furthermore, the bird's migration patterns should be managed and its breeding, migration and wintering sites need to be "identified, surveyed, protected, and also managed."

An International Conservation Action Plan of the Yellow-breasted Bunting is also in the making and expected to be published by 2019, ahead of the next Convention on Migratory Species (CMS/COP 13) in India.

Conservationists hope to prevent the bird going the way of the once prolific passenger pigeon, which was driven to extinction through hunting and habitat loss in North America at the beginning of the 20th century.

Despite legal protection, birds are still illegally killed across migration routes – particularly in the Mediterranean. Experts are meeting this week in Manila to tackle this and other threats against migratory species. (24.10.2017)

Off the coast of New Zealand, conservationists are sequencing the genome of kakapo parrots to try and bring the bizarre flightless bird back from the brink. They're also tracking every detail of its strange sex life. (04.07.2016)

About a tall, green, bounty-hunted bird

The kea is the world's only alpine parrot. It's big enough to hunt for sheep, which is why it fell victim to a century-long bounty hunt - New Zealand's bird of the year 2017 is indeed fascinating (and endangered). (13.12.2017)

Article on the secret trade of birds

About the Yellow-breasted Bunting

Listen to the bird's sounds