Almost all German lakes and rivers face ecological crisis | Germany | News and in-depth reporting from Berlin and beyond | DW | 17.05.2018

A German conservation group has warned that chemicals and river engineering have damaged around 92 percent of the country's freshwater. Germany is among the worst EU performers when it comes to water protection measures. 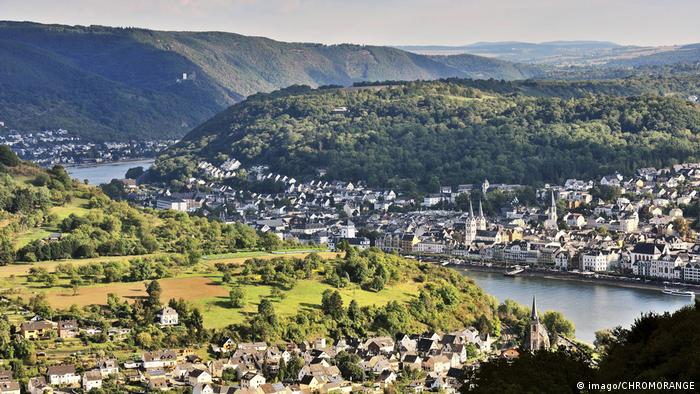 A report released this week by conservation group Friends of the Earth Germany (BUND) has found that 92 percent of all surface water in Germany has either been dirtied by agricultural chemicals, or been developed in a manner that threatens freshwater species.

While the days of dead fish washing up on the banks of the Rhine River are long gone, environmentalists have become alarmed by what they're finding beneath the surface.

"The decline of species is dramatic," said BUND chairman Hubert Weiger while presenting the group's latest findings on Wednesday. The number of insect species, amphibians and even mammals, such as otters, has fallen dramatically in recent years, he said, while river engineering, and in particular river straightening, has devastated much of the natural habitat enjoyed by several fish species, including salmon, eels and trout.

"There isn't enough passageway [for fish]," BUND water expert Laura von Vittorelli told German media. "Once you straighten a river and, say, every two kilometers [1.2 miles] there is an obstruction, then the fish often can't get over it. Fish want to come upstream to reproduce, but can't, so we find that certain fish species are completely missing."

Fixing mistakes of the past

According to BUND, much of today's problems are because of mistakes made in the past. Figures show that since 1954, Germany has invested some €45 billion ($53 billion) into developing drainage basins, building dams and straightening rivers. These investments have been made mainly to allow ever-larger container ships to travel the largest rivers, as well as to prevent major flooding incidents.

Today there are around 340 dams on German federal waterways and at least one weir or a lock every two kilometers on any flowing stream of water.

However, in light of the latest ecological findings, Weigar said, it was time for the German government to move on from its old approach to water protection. The solution, he said, is not to build more, but to remedy the damage that's already been caused.

The quickest solution, according to Weigar, would be to introduce riparian buffers around all rivers and lakes. Such a buffer consists of a vegetated area, usually forested, along the banks of the river to protect it from agricultural chemicals being used on the adjacent fields that would otherwise run into the water.

A longer-term solution would be a reduction in the use of pesticides and fertilizers, although such actions would likely face pushback from industry.

Anton Hofreiter, the Green Party's caucus leader in the Bundestag, echoed those calls by demanding a revised approach to water protection. "Manure and fertilizer must no longer end up in our waters, we must move away from unnecessary shoreline obstruction and the salt, sulfate and iron loads from mining must be quickly reduced," he said in a Facebook post.

Read more: Fishing for microplastics in the Rhine

Germany dwelling on its freshwater crisis

Germany is among the bottom-third of performers in the European Union when it comes to protecting its freshwater ecology.

BUND has accused the German government of delaying the implementation of the EU's Water Framework Directive, a policy drafted in 2000 that called on all member states to expand the scope of water protection and achieve "good status" for all waters by 2015.

That deadline has since been delayed until 2027, and there are widespread fears within the conservation community that it could yet be postponed further, amid pressure from chemical and agricultural lobbies. According to Weiger, the EU is even looking at softening the water protection standards it outlined almost 20 years ago.

Member states are slated to meet at the EU Water Conference in Vienna in September, where the European Commission will unveil its latest State of Water Report.

Just a few years ago, many German rivers were ecological wastelands. The fish had ulcers and the porpoises died out. Today, the rivers are thriving. Can lessons from the banks of the Elbe save rivers around the world? (12.08.2013)