Why is a Polish oil company building up a media empire? | Business | Economy and finance news from a German perspective | DW | 04.01.2021

Why is a Polish oil company building up a media empire?

Polish oil concern Orlen's CEO Daniel Obajtek may be a man to watch when Jaroslaw Kaczynski departs the political stage. Sigma Bis, a media house partly owned by his company, seems to lie at the heart of his strategy. 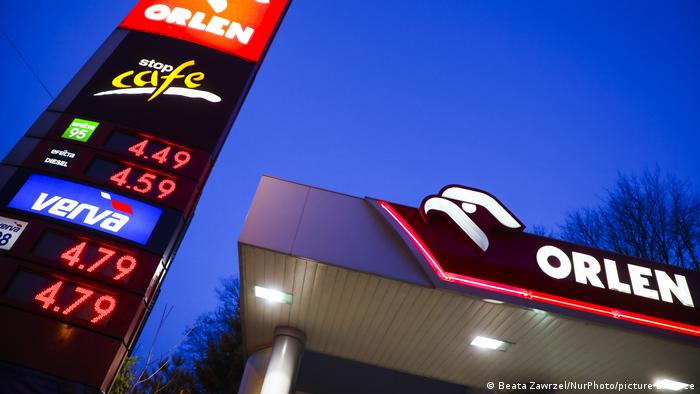 Since the Law and Justice (PiS) party won the Polish parliamentary election in 2019, there has been an intense power struggle within the party itself and between it and its two smaller United Right coalition partners. The coalition may be reaching a moment of decision.

Perhaps the best way of understanding the direction in which PiS is going is to observe the jostling for position in state-owned firms between key factions in PiS and the coalition.

Of particular importance is the fate of Zbigniew Ziobro, justice minister and nationalist leader of smaller coalition partner United Poland (SP). His star seems to be waning after a series of scuffles with Prime Minister Mateusz Morawiecki and PiS party leader Jaroslaw Kaczynski.

Ziobroists — friends and family of the justice minister — were liberally afforded plum jobs across the state-owned sector after 2015, but since the EU summit earlier in December, from which Morawiecki emerged politically enhanced, the prime minister has been removing Ziobro allies from state-owned companies.

Oil's where it's at

The CEO of Poland's largest oil firm Orlen, Daniel Obajtek, meanwhile, is emerging as a beneficiary in this jockeying for positionas his firm expands its role on the media market.

In July 2017, Kaczynski announced that after changes to the judiciary, his next goal would be to "repolonize" media ownership, a euphemism for squeezing private media critical of the government and reinforcing media supportive of PiS's national conservative project.

"PiS wants to take control over all available media and to use public money to spread their propaganda," Roman Giertych, a minister in the first PiS coalition government in 2005-07, told DW.

Since coming to power in 2015, this government has sought to strangle independent print media outlets, such as Gazeta Wyborcza, Polityka and Newsweek Polska by restricting public advertising.

Some suggest the PiS is moving in the direction of Fidesz in Hungary or the AKP in Turkey. "Corruption and state capitalism are integral to the project," Jacek Rostowski, former Polish finance minister, told DW. "Morawiecki is also a believer in state capitalism, perhaps a slightly cleaner version, but the model applies to him also. First you nationalize the banks, then set up companies through which friendly banks funnel cheap credits. Then you buy up media and push your own political views. This is systemic and intentional," Rostowski said.

Orlen: The power behind the power

At the end of 2019, the CEO set up the media house as part of its goal of diversifying away from energy and moving into the media sector. According to its 2030 strategy, Orlen plans to allocate 70 billion zlotys (€16 billion, $18 billion) to investments in new business sectors and increase its margins on nonfuel sales by 50%, reducing its vulnerability to declining demand for traditional fuels and price fluctuations. 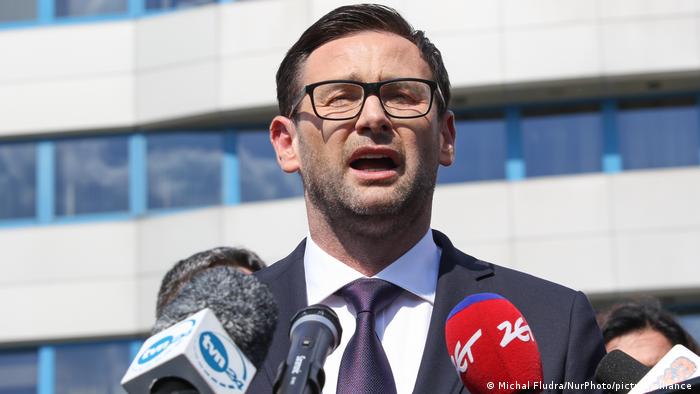 The CEO of Orlen, Daniel Obajtek, is aiming to expand his firm's role on the media market

The process intensified this winter after the company finalized the acquisition of press distributor Ruch on November 24 and on December 7 announced the purchase of publisher Polska Press, gaining in the latter acquisition access to 17.4 million users of internet portals, as well as readers of Dziennik Baltycki, Polska The Times and Dziennik Polska.

Access to Facebook Pixel software will enable the company to create databases on the website's users for targeted advertising.

"Orlen has no plans to take over other media. We are focusing on the development of assets supporting sales, which are already functioning, or, as announced, will be part of the Orlen Group, i.e. Sigma Bis, Ruch and Polska Press Group," Orlen said in a press release.

Online news site Onet.pl announced last week that Orlen is mulling taking over Gremi Media, in whose portfolio are two of the most respected dailies in Poland, Rzeczpospolita and Parkiet.

"Obajtek is a real dark horse on the Polish political scene," Robert Tomaszewski at Polityka Insight, a Warsaw-based think tank, told DW. "He is building up his power in the state-owned companies and could well be the one to replace Morawiecki if or when he goes."

Sigma Bis only started operating at the end of 2019 after gaining approval from the consumer protection office. Orlen has 66% of the company's shares, and PZU, the largest Polish insurer, has 34%. Within its first year in existence, it is already a major player in the Polish media market.

This has had contradictory effects. Jakub Bierzynski, CEO of rival media group OMD, for example, says Sigma Bis is a political creation and as such will not survive changes on the political scene. Some managers from other media agencies are reportedly wary of working at Sigma Bis, fearing that a possible change of government in three years would see the company disappear.

"I am not surprised that people do not want to associate their future with such a seasonal company," he told online news website Wirtualnemedia.pl.

However, other heads of rival media agencies believe the new boss, Marcin Dec, gives Sigma Bis some credibility on the market.

"Dec is a media person — a long time in the industry so knows the market from different perspectives very well," Malgorzata Wegierek, CEO of the Havas Media Group Poland, told DW. "There are other media people in the management Board, so it seems that they are equipped and have resources on the top. In all aspects it looks like Sigma Bis will become the media agency for all or most state-owned companies."

In November, Energa started cooperation with Sigma Bis, after it took on the media services of Orlen. In September, PZU became a client and from 2021, PZU's Link4 will join up too. It is rumored that Sigma Bis may soon take on Alior Bank and Poczta Polska as clients. The big step would be into the private sector, with rumors suggesting Polish producer FoodCare will become a client.

"The example of Sigma Bis clearly shows that there is more space for nonnetwork Polish media houses, which can successfully compete with international network corporations," Goralska said. Watch that space.

Warsaw has long talked of curbing what it sees as the overmighty role of foreign media. But as PiS's polls fall, the coalition it leads fragments. With its best friend in Washington departing, it may have to think again.

Is Saudi Aramco eyeing a step into Russia's backyard?