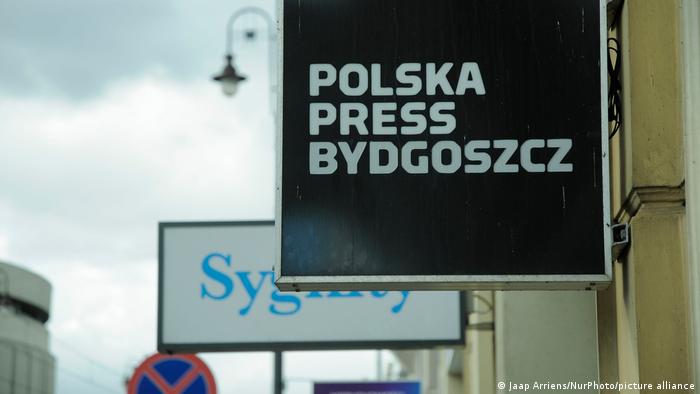 The Polish state has a 27.5% stake in PKN Orlen and the government has repeatedly emphasized its ambitions to "re-Polonize" foreign-owned media companies.

The sale of Polska Press by its current owners, Verlagsgruppe Passau, still needs to be authorized by antitrust authorities.

Members of the ruling, right-wing nationalist Law and Justice party (PiS) welcomed the takeover by the state-run company.

One lawmaker, Jan Mosinski, explained that the transfer of the media group from German to Polish ownership meant the end of regional readers being "subjected to a narrative that was often inappropriate."

"It is good that now it will be possible to provide information on Poland and explain the directions of the government's activities," he added.

PKN Orlen CEO Daniel Obajtek — appointed by the government — announced on Twitter that the transaction would give the company "access to 17.4 million users of portals belonging to the [Polska Press] group. This will allow us to effectively support sales and develop big data tools. These are key resources in the context of the planned retail network development."

Alexander Diekmann, the managing partner responsible for the company's properties in Poland said in one of the group's German newspapers: "The Passau publishing group has built up one of the largest media companies in Poland over the past two decades. For strategic reasons we have now decided to sell our Polish activities."

Press freedom in Poland under threat

PiS leader Jaroslaw Kaczynski restated the party's aim to nationalize foreign-owned press in the summer, saying: "The media in Poland should be Polish."

But opponents of Poland's ruling party blasted the media takeover and saw it as a further decline in Poland's democratic credentials.

"This is a historic moment and, unfortunately, it shows that the authorities decided to take steps similar to those that we could previously observe in Hungary under Viktor Orban," Poland's commissioner for citizens' rights, Adam Bodnar, said in an interview with the Wirtualna Polska portal.

In its 2020 report on press freedom, global media watchdog Reporters without Borders said "partisan discourse and hate speech are still the rule within [Poland's] state-owned media, which have been transformed into government propaganda mouthpieces."

The purchase of the media group by oil company Orlen, which is partially owned by the government, is a concern for dissidents and journalists.

Protesters gathered in cities across Poland on Sunday calling on the country's president to veto a new media law. The law is targeting a critical media outlet to force its owner, US-based Discovery, to sell the channel.