Can the Polish government afford to be at odds with the EU? | Europe | News and current affairs from around the continent | DW | 26.11.2020

Poland's veto of the EU's budget, supported by its ally Hungary, has again set the country against its partners in the bloc.

With access to the budget attached to member states' adherence to the rule of law, Warsaw and Budapest are thumbing their noses at Brussels' attempts to challenge their purported move towards "illiberal" democracy.

In a special edition of Conflict Zone, recorded at the Berlin Foreign Policy Forum, Polish MEP for the ruling Law and Justice Party (PiS) Ryszard Legutko said the rule of law mechanism was a "blatant" and "shameless violation" of the EU's treaties. 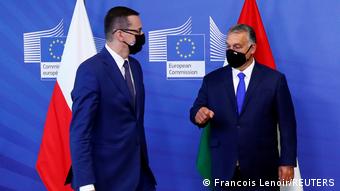 "It's not only that it's the violation of the rule of law, but it's based on lies or misinformation or disinformation," said the MEP and co-chair of the European Conservatives and Reformists Group.

Conflict Zone host Sarah Kelly challenged Legutko over what critics have called Poland's "muzzle law," which allows judges to be reprimanded or fired by a disciplinary chamber for criticizing the government's judicial reforms.

The European Commission says the law "undermines the judicial independence of Polish judges and is incompatible with the primacy of EU law."

"The disciplinary chamber does not discipline judges for the rulings," said Legutko,

"Show me the text of this piece of legislation and the number of the article or paragraph when it says explicitly that the judges will be punished or may be punished for the rulings. It's not there."

On public confidence in Poland's judiciary, Legutko contested figures that showed a significant drop and said that reforms had been spurred when support had been at an all-time low.

Questions around the judiciary, the MEP went on to say, were an "internal problem" for Poland.

Efforts in Warsaw to "repolonize" the media have also come under fire. Poland's ranking in the World Press Freedom Index has dropped from 18th to 62nd in the last five years.

Polish media "are the most diverse media" in Europe, Legutko told Sarah Kelly, saying there was "more plurality in Polish media than in France, in Germany, in Belgium."

The Law and Justice Party MEP dismissed concerns too over the government's grip on national media. 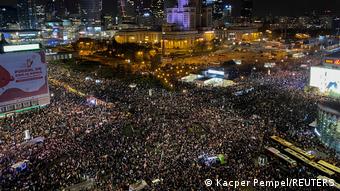 Kelly asked the Polish MEP if he was concerned his government was leading the country on a path of isolation, but Legutko's concern was for the European Union, he said.

The EU "is suffering from a serious disease, probably a deadly disease, which is called 'tyranny of the majority'" and "trying to impose some kind of new despotism."

"I'm very concerned about it."