The EU should give up "nightmares" of United States of Europe, said Hungarian nationalist leader Viktor Orban while starting his fourth term as prime minister. He won a landslide victory in a recent parliamentary vote. 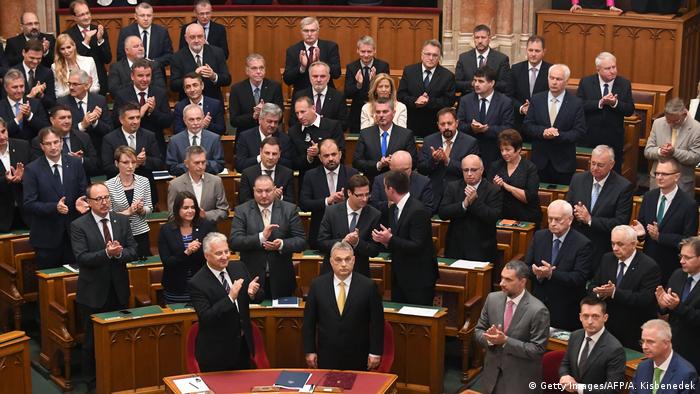 Kicking off his fourth term as prime minister on Thursday, Hungary's Viktor Orban declared the era of liberal democracy to be over.

"We have replaced a shipwrecked liberal democracy with a 21st-century Christian democracy, which guarantees people's freedom, security," Orban said during his acceptance speech before the lawmakers in Budapest.

"It supports the traditional family model of one man and one woman, keeps anti-Semitism at bay, and gives a chance for growth," he added.

The right-wing leader has been in power continuously since 2010 and had previously also served as the prime minister of Hungary between 1998 and 2002. He is known for his authoritarian style of rule and his skepticism towards the EU, especially the permissive migrant policy spearheaded by Berlin.

The right-wing nationalist coalition gathered around Orban won 133 seats in Hungary's 199-seat parliament last month. With over two-thirds of lawmakers, it gives his Fidesz party the possibility of changing the constitution unchallenged. During his speech, however, Orban pledged to "serve the three-thirds" of citizens, according to statements carried by Hungary's MTI news agency.

During his speech on Thursday, Orban admitted that "We need the EU and the EU needs us."

At the same time, he said the EU should give up "nightmares" of the United States of Europe.

Issues such as immigration have caused a divide between Hungary and the EU, due to compulsory quotas of asylum seekers that member states were required to accept.

Orban has also faced massive protests in the weeks since the election day.

Protesters have accused Orban and his right-wing nationalist Fidesz party, which won two-thirds of parliamentary seats at the polls, of taking control of state media and using them to gain an election advantage, as well as opaque campaign funding.