Why Central Asian states want peace with the Taliban | Asia| An in-depth look at news from across the continent | DW | 27.03.2018

Why Central Asian states want peace with the Taliban

Russia and Central Asian countries are becoming more involved in the Afghan conflict. An international conference in Uzbekistan suggests the rise of IS in the region is a reason for alleged ties with the Taliban. 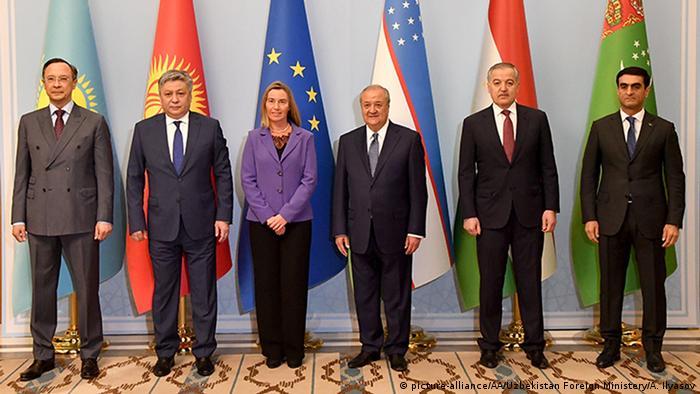 Uzbekistan hosted a two-day Afghanistan peace conference in the capital Tashkent this week. Attending were  more than 20 countries – including representatives from Central Asian countries, the United States, Germany, China, Pakistan and Russia.

Afghan President Ashraf Ghani, his Uzbek counterpart Shavkat Mirziyoyev and the European Union's top diplomat Federica Mogherini were among the high-ranking officials who participated in the meeting.

With Taliban representatives missing from the event, the scope of the conference was limited, but Uzbekistan and Afghanistan are hoping to strengthen regional consensus to end the 17-year-long violent conflict in Afghanistan.

Kabul has been seeking direct negotiations with the Taliban since 2010, but the militant group has never shown any real interest in talks with Afghan authorities. The jihadists, on the other hand, have expressed desire to talk to US officials, whom they believe hold the key to ending the protracted Afghan war.

Read more: Opinion: Peace proposal with Taliban puts the West in a fix

Michael Kugelman, a senior associate for South and Southeast Asia at the Washington-based Woodrow Wilson Center for Scholars, believes that Uzbekistan saw the Afghan peace conference as less of an opportunity to demonstrate its willingness to be a key player in launching Taliban talks and more as a chance to gain recognition from the international community as a credible, peace-loving country.

"The previous government in Uzbekistan had a bad global reputation, thanks in great part to human rights abuses, and it was not particularly well received in the West," Kugelman told DW, adding that by taking on a leadership role in the latest effort to kick start peace talks with the Taliban, Tashkent hoped to reinvent itself as a more benign player on the global stage.

For Afghanistan, the conference was about building a stronger consensus around its latest peace offer to the Taliban, recognizing the militant group as a political party.

The peace offer has been received with concern and skepticism by the former Afghan Northern Alliance, which played a key role in ousting the Taliban regime during the 2001 US invasion of Afghanistan. The Alliance members have close ties to Central Asian states.

Analysts point out that the Afghan government wanted to convey the message to former Northern Alliance commanders that negotiations with the Taliban would be beneficial for all parties.

Uzbekistan has been dealing with its own Islamist insurgency, aided by militants based in Afghanistan. The presence of the Islamic Movement of Uzbekistan (IMU) in Afghanistan remains a major concern for the Central Asian country. The IMU wants to overthrow the Uzbek government and establish an Islamic state governed by Sharia Law.

"I think Afghanistan and Uzbekistan want to address each other's concerns with regards to groups that pose a regional threat," Wahid Muzhdah, a Kabul-based security analyst, told DW.

The IMU was formed in late 1990s. It fought alongside the Taliban, who in return gave the group sanctuaries inside Afghanistan to launch attacks in Central Asia.

Since the collapse of the Taliban regime in 2001, the IMU has moved its bases along the Afghanistan-Pakistan border region and has been struggling to find allies. Its ties with the Taliban and Pakistani militant groups deteriorated after its longtime leader Tahir Yuldashev was killed between 2009 and 2010 in a US drone strike.

"The Taliban do not have any foreign agenda and are only focused on Afghanistan. This has pushed groups like the IMU towards 'Islamic State' (IS)" Muzhdah added.

The Uzbek government is now trying to reach out to the Taliban to isolate the IMU and IS, analysts say.

"Uzbekistan is aware that a major source for conflicts on its soil originates from across the border, and that Afghanistan is key to its own security," Siegfried O. Wolf, director of research at the Brussels-based South Asia Democratic Forum (SADF), told DW.

Why is 'Islamic State' targeting Shiites in Afghanistan?

But any Uzbek move to deal with the Taliban needs Moscow's backing, experts underline.

Russia has increased its involvement in Afghanistan. For many experts, this is surprising, because Moscow had maintained an apparent distance from the Afghan conflict for many years. In fact, Russia even supported the US invasion of Afghanistan in 2001 and the subsequent toppling of the Taliban regime. At the time, former Afghan President Hamid Karzai rightly said that Afghanistan was probably the only place where the interests of Moscow and Washington didn't clash.

But a new geopolitical situation is emerging in the region, and it seems that Russia has decided not to remain "neutral" in the protracted conflict wracking the Asian country.

Read more: 'China and Russia want US out of Afghanistan'

Russia first established contacts with the Taliban leadership in 2007 to discuss the issue of drug trafficking through Central Asian countries that share borders with Afghanistan. Now there are reports that Moscow is again in contact with the Taliban. But this time the Moscow-Taliban contacts are not limited to talks on drug trafficking, according to analysts. Russia, they say, realizes the US policies in Afghanistan have failed, and therefore wants to intervene.

"Russia may have been chased out of Afghanistan several decades ago, but now it appears keen to re-enter the scene in a big way," Kugelman said.

Russia fears that Afghanistan may become another safe haven for IS after Iraq and Syria. Experts say Moscow wants to make sure that doesn't happen in close proximity to Central Asia.

Analysts say the Afghan conference hosted by Uzbekistan has Russian backing as Moscow does not want to be seen as directly involved in the conflict.

General John Nicholson, the commander of US forces in Afghanistan, recently said the US has evidence suggesting that Russia is supplying arms to the Taliban.

"Taliban have assured Russia and Central Asian countries that it would not allow any group, including the IMU, to use Afghan soil against any foreign state," Muzhdah said.

Despite the mistrust between NATO and Russia, Moscow still believes that a peaceful resolution of the Afghan conflict could make it easier to isolate and target IS militants.

"This is a case where Moscow may conclude that the tactical advantages outweigh the strategic disadvantages," Kugelman said.