Despite months of protest by farmers and growing international attention, the Indian government has refused to give in to demands and repeal a set of agricultural laws. Farmers have vowed not to bow under pressure. 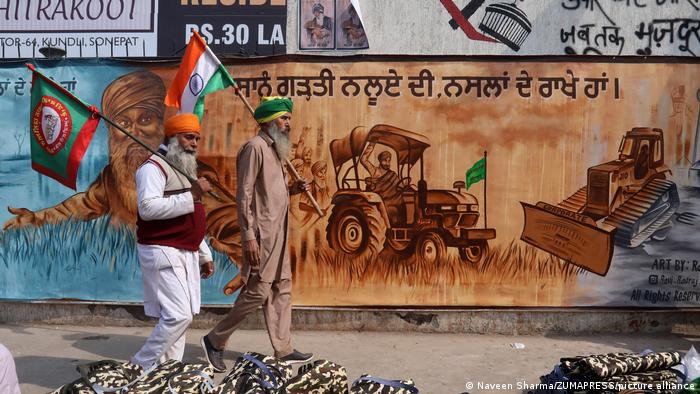 In what has become a recurring event in recent months, tens of thousands of protesting farmers in northern India blocked national highways on Saturday with parked trucks and tractors, or simply by sitting on the pavement.

Blocking roads has become a favorite tactic in a monthslong protest movement, which shows no sign of stopping. Farmers have insisted that a new set of agricultural reforms will sink their livelihoods.

"We want to send out a signal loud and clear. We will not tolerate the repressive measures unleashed by the government against farmers, including the discriminatory laws, the arrests of farmers and the internet shutdown," Darshan Pal, a protest leader, told DW.

The blockades are being organized by an umbrella body of 40 farmers unions. Rakesh Tikait, leader of the Bharatiya Kisan union, told DW that Saturday's protests would not take place in the northern states of Uttar Pradesh and Uttarakhand, as well as the capital territory, Delhi.

"They can be called to Delhi any time, so they are kept on standby," Tikait said, as protesters encountered police barricades on the main road into the Delhi neighborhood of Ghazipur, a major gathering point for protesters.

Delhi was put on high alert Saturday, with police presence increased at border crossings and several metro stations closed. There have been no reports of violence thus far.

"We are not taking any chances. We have also deployed drones to ensure there is no breach," a senior intelligence official told DW. 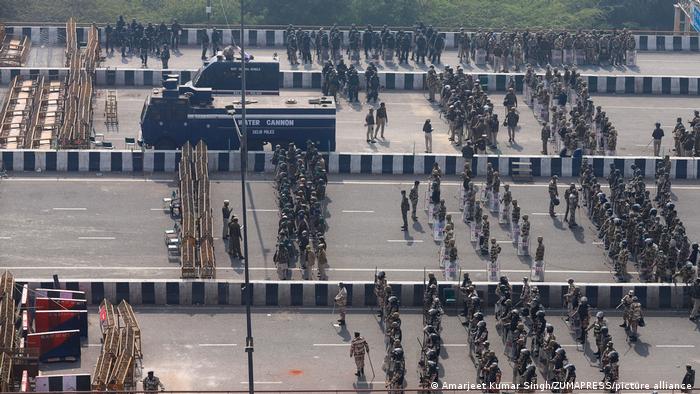 Delhi police barricaded highways leading into the capital on Saturday

"We would like to request that the people cooperate with farmers just for three hours, and let's do our protest peacefully," said Manjeet Singh Rai, president of Bharatiya Kisan farmers' union.

In the state of Haryana, northwest of Delhi, protesters blocked the national highway near the Shahjahanpur border crossing to Rajasthan state.

Similar scenes played out in Ludhiana, a city in the northern state of Punjab, and the city of Nashik in the western state of Maharashtra. 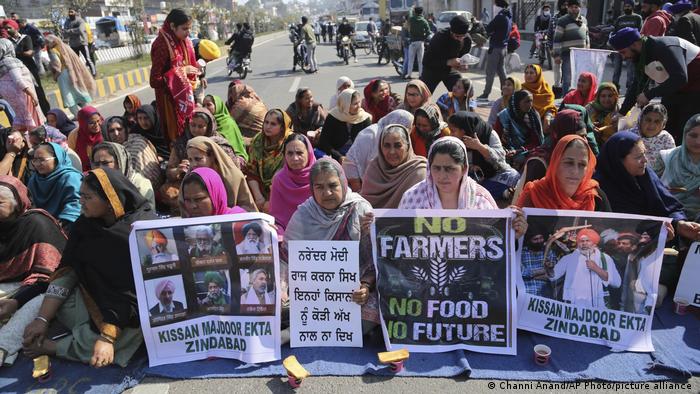 The protests, which began in northern India's farm belt in autumn 2020, are centered on three agricultural reform laws pushed through by Prime Minister Narendra Modi's government. Proponents have said the laws will reform and modernize outdated rules on the sale, storage and marketing of produce.

However, small-scale farmers have said the laws will allow big agricultural corporations to squeeze them from the market.

For over two months, thousands of farmers, mostly from Punjab, Haryana and western Uttar Pradesh, have been living in sprawling protest camps at three border points leading into Delhi — Singhu, Tikri and Ghazipur. 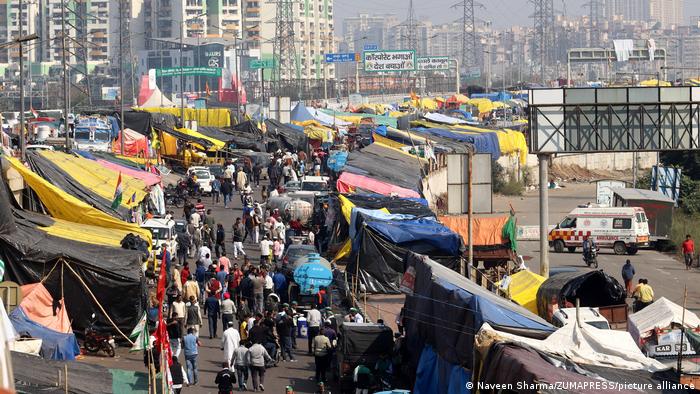 Thousands of protesters live in camps like this one in Ghaizipur, on the outskirts of New Delhi

The protest movement, comprising men and women, young and old, regularly sit on highways braving the elements and blocking roads leading into the national capital.

Farmers have said that over 140 of their ranks have died during the course of the protests from a range of causes, including suicide, road accidents and exposure to cold weather.

Despite the months of road blockades and demonstrations, Modi's government has not met the farmers' demands and repealed the laws. A decision by India's Supreme Court to delay their implementation to allow more time for the opposing sides to work on a solution was not enough to appease the farmers.

The stalemate between the farmers and the government has been one of the most significant policy challenges faced by Modi.

Agriculture is the primary source of livelihood for about 58% of India's workforce, and farmers have been arguing for years to get the minimum guaranteed prices increased. 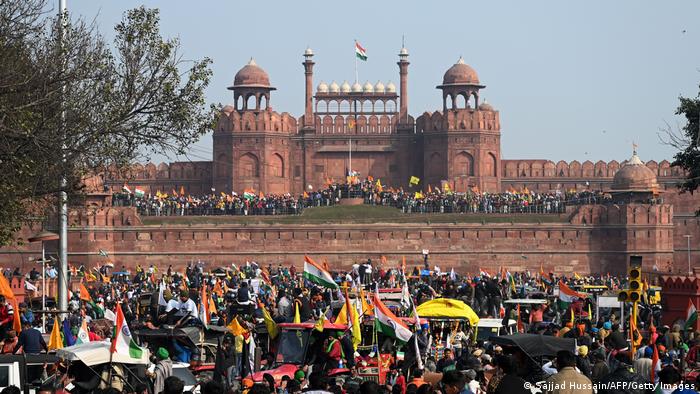 A tractor rally overshadowed a large military parade, and protests grew out of control as demonstrators clashed with police, stormed barricades and hoisted a farm union flag on the ramparts of Delhi's iconic Red Fort.

Police cracked down after last weekend's unrest by suspending internet services in the areas where demonstrations were taking place, and fortifying main roads leading into the capital with nails and barbed wire. 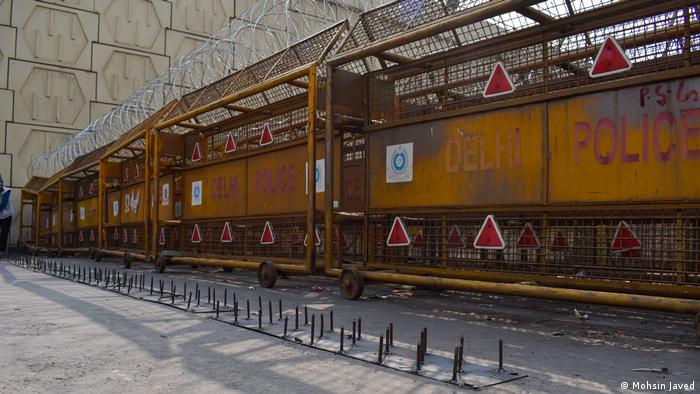 Farmers in the international spotlight

Several international personalities, including singers and activists, have come out in support of the farmers.

"Why aren't we talking about this?!" pop star Rihanna tweeted on Tuesday along with the hashtag #FarmersProtest, eliciting a flood of response from her fan base of over 100 million followers.

The social media traction did not go over well with the Indian government. Shortly after the tweets went viral, India's Foreign Ministry issued a statement calling the comments "neither accurate nor responsible," and included the hashtags #IndiaTogether and #IndiaAgainstPropaganda.

"Before rushing to comment on such matters, we would urge that the facts be ascertained, and a proper understanding of the issues at hand is undertaken," the statement said.

'Nobody can beat us down'

The farmers' unions have vowed to continue the protests until the laws are completely repealed — a demand firmly rejected by the government which has instead offered to amend the laws.

At the end of Saturday's three-hour blockade, angry yet determined farmers said they were prepared for the long haul.

"Let us see who will blink. We will dig in our heels and fight until these discriminatory laws are scrapped," Banwari Lal, a farmer from Jind in Haryana, told DW.

This message was amplified by union leader Tikait, who said farmers would give the government until October 2, Mahatma Gandhi's birthday, to fulfill their demands.

"After that we will do further planning. We will not bow under pressure. What we have shown today should be an indication that nobody can beat us down," said Tikait.

Opinion: Violent clashes should not take away legitimacy of India's farmers protests

The violent confrontation between the farmers and the police on January 26 shouldn’t have happened. But that shouldn't be used to silence protests that stand on legitimate ground, says DW's Ankita Mukhopadhyay.