Indian government to continue talks with farmers amid intensifying protests

Talks have been postponed to Thursday, as farmers rejected the government's pitch to form a committee to address concerns.The protests over controversial farm laws have entered the sixth day. 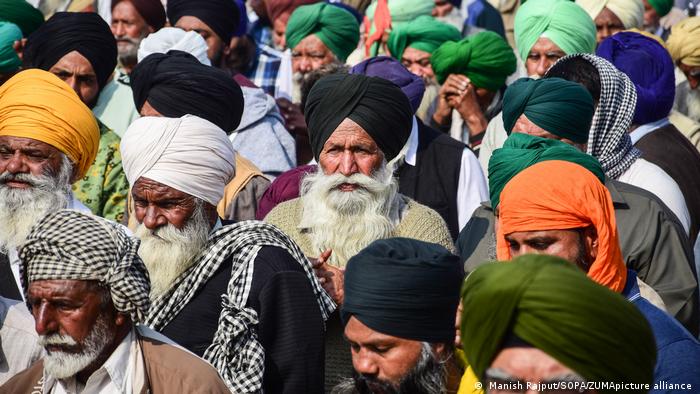 Indian Agriculture Minister Narendra Tomar had brought forward a meeting with representatives of farmers because of the coronavirus pandemic and cold weather.

However, talks broke down as farmers rejected the government's pitch for a committee to address the concerns. A second meeting has now been scheduled for Thursday, December 3.

The farmers have said they will continue their protests if demands are not accepted. Farmers from the states of Punjab and Haryana continued to make way to the capital city.

Roop Kumar, leader of farmer's organization Bhartiya Kisan Union (Ekta Ugrahan), told broadcaster NDTV, "We do not accept the government's proposal to set up a special committee. We demand that the government cancel the laws related to agrarian reform. We are not going to back down even if the government uses force."

Indian news agency ANI said the government gave a detailed presentation to the farmers on minimum pricing and other changes to the agriculture industry.

"We will also demand a law on minimum support price. If the government does not agree, the protests will continue," farmer activist Jagjit Singh Dallewal told broadcaster NDTV ahead

Some 35 farmer representatives were attending the meeting, he added.

This comes after the farmers rejected Home Minister Amit Shah's offer to advance the date of talks in exchange for them moving their protest to a designated site on the outskirts of Delhi.

The farmers' protest, the biggest the country has seen in recent years, intensified over the last five days. Thousands of farmers have marched to the national capital, with many more trickling in, threatening to block five entry points to Delhi.

"Delhi Police has strengthened its presence at various border points in the wake of farmers protest. All internal (Delhi Police) and outside (paramilitary) forces have been mobilized to the maximum," a senior police official was quoted as saying by Indian news website News 18.

Last week, hundreds of farmers clashed with police while trying to enter the capital. The police used tear gas and water cannon to try and stop protesters while the farmers used tractors to try to clear the barriers that police had constructed using concrete blocks, shipping containers, and horizontally parked trucks.

Gajjan Singh, one of the protesters from the northern state of Punjab, died on Monday night near the Delhi border after suffering a heart attack, New Delhi-based NDTV reported. Singh is the second protester to die since the farmers began their march last week. His health had deteriorated due to the cold weather.

Farmers' unions have called on the Indian government to roll back the newly enacted agricultural laws.

What are the protests about?

The ruling Bharatiya Janata Party (BJP) insists that the laws will fetch better prices and free farmers from traditional middlemen who dominate the trade. The government hopes that its new policy will double farmers' income by 2022.

Farmers' associations say the legislation does not guarantee the acquisition of farm produce at the minimum support price (MSP), thus leaving them at the mercy of corporations that are now expected to enter the country's troubled farming sector.

"We are fighting for our rights. We won't rest until we reach the capital and force the government to abolish these black laws,'' said Majhinder Singh Dhaliwal, a farmer leader.

Opposition parties and some allies of Prime Minister Narendra Modi have called the laws anti-farmer and pro-corporation and called on the government to accept the farmers' demand to roll back the laws.

Government's response to the protests

The Indian government has so far dismissed the farmers' concerns and accused opposition parties of instigating the protests.

On Monday, Modi said farmers were being misled by the opposition. "The new agricultural laws have been brought in for benefit of the farmers. Reforms are being done in the interest of farmers, which will give them more options,'' he said at a rally.

"The farmers are being misled on these historic agriculture reform laws by the same people who for decades have misled them," Modi said.

The state of India's farmers

Once accounting for a third of India's gross domestic product (GDP), the farming sector now produces only 15% of the country's $2.9 trillion (€2.4 trillion) economy.