India's Supreme Court formed a committee to resolve a standoff between the government and farmers over three agriculture laws. The farmer unions say they will only settle for a repeal of the laws. 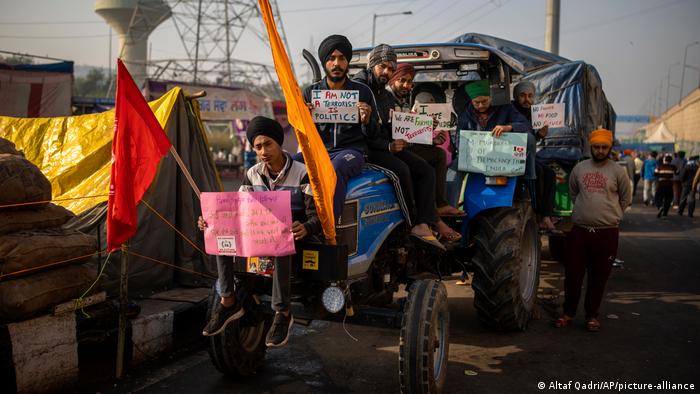 Thousands of farmers have camped near the border of New Delhi since November 26.

India's Supreme Court on Tuesday temporarily suspended the new agriculture laws that are at the heart of the massive protests by farmers outside the national capital New Delhi.

"We are going to suspend the implementation of the three farm laws until further orders," Chief Justice Sharad Bobde said in a decision that comes as a major blow to the government.

The court-ordered stay may "assuage the hurt feelings" of the protesting farmers and encourage them to come to the negotiating table with confidence and in good faith, Bobde said.

The court said it wanted to facilitate mediation between the government and the protesting farmers. The two sides have held eight rounds of talks, all of which have been inconclusive. Another one was scheduled for mid-January.

The farmers' unions have maintained that they want the laws rolled back — a demand firmly rejected by the government which has instead offered to amend the laws.

Thousands of farmers have camped near the border of New Delhi since November 26 in hopes of pressuring the government into repealing the laws.

What was the court's solution?

The Supreme Court added that it would form a four-member committee of agricultural experts that would take over negotiations and try to end the protracted dispute that emerged as a major challenge to Prime Minister Narendra Modi.

"Every person who is genuinely interested in solving the problem is expected to go before the committee," the court said. "The committee will not punish you or pass any orders. It will submit a report to us."

The committee will hold its first meeting in 10 days from Tuesday and will submit its report within two months, the court said.

What was the farmers' response?

While the farmers' unions welcomed the Supreme Court's decision to freeze the implementation of laws, they refused to participate in the consultation process of the committee which they criticized as "pro-government."

"We think the government is bringing this committee through the Supreme Court. The committee is just a way to divert attention," Balbir Singh Rajewal of the Bhartiya Kisan Union told DW.

"We don't accept this committee, all the members in this committee have been pro-government and these members have been justifying the laws," one of the farmers' unions was quoted as saying by NDTV.

"Suspending the implementation of the laws as an interim measure is welcome but is not a solution and the farmer unions have not been asking for this solution, given the fact that the implementation can be reinstated," another union was quoted as saying by the Indian Express newspaper.

"It is clear that the court is being misguided by various forces even in its constitution of a committee. These are people who are known for their support to the three laws and have actively advocated for the same," they said in a statement.

The unions also said that they would only settle for a complete rollback of the laws.

What are the farm laws about?

The government has argued that the new laws will give freedom to farmers to sell their produce outside regulated markets and enter into contracts with buyers at a pre-agreed price.

The ruling Bharatiya Janata Party (BJP) insists that the laws will fetch better prices and free farmers from traditional middlemen who dominate the trade.

The government hopes that its new policy will double farmers' income by 2022.

Farmers' associations say the legislation does not guarantee the acquisition of farm produce through state-run organizations that guarantee a minimum support price (MSP).

They fear this would leave them at the mercy of big corporations that will enter the country's troubled farming sector and squeeze them for profit, destroying their livelihood.

"The moment private companies come in, they will have a monopoly. Farmers will have little say, and large corporations will dictate terms," Sabaran Singh, a farmer from Punjab, told DW.

Opposition parties and even some allies of Prime Minister Narendra Modi have called the laws anti-farmer and pro-corporation.

AFP and Murali Krishnan from New Delhi contributed to this report.