India: Narendra Modi drops in on Sikh temple amid protests

Prime Minister Modi has made an unexpected stop at a Sikh temple in New Delhi. His visit comes as angry farmers — many of them Sikh — are protesting laws they claim give more power to big companies. 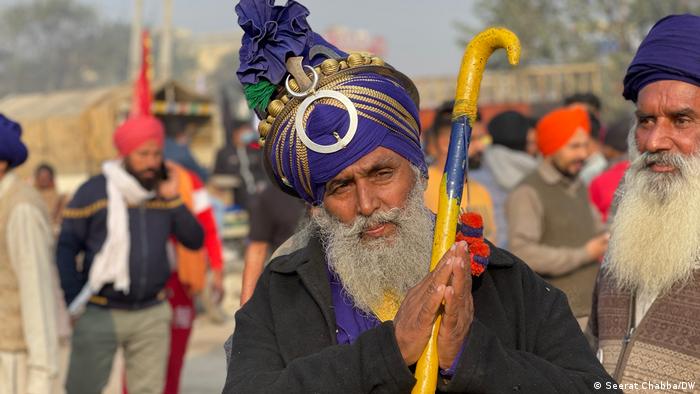 Indian Prime Minister Narendra Modi paid a surprise visit to a Sikh temple in New Delhi on Sunday and prayed at the shrine as protests against a new agricultural law continued to rock the country.

The protesters rallied against the government's attempt to liberalize the agricultural market in the country. Farmers, mostly from the Sikh-dominated Punjab and Haryana regions, have blocked roads into Delhi.

Modi, whose security detail often keeps him away from the general public, talked to Sikh leaders and posed for photographs with other visitors to the shrine, Reuters reported.

The protests and strikes carried out by the angry farmers represents one of the biggest challenges that Modi's populist government has faced during its six years in power.

On Wednesday, a 68-year-old Sikh priest shot himself during a protest on the outskirts of Delhi — his suicide note explained that he was sacrificing his life to "express anger and pain against government injustice," The Associated Press reported.

India's economy, already under strain from the coronavirus lockdown, is expected to suffer even greater setbacks due to the series of protests and strikes which have crippled parts of the country.

Farmers have slammed the new law which they say allows big companies to buy up land and undercut smaller farmers.

Farming makes up 15% of India's GDP and farmers, with their well-organized unions, represent a powerful constituency. Half of India's 1.3 billion-strong population are involved in the agricultural sector.

So far attempts by the two sides to find an agreement have fallen flat.