Farmers in India have taken to the streets again as part of ongoing protests against new laws that they say will upend their ability to make a living. 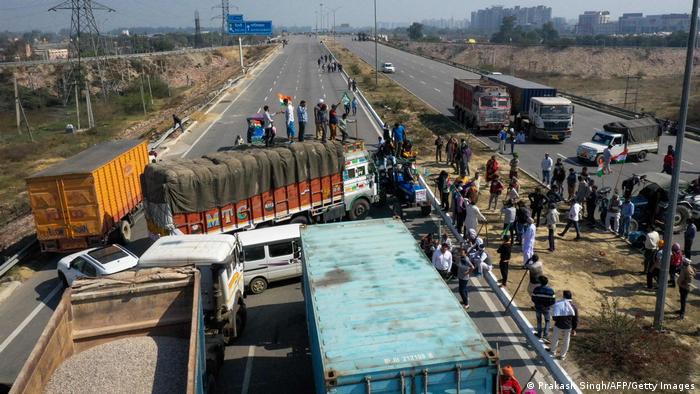 Farmers have been protesting the agricultural laws for months, saying they would be left vulnerable to large corporate land grabs

Tens of thousands of protesting farmers across India began a three-hour blockade of national highways in a continued effort to force the government's hand to repeal controversial agriculture laws.

Authorities placed the capital New Delhi on high alert and deployed additional police at the city's borders, as well as closing 10 metro stations.

Police had set up barricades ahead of the protests on certain key roads, as shown by a Delhi Police video shared on Twitter.

Farmers have been camping out in large numbers just outside the capital since mid-November.

Protesters marched through the city on January 26, India's Republic Day, which saw some scenes of violence as groups of farmers clashed with riot police and broke through barricades.

The Times of India newspaper reported that 50 people had been detained in Delhi for taking part in a protest in solidarity with the farmers.

Farmers unions had called for the nationwide blockades, under the name "Chakka Jam" to protest against the internet ban in areas where farmers had camped out.

"We will block vehicles for three hours in a symbolic gesture," said Rakesh Tikait, a farmers' leader. "We will give stranded people water, food, and explain to them why we are protesting."

'We want to show Modi our strength'

Over half of India's population is dependent on agriculture for a living — although the sector's economic importance has declined over the past few decades. Farmers say that the new market liberalization laws will benefit large corporations and make it difficult for them to survive.

Indian farmers are already suffering from high levels of inequality and debt. The stand being taken by the protesters is proving to be one of the greatest challenges faced by the Modi government since he took office.

Repeated attempts at negotiations have fallen flat as farmers relentlessly keep up the pressure. The protests also drew international attention after celebrities such as pop star Rihanna and environmental activist Greta Thunberg showed their support.

Pro-government supporters lambasted the involvement of the celebrities by burning photos of them.