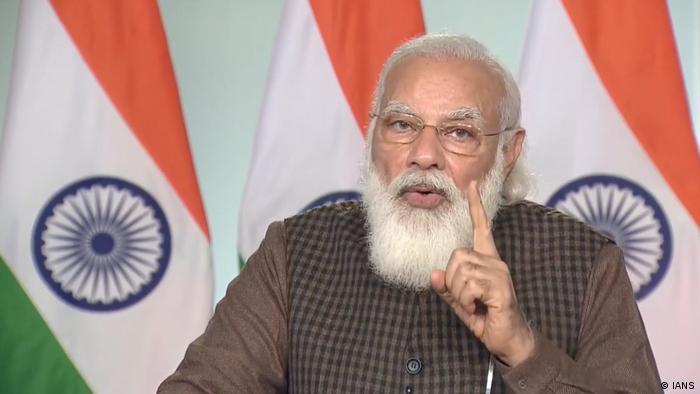 Tens of thousands of farmers have camped on the outskirts of the capital Delhi for more than two months, demanding a repeal of new agricultural laws that they say benefit private corporations.

"The country was saddened by the insult to the Tricolor (Indian flag) on the 26th of January in Delhi," Modi said in his first public comments on a monthslong farmers' agitation.

"The government is committed to modernizing agriculture and is also taking many steps in that direction," he added.

Violence erupted on Tuesday during a tractor parade in the capital to coincide with India's Republic Day. Thousands of farmers stormed the city's Red Fort, and clashes between protesters and the authorities left one dead and hundreds injured. Since then there have been sporadic skirmishes between protesters, police and anti-farmer groups.

Farmers' unions say they were not responsible for Tuesday's violence, which was caused by a minority of protesters.

What are the protests about?

The ruling Hindu nationalist Bharatiya Janata Party (BJP) insists that the laws will fetch better prices and free farmers from traditional middlemen who dominate the trade. The government hopes that its new policy will double farmers' income by 2022.

Farmers' associations say the legislation does not guarantee the acquisition of farm produce at the minimum support price (MSP), thus leaving them at the mercy of corporations that are now expected to enter the country's troubled farming sector.

Opposition parties and some allies of Prime Minister Modi have called the laws anti-farmer and pro-corporation and called on the government to accept the farmers' demand to roll them back.

Earlier this month, India's top court put the farm laws on hold and formed a committee to resolve a standoff between the government and farmers over three farm laws.

Modi told opposition party leaders on Saturday that an offer to freeze the laws for 18 months still stands.

A statement from the Samyukta Kisan Morcha (United Farmers' Front), a coalition of farmers' unions, said the government's "lies and violence is condemnable."

On Friday, an anti-farmer group of around 200 people hurled stones at protesters and damaged their tents. The group demanded that farmers vacate the area and said they had "insulted" the national flag during their tractor parade on Republic Day.

Farmer leader Rakesh Tikait said the government was "in delusion if it feels our movement will be weakened" by suspending the internet.

"The more they try to crush the voice of the farmers, the greater this movement will become," Tikait tweeted.

Indian farmers held a daylong hunger strike on Saturday to protest against the agriculture reforms.

The tens of thousands of farmers are ending their long-running protest action after the government backed down. They had been pushing for the repeal of controversial agricultural reforms.