Why a supermarket on wheels is all the rage in rural Germany | Business | Economy and finance news from a German perspective | DW | 11.02.2022

Two former day care center employees in the German state of Brandenburg have said goodbye to their old jobs and founded a startup that now sees them bringing groceries to remote communities with no stores left. 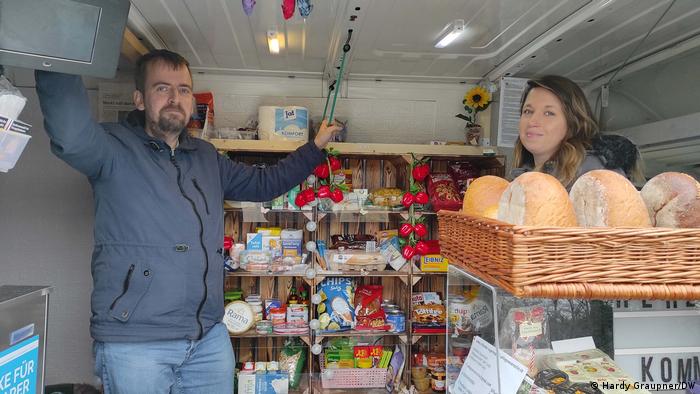 It's midday in Neuhausen, a sleepy rural community in the eastern German state of Brandenburg. It's one of those communities where any search for stores would be an exercise in futility.

The nearest town, Cottbus, is some 12 kilometers (7.5 miles) away. Getting there to do your shopping may not be a big deal for people with a car. But it's different if you have to rely on public transport and don't want to use it so as not to get infected amid the ongoing coronavirus pandemic.

For a couple of months now, Neuhausen has been one of about 50 remote communities around Cottbus where a rolling supermarket — housed in a 20-year-old retrofitted Peugeot Boxer — has been the solution to many problems for an increasing number of mostly older residents who live in the area. 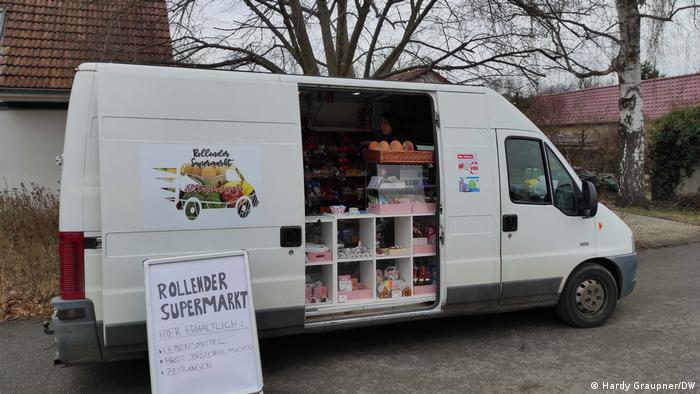 On the road again

There's a fixed schedule for the tour of the supermarket on wheels, which is fittingly called Everyday Wishes. The white Peugeot has already arrived in Neuhausen for a 20-minute stop, and it doesn't take long for the first customer to fill her shopping bag.

"I bought quite a lot today, it's not just for me but for my neighbors, too," says Hildegard Bläske, who's in her 90s but still cycling. "The rolling supermarket is a splendid idea, and I've been using it ever since I learned about it through a flyer in my mailbox."

Bläske says it's a shame that the needs of older people no longer count as much in small rural communities as she believes they counted before the country reunited in 1990.

"Just to think of the many quaint little stores we had in our neighborhood in former East Germany, including of course a grocery store," she says. "You could get everything right here, without going anywhere. But take a look around now — there's nothing left, and it's really good the rolling supermarket comes to the rescue."

The two entrepreneurs behind it are Ulrich Geis and Cindy Lindemann, both in their early 30s — and both former day care center employees. It's been quite a change of career for them involving a lot of risks.

"As the pandemic lingered on, our jobs weren't really that safe and satisfying anymore, with most kids having to stay at home at times," reflects Geis. "That also had an impact on us and helped us to embark on something completely different — now WE are calling the shots. If the rolling supermarket becomes a success story, it'll be our success; if we fail, only we can be blamed — I like it that way." 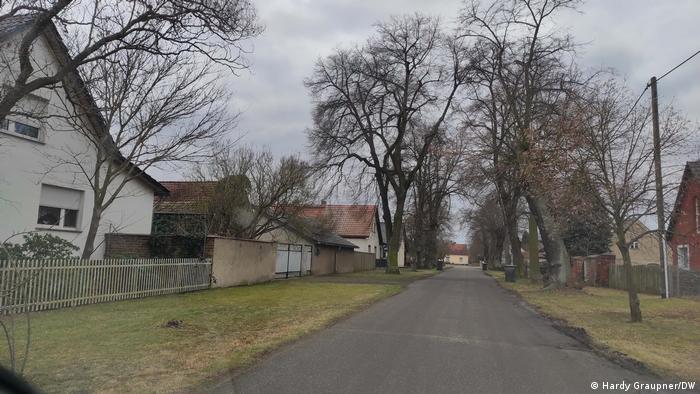 As we talk, customers are able to inspect the wide range of staples on offer. You can get anything from bread, butter, flour, cheese, vegetables and cheese to beverages, drugstore items and a lot more.

Lindemann says she hasn't regretted the career change ever since the rolling supermarket first went on tour last October.

"If the trend continues, or perhaps even gets a bit stronger, we'll have nothing to complain about," she insists. "Our bestselling items are clearly bread and rolls, butter, curd and milk. But our customers also buy preordered gifts, decorations and newspapers — and they make use of our cooperation with a regional post office."

Geis says the demand for their service has been there for a long time but admits that the pandemic has played no small role in getting their business idea off the ground.

"Who among the older folks wants to take a bus ride to the nearest town during the pandemic — a bus that would take them there only twice a day," he asks. "And who wants to enter a discount shop full of people always fearing to get infected?" While the rolling supermarket is well-stocked, there's something else on offer that's of equal importance — and it even comes without a price tag. The older folks, especially, appreciate the opportunity to have a chat with the two vendors and exchange some local news.

"It's been part of our concept right from the start," Geis points out. "We're not like others who make but a brief stop, sell their stuff and race on. We stay longer in each community on our tour so we have enough time to also chat with people. We believe that's very important."

And Hildegard Bläske from Neuhausen surely enjoyed her talk with the friendly entrepreneurs. But now the Peugeot Boxer has to move on to yet another small community in the area.

Giving its taillights a long wistful glance, Bläske says she wishes more locals would buy their basic stuff from the rolling supermarket, also the younger folks.

"They usually hop into their cars and drive to the nearest bakery or grocery store just to get some bread and other food items, they could just as well get it here," she says. "That would be better for the environment as they wouldn't have to move their cars at all."

Food on wheels in France