Delivery giant DHL is doing a roaring trade during the coronavirus pandemic. It's hiring extra staff, and appealed for special permission to deliver on Sundays — when a lockdown of sorts always applies in Germany. 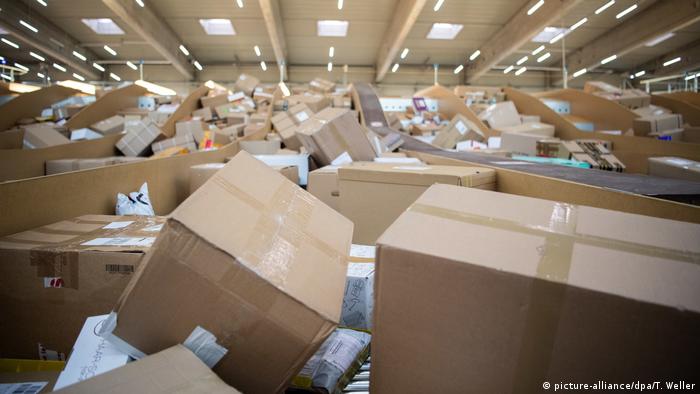 Germany's Ministry of Labor on Wednesday rejected Deutsche Post's (DHL) request to deliver post on Sundays despite a surge in orders amid the coronavirus lockdown.

The ministry maintained that even during the coronavirus crisis, the supply and delivery of DHL's parcels was not under serious threat, meaning that delivery staff would not be required to meet "further demands" and work on Sundays.

"As the Berlin Administrative Court has already ruled in several proceedings, there is no supply crisis that would make it urgently necessary to supply the population by delivering packages on Sundays," said a spokesperson for Labor Minister Hubertus Heil in Berlin on Wednesday.

Germans' right to rest on Sundays

The spokesperson attributed the recent increase in the volume of postal packages to the Easter holidays, adding that contact restrictions and the closure of numerous shops during the coronavirus outbreak was not a reason to intervene in the originally religious custom of resting on Sundays, something that's also anchored in German law.

"It is also politically incomprehensible why the parcel delivery drivers, who were significantly burdened in the crisis, should be exposed to further impositions," the spokesperson added.

Read more:  5 German habits that are tough to understand

Germany is one of comparatively few remaining countries in the world to shut down almost all non-essential industry and commerce every Sunday. Almost all stores are closed — apart from services like restaurants, cafes and pubs or the absolute essentials like petrol stations and corner stores — while public transport also runs less frequently.

Germany's constitution protects Sunday and public holidays, describing them as "days of rest from work and of spiritual improvement," having borrowed the custom from Christian religions.

Eight million packages and small parcels are currently being delivered every day, well above the annual daily average of 5.2 million. Because of the extra demand, as high streets shut down and Germans use online shopping services more and more, the Bonn-based postal company employed more staff and lobbied to have the right to deliver packages on Sundays during the pandemic.

"It would be helpful if we could get another day to deal with the current flood of parcels," DHL Chief Operating Officer Thomas Schneider told the local newspaper Westdeutsche Allgemeine Zeitung earlier this week.

The company emphasized that it was not aiming to secure regular, nationwide deliveries on Sundays, but that due to the current landscape, it hoped it could use Sundays "selectively" after having also coordinated with local work councils, Der Spiegel reported.

However, the German United Services Trade Union (ver.di) had also criticized Deutsche Post's request to authorize Sunday deliveries, with another major union saying it was "extremely skeptical" of the proposal.

Will the coronavirus crisis drive digitization in Germany?

The pandemic has boosted networking in Germany. Despite some technical hurdles, working from home is on the rise here to an extent thought impossible a couple of months ago. Will Germany become a digital high-flyer? (22.04.2020)

Germany starts relaxing some of the coronavirus restrictions. Meanwhile the Health Minister speculates that social distancing measures and hygiene rules may "last for months." (20.04.2020)