Germany starts relaxing some of the coronavirus restrictions. Meanwhile the Health Minister speculates that social distancing measures and hygiene rules may "last for months." 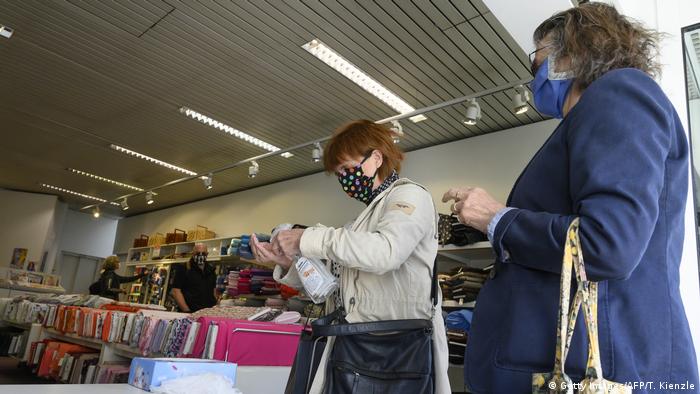 Non-essential stores in some states across Germany are re-opening on Monday, as the country eases restrictions brought in to combat the spread of coronavirus.

Stores with a shop floor of up to 800 square meters (8,610 square feet) may re-open, as well as car dealers, book and bicycle shops regardless of size. The stores will all have to ensure physical distancing and strict hygiene measures are in place.

From mid-March only "essential" shops, such as supermarkets and drugstores, were forced to shut as part of strict measures brought in to fight the coronavirus. But Chancellor Angela Merkel last week announced a change in restrictions for smaller retailers.

Read more: Germany easing lockdown as schools are set to reopen on May 4

Just like supermarkets, small shops will remind customers to keep the government recommended distance of 1.5 meters (4.9 feet), private security guards may be at some store entrances, monitoring the number of customer numbers, according to public broadcaster ARD. Wearing a face mask is "strongly advised" but still not mandatory while shopping in most of Germany's states.

Will it be business as usual on the high street?

The German Retailers Association (HDE) says it doesn't expect droves of people to flock to the shops as some stores reopen.

"We're not expecting a huge rush," HDE chief Stefan Genth told public broadcaster ZDF, adding that his organization wanted to avoid a situation in which "city centers are full."

Not all German states and cities are allowing shops to re-open on Monday – in the capital city Berlin, as well as Brandenburg, store owners will have to wait until Wednesday. Shops in the state of Thuringia will have to wait until Friday until restrictions there are lifted. The southern German state of Bavaria, meanwhile, has decided on a staggered re-opening of stores—here, DIY stores and garden centers are opening first.

There are also different interpretation of the 800-square-meter requirement: Lower Saxony, Hamburg, Rhineland Palatinate, Schleswig Holstein and Saarland are allowing larger stores to open, as long as they cordon-off the shop floor to meet the size requirement.

In Schleswig Holstein, Brandenburg and Lower Saxony there are also special regulations for shops contained within large shopping centers.

Hair salons will be next in line to resume business on May 4. However, bars, restaurants, day care centers, theaters, and cinemas will stay closed until further notice.

There will be a staggered opening of schools in different states from May 4th.

Religious gatherings and large events are canceled for the foreseeable future.