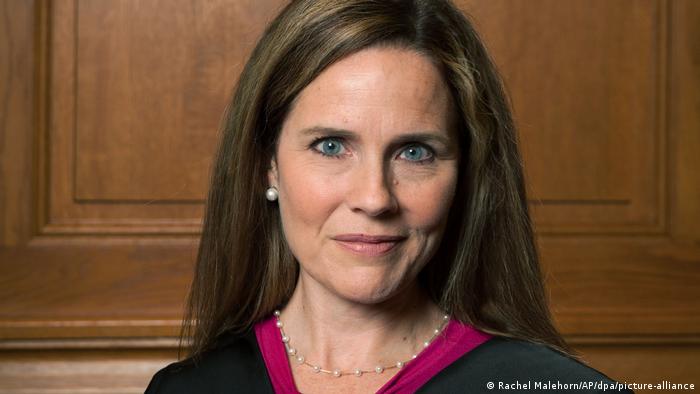 An anti-abortionist, deeply religious figure could soon profoundly influence the administration of justice in the United States. On Saturday, Amy Coney Barrett was nominated by President Donald Trump to succeed the recently deceased Judge Ruth Bader Ginsburg at the Supreme Court.

Whereas Ginsburg was hailed — and hated — as a feminist icon, Barrett, a Catholic, represents not only America's conservative forces but also its most devout. Her nomination could well inflame the country's ongoing culture war. Barrett is considered a vehement opponent of abortion, and has also voted against same-sex marriage and the health care scheme known colloquially as Obamacare. Instead, she has championed the right to own firearms and promoted conservative family concepts.

Working toward the 'kingdom of God'

Democrats in particular are worried that Barrett could allow her religious convictions to influence the work of a Supreme Court judge. During her time as law professor at the Catholic Notre Dame Law School, she once said in a 2006 commencement speech that a legal career was only a "means to an end" — and that that end was "building the kingdom of God." This sentence still provokes criticism to this day.

Barrett also triggered a heated debate in 2017 when she was nominated as judge for the 7th US Circuit Court of Appeals. At her confirmation hearing in the Senate, the Democrat Senator Dianne Feinstein told her: "When you read your speeches, the conclusion one draws is that the dogma lives loudly within you. And that's of concern." Barrett responded by saying: "I would stress that my personal church affiliation or my religious belief would not bear in the discharge of my duties as a judge." 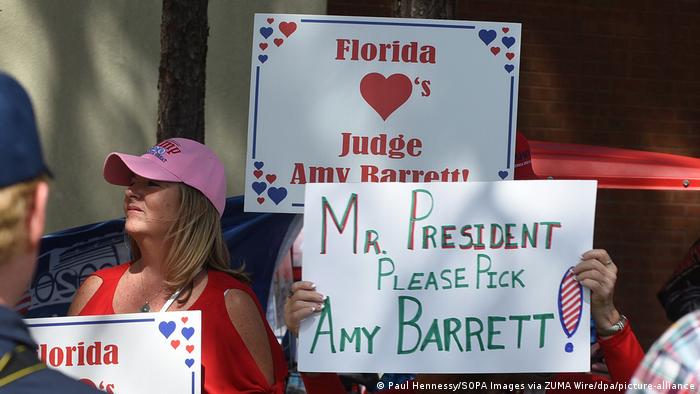 In another instance, Barrett said that she as a judge would decide "cases according to rule of law, beginning to end."

The reference to "dogma" soon took on cult status among Barrett's supporters, with the phrase "The dogma lives loudly within you" even printed on mugs and T-shirts.

It's still unclear what Barrett's attitude to abortion would mean if she were appointed to the Supreme Court. Women's rights activists are extremely concerned that she could help overturn the landmark Roe v. Wade ruling of 1973. In this verdict, the Supreme Court judges decided that the US Constitution protects the individual right to an abortion.

In 2016, Barrett, speaking at Jacksonville University, voiced the expectation that the legality of abortions would basically remain, but surmised that some of the restrictions would change.

"I think the question of whether people can get very late-term abortions, you know, how many restrictions can be put on clinics, I think that would change," she said.

She has already publicly criticized Obamacare, officially called the Affordable Care Act, which has expanded health care coverage. This has caused Democratic presidential candidate Joe Biden to worry that the health care scheme could be abolished with her vote.

Juggling a career and 7 children

Barrett's beliefs would appear to govern her life, at least in part. She lives with her family in South Bend, a small university town in the Midwest state of Indiana. She's the mother of seven children, two of whom were adopted from Haiti. She has one son with Down syndrome, whom she is said to carry piggyback down the stairs in her house every day.

In her private life, Barrett is reputed to be exceedingly friendly. Despite her crammed schedule, she finds the time to volunteer at her children's school. Her colleagues describe Barrett as a generous and hospitable, and church staff members rave about her way with people. "Not everyone with her level of education responds that way to people and she definitely did," said a director of youth ministry in South Bend, as quoted by the British daily The Guardian.

Media reports have said Barrett is a member of the People of Praise, part of the charismatic renewal movement within the Catholic Church, which upholds traditional gender roles. As a woman with a high-flying career, Barrett doesn't really seem to fit the mold in this regard.

Barrett was born in 1972 in New Orleans, Louisiana — the Old South — as the oldest of seven children. She initially graduated with a Bachelor of Arts in English literature, and then went on to study law at the highly regarded University of Notre Dame, where she also taught until 2017. She previously served as a clerk for the late conservative Supreme Court Judge Antonin Scalia, who died in 2016. He is said to have passed on to Barrett his legal views, according to which the US Constitution must be interpreted exactly as its authors understood it at the time it was written.

US begins 3 days of tributes to Ginsburg

President Trump has been enthusiastic in his description of Barrett, calling her "world class, brilliant, great." When a place on the Supreme Court became vacant in 2018, she was already on his list of potential candidates. By nominating her now, he is likely to have secured the approval of the ultraconservative wing of his party. The Republicans also hope that the fact she is a woman will convince liberal senators to back her as Ginsburg's successor.

Read more: Does Trump have time to install a Supreme Court judge?

And Barrett might also be of help to Trump after the presidential election on November 3. He has already said that the election may be contested before the Supreme Court if it doesn't come up with the result he wants. A conservative majority on the bench — and judges who are well-disposed toward him — could provide the support he needs to win another term.

In any case, if she is confirmed, Amy Coney Barrett could bolster the conservative viewpoint of the Supreme Court for decades to come, with judges appointed for life.

This article has been adapted from German by Timothy Jones

Hours after the death of Ruth Bader Ginsburg, the mudslinging over her successor began. It's shameful how disrespectful the Republicans are when it comes to the fight for power, writes DW's Ines Pohl.