Who are Germany's extreme-right group the 'Third Path'?

Members of the neo-Nazi party the Third Path were stopped over the weekend attempting to turn themselves into an anti-migrant border patrol. Who is the small but very active extremist group? 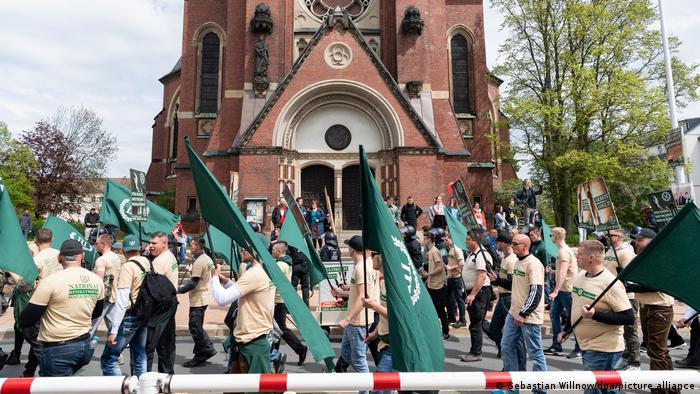 The German neo-Nazi party the Third Path, which numbers just a few hundred members, attracted international attention this weekend when it rallied people to the German-Polish border in the state of Brandenburg in an attempt to stop migrants from entering the country.

Police seized a number of weapons from the more than 50 people who were stopped — including pepper spray, batons, a machete and a bayonet — before ordering the self-styled "border guards" to clear the area.

The action was in line with the group's increasingly provocative activism. The Third Path was founded in the southwestern German city of Heidelberg in September 2013 as a splinter of the far-right National Democratic Party (NPD). The party's founder and leader is Klaus Armstroff, a former NPD official who fell out with the party over its ideological direction.

Armstroff is reported to have recruited members from a neo-Nazi group known as Freies Netz Süd (Free Network South), which was active in Bavaria before being banned in 2014. He is also considered well-connected, with ties to neo-Nazi groups outside the political system. 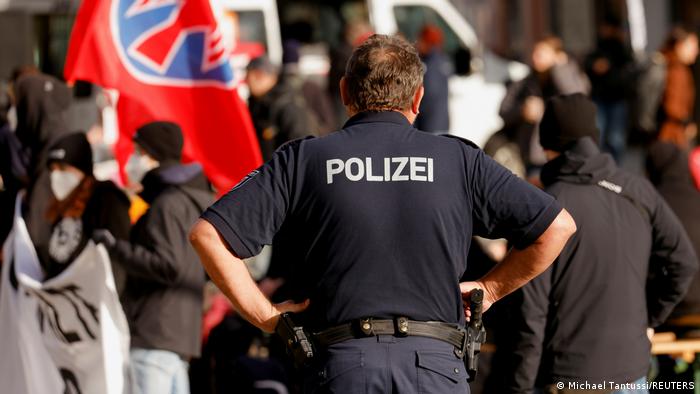 Counter-demonstration: Antifa protesters held a vigil against the ultra-right Third Path vigilantes in Guben this weekend

In its latest report, Germany's domestic intelligence agency, the Federal Office for the Protection of the Constitution (BfV), said the party has only 600 members across Germany, but that this is deliberate: the Third Path considers itself a small hardcore unit that has less interest in expanding membership than engaging in political activism.

The Third Path derives its name from the so-called "Third Way" in German politics. As the party's first point on its 10-point program puts it: "The aim of the party Der Dritte Weg is the creation of a German socialism far away from exploitative capitalism as well as egalitarian communism."

The party is considered affiliated with the "left-wing" branch of historical Nazi ideology and is in favor of nationalizing all of Germany's key industries, as well as public services and social welfare, banks and major companies.

But its brand of socialism is decidedly racist in tone, and ideologically close to Adolf Hitler's original Nazi party. Its program includes "the rigorous funding of families with many children to prevent an imminent extinction of the German people," and "the preservation and development of the biological substance of the German people."

Moreover, the Third Path openly questions the legitimacy of Germany's postwar borders, demanding "the peaceful restoration of Greater Germany with its original frontiers."

In its latest report, the BfV noted an increasing professionalization in the Third Path over the last few years. In 2019, the party realigned its structures to suit German electoral rules, helping to make it eligible to run in both national and regional elections.

The BfV said the party has around 20 bases across Germany and is most active in seven of Germany's 16 states, including Brandenburg — where the vigilante activities were stopped — Bavaria and North Rhine-Westphalia.

Provocation appears to have become a new strategy. During Germany's recent 2021 federal election campaign, the Third Path was prosecuted for putting up posters featuring the slogan "Hang the Greens" in Munich and Saxony. Despite an initial legal victory for the Third Path, German courts eventually ordered the posters to be taken down.

The struggle for the community involves a number of charitable efforts, including help for the homeless (though only those considered German) and organizing local sports activities, especially martial arts.

The Third Path also took part in demonstrations against the German government's coronavirus lockdown measures and spread theories downplaying the pandemic. In one article posted on its website in 2020, the party said the pandemic was being exploited by the International Monetary Fund and the European Central Bank to accelerate the abolition of cash, and claimed that ECB head Christine Lagarde had Jewish roots. The BfV describes the Third Path as antisemitic and racist.

The party has also shown a potentially violent street-level presence before. The BfV noted that in 2020 the Third Path assembled "national patrols" in German towns, supposedly to protect German people from foreign criminals, on the grounds that "the German people have been declared free game."