Germany has launched a second attempt to get the far-right NPD banned in court, a decade after a previous effort failed. There is no consensus on what the chances are of this attempt being successful. 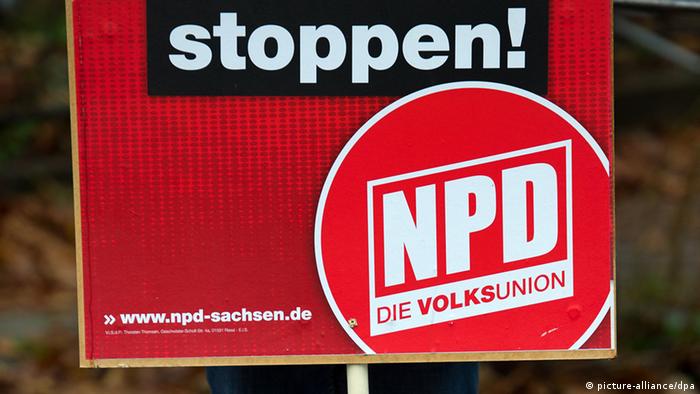 The bid to get the National Democratic Party (NPD) banned was officially launched on Tuesday, when a courier delivered a document outlining the argument for outlawing the party to Germany's Constitutional Court in Karlsruhe.

This latest attempt at getting the NPD banned is being launched by Germany's 16 states and is supported by Chancellor Angela Merkel's government, although it has chosen not to launch its own case at the Constitutional Court.

Speaking to reporters in Berlin on Monday, Merkel's spokesman, Steffen Seibert, described the NPD as "an anti-democratic, xenophobic, anti-Semitic, anti-constitutional party which we all must decisively fight politically".

The 268-page document to be submitted to the court claims that the NPD follows the same "racial biological" ideology spread by the Nazis in the 1930s and 40s. It also claims the party is seeking to undermine the democratic principles of the current German state.

There is however, no consensus about the chances of success for this attempt to ban the NPD.

Just hours before the legal challenge was submitted, the interior minister of Germany's most populous state, North Rhine-Westphalia, Ralf Jäger, expressed optimism that this attempt would be successful. Speaking on German public radio, Jäger said this case had been more carefully prepared than the unsuccessful one in 2003.

It failed because informants working for German police and intelligence had infiltrated the NPD all the way up to its leadership. They received payments from the state for delivering privileged information on the right-wing group's activities, and had influence on the party's leadership. In light of such facts, the court said a ban could not be imposed.

This time, though, Jäger said they were quite sure that the document contained no such problematic evidence.

However, a former president of the Constitutional Court, Hans-Jürgen Papier, expressed scepticism about the chances of success.

“Banning a political party must be the absolute exception,” Papier said in an interview with a regional public broadcaster on Tuesday. He also pointed to the high hurdles, which would need to be cleared, saying that showing that the party espoused and spread anti-democratic ideas was not enough to justify a ban. He said the states would have to demonstrate an aggressive, actively combative attitude towards the basic values and core of Germany's constitutional order.

The latest effort to get the NPD banned gained momentum after allegations emerged two years ago that members of the far-right National Socialist Underground killed nine immigrant small businessmen and a police woman between 2000 and 2007.