'Hang the Greens' posters must be removed, German court rules

Overruling an earlier decision, judges ordered a small far-right party to remove its controversial posters that appeared to target the Green Party. 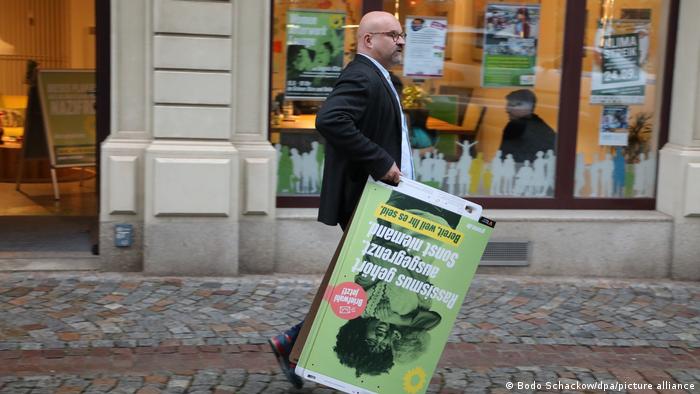 A German court on Tuesday ordered the removal of election posters reading "Hang the Greens" that were put up by a small far-right party.

Earlier this month, Der Dritte Weg (The Third Way), a party monitored by security services and suspected of links to neo-Nazi groups, had hung the posters across the eastern city of Zwickau in the run-up to the German election.

The Green Party is currently ranking third in the polls after the Social Democratic Party and the Christian Democratic Union, and are likely to be part of a coalition government after the vote.

Authorities in Zwickau had initially ordered the removal of the controversial posters.

The party then appealed the decision to an administrative court in Chemnitz, which said it was unclear whether the conditions to limit freedom of expression were fulfilled and ruled that the posters could stay.

The Chemnitz court, however, specified that the posters must be kept at a minimum 100-meter (328-foot) distance from the Green party's posters.

On Tuesday, Saxony state's highest administrative court overruled that decision after an appeal by Zwickau's city council. Judges found that the slogan amounts to incitement and the posters constituted a danger to public safety.

"The party's freedom of expression must take a back seat to the protection of public safety," the higher court said in a statement, adding that the posters could be seen as inciting hatred and violence against members of the Greens.

The posters had also appeared in other cities across Germany, including Munich.

On Friday, a Munich court issued a temporary injunction prohibiting the party from using the slogan in public.

The court said the phrase "to hang" could imply killing or physically harming someone.

The Third Way, which also has green as its party color, argues that the posters were calling for its supporters to hang posters of the party

Bavaria's Interior Ministry announced last week that police had been instructed to take down similar posters due to an initial suspicion of public incitement to commit a criminal offense.

Protest against far-right politics in Berlin

Michael Kellner, federal political director of the Greens, thanked the city of Zwickau for taking action against the posters.

Kellner had earlier commented on the Munich court decision, saying, "those who post death threats make a mockery of our democracy."

"Such an election campaign style poisons the political culture, leads to brutalization and discourages citizens from getting involved politically."