The multiple apologies issued by the White House on Tuesday did little to quiet the public outrage that exploded after White House spokesman Sean Spicer's gaffe.

His outrage-sparking comments came earlier the same day during a White House press conference as he addressed the use of sarin gas against Syrian civilians, which the Trump administration has attributed to Syrian President Bashar al-Assad.

Read more: US missile attack on Syrian airbase after suspected chemical weapons use

The press spokesman said that Adolf Hitler, unlike Assad, did not use chemical weapons against his "own people," a comment that seemingly disregarded the Nazi leader's use of poison gas to exterminate around 6 million Jews, as well as political opponents, mentally disabled people, Roma, homosexuals, and other individuals deemed undesirable by the Nazi regime. 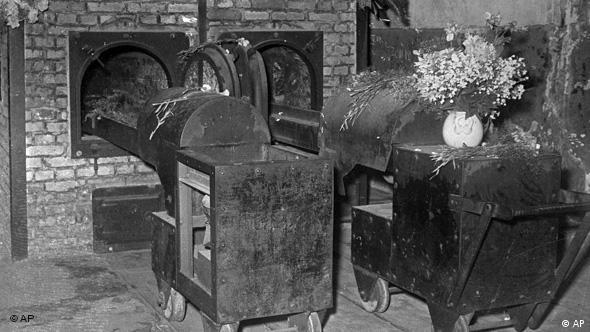 At Auschwitz-Birkenau, the Nazis engaged in mass systematic extermination of Jews by gassing them in chambers and burning their corpses in crematoria such as these

When asked shortly thereafter by a reporter to clarify his comments, Spicer fumbled his way through a defense of his comparison, stating that "when you come to sarin gas, he [Hitler] was not using the gas on his own people the same way that Assad is doing."

As another reporter shouted that Jews had been targeted, a visibly uncomfortable Spicer said in response: "There was clearly ... I understand your point, thank you. There was not ... He brought them into the Holocaust centers, I understand that," he said, in a vague allusion to extermination and concentration camps.

Politicians and civil society leaders immediately focused on Spicer's remarks and demanded an apology from the spokesman, whose comments fell on the first day of Passover, a major Jewish holiday celebrating the Jews' liberation from slavery in ancient Egypt.

Steve Goldstein, Executive Director of the Anne Frank Center for Mutual Respect in New York, issued a statement, writing that "on Passover no less," Spicer had "engaged in Holocaust denial, the most offensive form of fake news imaginable, by denying Hitler gassed millions of Jews to death. Spicer's statement is the most evil slur upon a group of people we have ever heard from a White House press secretary."

Spicer and the White House issued multiple apologies in the aftermath of the press conference.

"In no way was I trying to lessen the horrendous nature of the Holocaust. I was trying to draw a distinction of the tactic of using airplanes to drop chemical weapons on population centers. Any attack on innocent people is reprehensible and inexcusable," Spicer wrote in a statement sent by the White House to reporters.

He also apologized for his "insensitive and inappropriate" statement in a CNN live interview.

Spicer continued to apologize on Wednesday during an event at a museum in Washington.

"I made a mistake. There's no other way to say it. I got into a topic that I shouldn't have and I screwed up," said Spicer.

Over the course of Tuesday afternoon and evening, individuals wrote on Twitter under the hashtag #icantbelievehereallysaidthat to lambast Spicer for his erroneous historical claims, with Maryland's Democratic Senator Ben Cardin among them.

And despite Spicer's multiple apologies, some critics called for his ouster.

"Sean Spicer must be fired, and the President must immediately disavow his spokesman's statements," said leading congressional Democrat Nancy Pelosi.

Spicer has made a series of missteps during his first months in the job. He previously drew criticism for stating Donald Trump's inaugural audience was the biggest in history.

The young Trump administration has previously grappled with accusations of anti-Semitism and insensitivity to the Holocaust, notably when a White House statement released on Holocaust Remembrance Day failed to mention the extermination of 6 million Jews by the Nazi regime.

"Since he apologized and retracted his remarks, as far as (I) am concerned, the matter is over," said Katz in a statement on Wednesday.

But Germany was not so quick to accept Spicer's apologies. Steffen Siebert, spokesman for German chancellor Angela Merkel, said Wednesday that comparing crimes committed by the Nazis during World War II and modern-day conflicts would "lead to nothing good."

Read more: Growing anti-Semitism in the US

Far-right presidential candidate Marine Le Pen has denied French responsibility for a major Nazi-era roundup of Jews. The statement has invited comparisons to her father's notorious 'detail of history' comment. (10.04.2017)