Turkey confirms use of sarin in Syria chemical attack

Tests on victims of a suspected chemical attack in Syria's northwestern Idlib province have confirmed the use of deadly sarin gas. Syria's president, Bashar al-Assad, has denied accusations that Damascus was responsible. 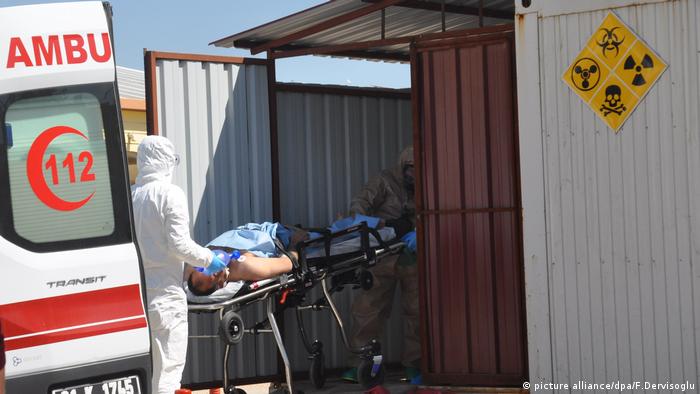 Ankara confirmed on Tuesday that the deadly nerve agent sarin was used in last week's suspected chemical attack in the  Idlib province in northwestern Syria.

Isopropyl methylphosphonic acid was found in tests on victims' bodies, which is what results after sarin is exposed to the environment. The incident killed 87 civilians, including 31 children in the rebel-held town of Khan Sheikhun.

"It has been identified that sarin gas was used," Turkish Health Minister Recep Akdag was quoted by state-run news agency Anadolu as saying.

Sarin can be inhaled or absorbed through the skin and kills by crippling the respiratory center of the central nervous system and paralyzing the muscles around the lungs.

Images from the Khan Sheikhun showed victims suffering convulsions, breathing problems and foaming at the mouth.

Both the US and Turkey blame the Syrian government of President Bashar al-Assad for the poison gas attack, but Damascus has denied responsibility.

Four days later, Washington launched Tomahawk missiles at Syria's Shayrat air base near Homs, which the US believes Assad's jets launched the  chemical attack from.

Russia - the main military supporter of Syria's regime - on Tuesday said it was demanding the United Nations conduct an investigation into the chemical attack.

President Vladimir Putin described the incident as a rebel provocation, claiming that Moscow had intelligence that such acts had been planned in other parts of Syria, including the capital Damascus, according to comments carried by Russian state media.

US Secretary of State Rex Tillerson, who traveled to Moscow on Tuesday, has accused Moscow of failing on its responsibility to stop the alleged use of chemical weapons by the Damascus regime.

Deeming it "unclear" whether Russia had been "incompetent" or complicit in the deadly attack, Tillerson said: "This distinction doesn't much matter to the dead. We can't let this happen again."