Growing anti-Semitism in the US

Jewish institutions in the US have been threatened and Jewish cemeteries vandalized. There has been a surge in racist incidents since Donald Trump was elected US president. Miodrag Soric reports from Washington. 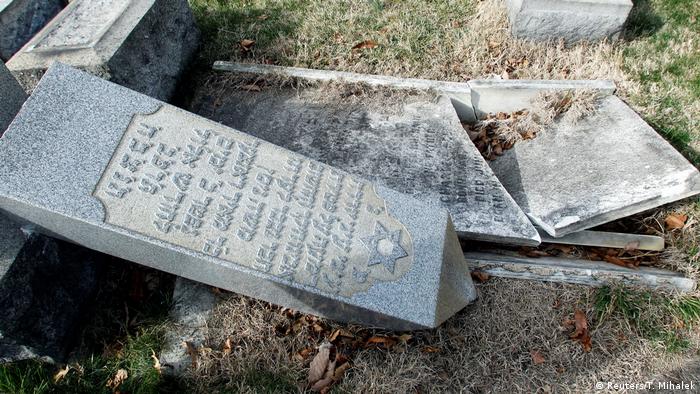 Jewish groups and schools in 11 US states have reported bomb threats, a day after more than 100 gravestones at a Jewish cemetery were vandalized. The World Jewish Congress called the incident 'despicable and cowardly.' (27.02.2017)

Recent bomb threats targeting the Jewish community in the US are "horrible" and "painful," according to US President Donald Trump. The president also urged resistance to all forms of "bigotry, intolerance and hatred." (21.02.2017)

"The question is not whether Donald Trump is an anti-Semite; the question is to what extent his behavior encourages anti-Semitism in the USA," Alan Elsner told Deutsche Welle at the annual "J-Street" meeting in Washington. Elsner works for "J-Street", an organization that represents pro-Israel, pro-peace Americans. Donald Trump himself rejects all attempts to label him an anti-Semite, pointing out the fact that his daughter Ivanka converted to Judaism before she married her husband Jared Kushner. Kushner is an Orthodox Jew who works as one of the president's senior advisors in Washington.

Trump waited far too long before he spoke out against the rising number of anti-Semitic incidents, said Elsner, who would like a "much stronger, much firmer" response from the president. This view is also shared by Jack Rosen, the president of the New York based American Jewish Congress (AJ Congress). He also believes that the president should not have taken as long as he did to express a clear opinion on the incidents.

On the evening of February 26, around 75 – 100 gravestones in Philadelphia's Mount Carmel cemetery were knocked over or broken. The police are investigating the incident but still have no clues about the suspect. Two weeks ago, the Jewish cemetery in Saint Louis was also vandalized but the police have no suspects so far.

Rabbi Deborah Waxman is lamenting the act of desecration at the cemetery in her hometown of Philadelphia. She said, "We have all been deeply shocked at this attack on our community." Graves belonging to her family members are probably amongst those that have been damaged.

In the past two months, US authorities have recorded over 90 bomb threats over the phone against Jewish institutions. Increased anti-Semitic graffiti can be found in America's inner cities. Even at universities, right-wing groups are creating an anti-Semitic mood against their fellow students who are Jewish.

Alan Elsner believes there is a link between the new-found confidence of right-wing movements and Donald Trump's presidency. He argues that, "anti-Semitic groups have been gaining a new impetus through President Trump's political program." Many feel validated by the president's chief strategist, Steve Bannon, former CEO of the right-wing internet portal, "Breitbart."

The American Anti-Defamation League (ADL), a non-governmental organization that fights anti-Semitism and promotes democratic ideals, has been calling for stronger action to be taken against the rise in fanaticism in the US. The organization has posted a reward of 10,000 dollars for information leading to the arrest of the cemetery vandals in Philadelphia.

The ADL feels that the incident is not merely an attack on Jews, but on minorities living in all US states. Experts like Jack Rosen and Alan Rosner have described a tense situation across the country. They say that not only Jews are affected but other minorities as well, such Muslims or Latin American immigrants.