Where is Europe's air safe to breathe?

Air pollution kills hundreds of thousands of Europeans every year. But breathing is riskier in some places than others. In countries like Poland, change is happening — but only slowly. 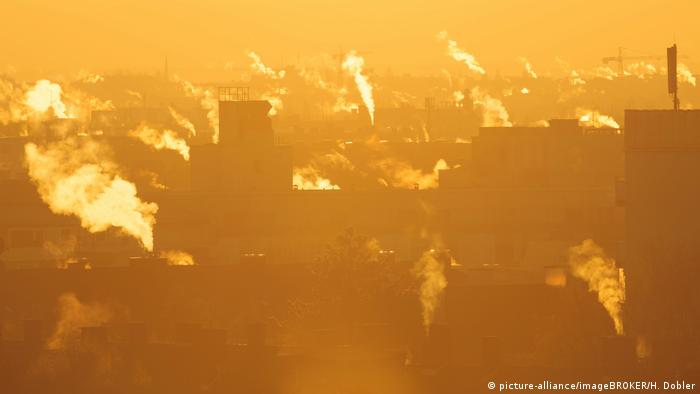 "Smog is very real. You can feel it, you can smell it," Andrzej Gula told DW. "People in Krakow joke that you can even bite it."

It's a bitter joke, because air pollution literally kills thousands of people in Poland every year.

Gula has been battling air pollution in Poland's second-largest city for the past six years. He sees only two options: You either move away or take action. He went for the latter, joining the civil society group Polish Smog Alert.

Wearing masks and checking smog levels are already a part of many Poles' regular routine. On some days, children and elderly are advised to stay home due to unsafe pollution levels.

As winter approaches, the danger increases. In Poland, domestic heating is a major culprit in creating unbreathable air.

During the colder months, people's clothes stink of smog, Gula says. A comparison with tobacco is apt — in terms of carcinogens, simply breathing in Krakow is equivalent to smoking about at least 3,000 cigarettes per year, activists estimate, and can lead to strokes, heart disease and lung cancer.

Poles are not alone in this suffering — billions of people around the world breathe toxic air every day. The World Health Organization (WHO) estimates that 7 million people died in 2016 due to dirty air, and that air pollution endangers the health of nine out of 10 people around the world, including children.

In Europe, about half a million people died prematurely in 2015 due to air pollution, the European Environment Agency (EEA) found. But some parts of the continent have it worse than others.

Where in Europe is breathing dangerous?

In 1990, exposure to fine particulate matter (PM2.5) — that is, microscopic particles with a diameter of up to 2.5 micrometers, which lodge in the lungs and cause respiratory and circulatory health problems — caused the premature death of around 1 million people in Europe. 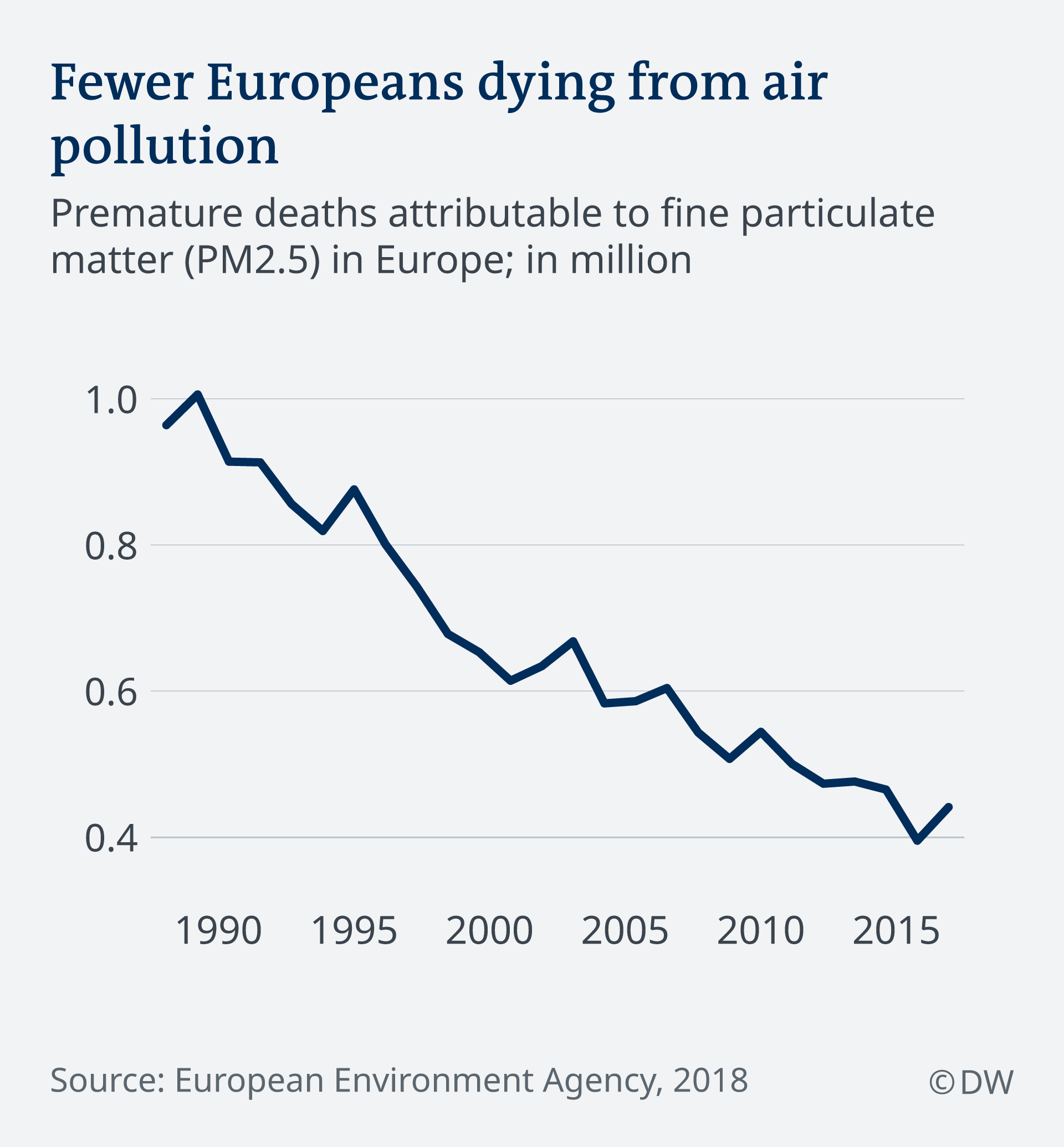 Across Europe, the number of deaths due to air pollution has steadily declined over past decades. Yet air pollution levels, especially in cities, are still dangerously — and illegally — high. Around 90 percent of urban Europeans breathe air that is hazardous to their health.

When ammonia reaches the atmosphere, it becomes particularly dangerous as it meets vehicular emissions, and produces new particulate matter.

Around 94 percent of ammonia emissions in the European Union come from agriculture. Agriculture is the only sector where emissions have not seen major reductions since 1990.

"It is very important to finally act in agriculture to fight air pollution," González told DW.

Fine particulate matter remains the most lethal air pollutant, and levels are particularly high in central and eastern Europe. Although older industrial facilities play a role, household heating with low-quality fuels like coal and wood is by far the biggest cause. 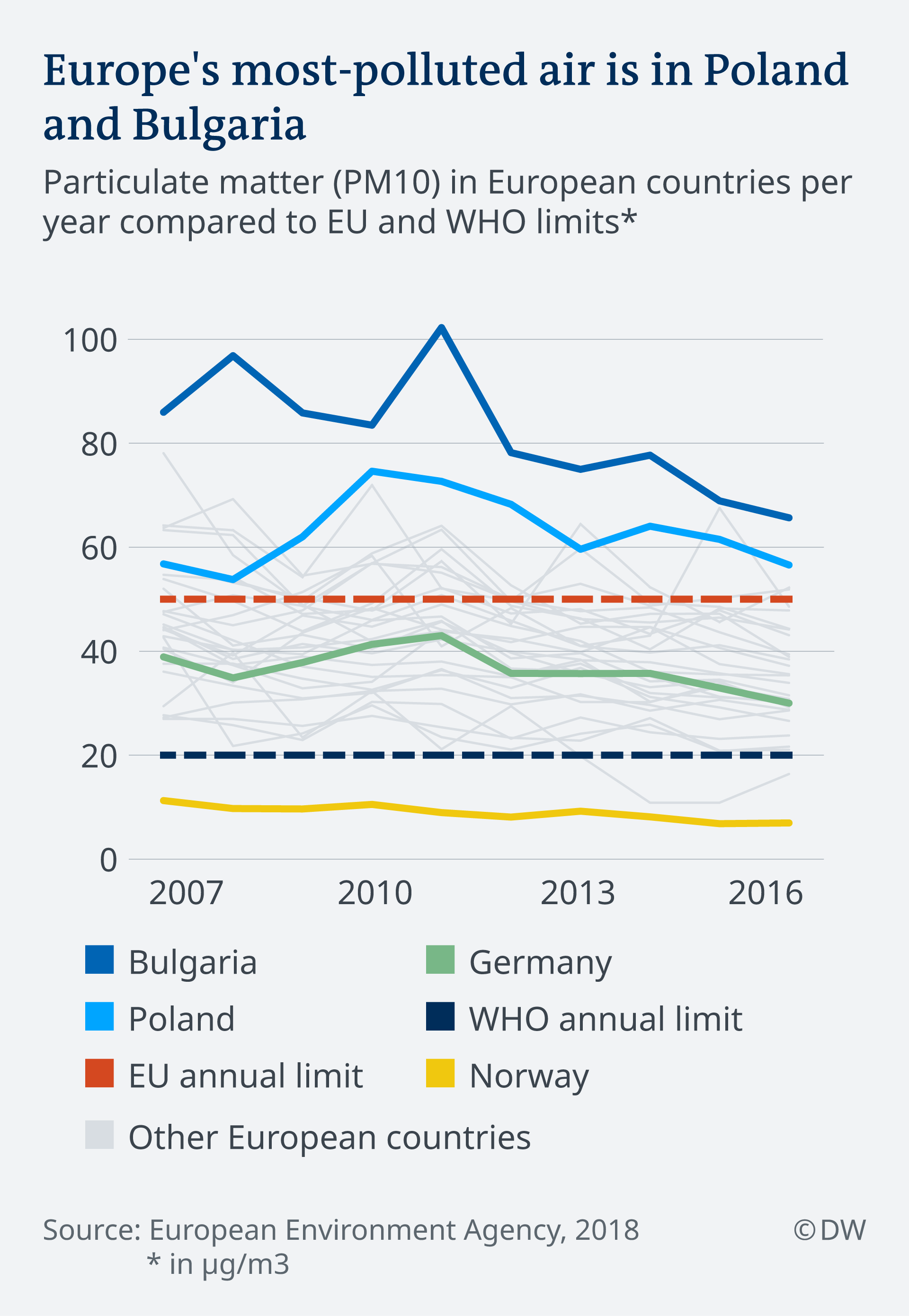 Bulgaria is the most-polluted country in the EU, with the highest number of premature deaths due to air pollution. Most of these, too, are linked to fine particulate matter from heating systems, González said.

Norway, on the other hand, is the only country in Europe that has air pollution levels well below WHO safety standards (which are significantly stricter than EU limits) — mainly the result of effective governmental policies, such as promoting clean mobility.

Poland, host of the COP24 climate conference this December, comes second after Bulgaria on the list of European countries with poor air quality and premature deaths due to particulate matter pollution. If deaths related to all types of air pollution are counted, Poland is ranked fourth.

If all three main pollutants are considered, Poland ranks sixth for deaths due to air pollution in Europe.

According to the WHO, 33 cities in Poland were among the 50 most-polluted cities in Europe in 2017. One of these is Katowice — where the climate conference will take place.

If you plan to attend, be prepared to hold your breath, activists warn half-jokingly.

More than half of fine particulate matter emissions in Poland come from home heating. Transport generates about 10 percent, while industry and the energy sector together produce about 25 percent.

"It doesn't mean transport is not a problem," Gula pointed out. Transport contributes greatly, for instance, to toxic nitrogen oxide pollution.

Poland's continued reliance on coal power also continues to be a factor in the air pollution problem. 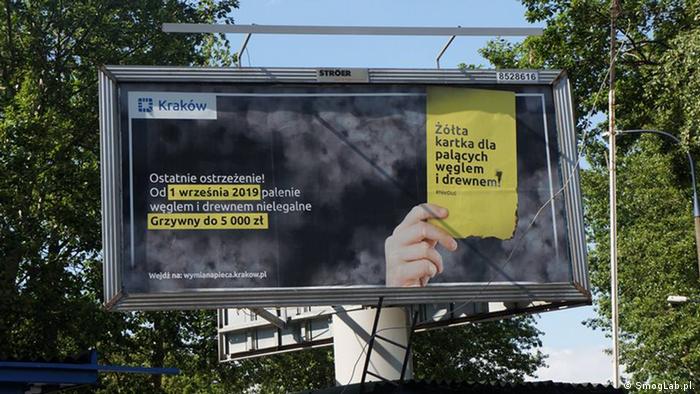 Billboards in Krakow remind people to change their heaters before September 2019 — otherwise, they'll get a yellow card

Pressure from the EU has also led to a turning point, said Przemyslaw Hofman, director of the low-emission economy department in the Polish Ministry of Entrepreneurship and Technology.

The Polish government has finally banned the sale of boilers that lack emission controls, and has announced a €25 billion ($26.8 billion) clean air program to help its citizens trade in old heaters for cleaner ones over the next 10 years.

And some local authorities are a step ahead. Most coal heating in Krakow have already been replaced with cleaner alternatives, such as gas or district heating networks.

And the city will soon implement Poland's first ban on using coal and wood for heating. Such bans have proven effective, for example in China.

Meanwhile, the EU is carrying out its Clean Air Policy Package, which is expected to considerably reduce air pollution by 2030.

If EU member states apply the bloc's policies, the number of premature deaths due to air pollution could be reduced by more than half by 2030, the European Commission has said.

So what are we waiting for?

Katharina Wecker developed the infographics for this story.

If Hanoi wants clean air, residents in the Vietnamese capital are going to have to kick their moped habit. Or at least trade in polluting models for cleaner alternatives. (16.10.2018)