Climate finance poses hurdle ahead of COP24 | Environment | All topics from climate change to conservation | DW | 11.09.2018

The goals of the Paris Climate Agreement are well-known, but how to reach them is still an open question. In December, the world's nations will agree on the rules, but what about the finance? 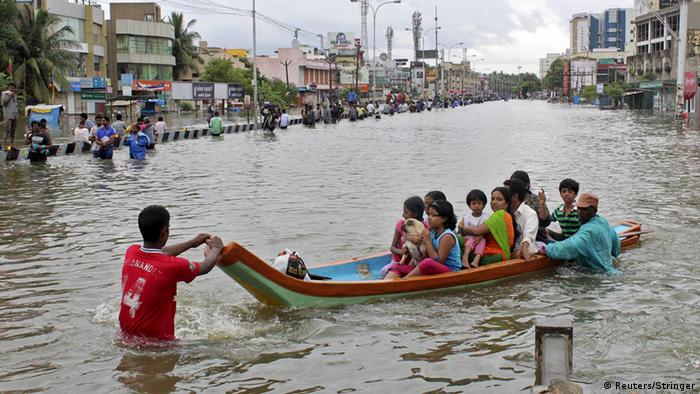 This year's UN global climate talks in Katowice, Poland are being billed as the most important Conference of the Parties (COP) since Paris in 2015, when the landmark Paris Agreement on climate change was agreed upon.

In the French capital, almost 200 countries pledged to limit global warming to well below 2 degrees Celsius (3.6 degrees Fahrenheit). How the world's nations will actually do that is supposed to be decided in Katowice this year.

Member states are expected to adopt a rule book outlining how countries monitor their greenhouse gas emissions and report their climate protection efforts, as well as how much money industrialized nations will give to poorer countries to help them reduce their emissions and adapt to a warmer world.

Droughts are hitting farmers around the world, prompting some to turn to drought-tolerant crops

Climate diplomats have spent years drafting the rules. Their last working session before the upcoming COP24 in Katowice closed in the Thai capital, Bangkok, on Sunday. With mixed results.

Negotiators agreed on issues of transparency, compliance and the Global Stocktake — a comprehensive assessment of how much progress has been made every five years. But contentious issues remain unresolved. And climate finance is the big one.

Read more: Footing the bill for a global crisis

Industrialized nations have been responsible for around 80 percent of emissions over the last 150 years. But it's those who live in poor countries in the global South who are suffering most from climate change.

Under the Paris Agreement, richer countries committed to helping poorer ones cope with the changing climate and develop their own economies without the intensive use of fossil energy that fueled the global North's rise to dominance. But so far, they haven't been paying up as pledged.

Industrialized nations agreed to spend a total of $100 billion (€86 billion) per year — including funds and development aid — on climate protection in poorer countries.

Part of that sum was to be made available through the UN Adaptation Fund and the Green Climate Fund, which aims to make economies in developing countries more climate-friendly while also supporting adaption efforts.

More than $10 billion was pledged to the Green Climate Fund, of which $3.5 billion has been paid so far.

Developing countries want developed ones to ramp up their spending and report on the extent to which they have met their pledges every two years, so they can predict how much money is coming. Developed nations argue that their budgetary rules make this difficult.

Gebru Jember Endalew, chair of the Least Developed Countries (LDC) Group, which consists of the 48 poorest nations signed on to the UN's climate framework (UNFCCC), says climate finance is a make-or-break question for many developing countries.

"The Paris Agreement cannot be implemented without climate finance," he said in a statement.

"The failure of rich countries to deliver adequate resources has severe ramifications for people and communities in the Least Developed Countries and around the world that are already bearing the brunt of climate change on a daily basis," he added.

Climate finance is 'not a handout'

Money has always been a contentious issue at climate talks. But President Donald Trump's decision to withdraw the United States, a major donor country, from the Paris Climate Agreement has created a lot of uncertainty and badly shaken confidence among developing countries that rich nations will stick to the deal.

Adding to that, industrialized countries have been campaigning for a broad range of financial contributions to count as climate finance, including bilateral aid.

Developing countries reject this. Climate finance isn't charity, it's about justice, they say. "Climate finance is not a handout," Amjad Abdulla, chief negotiator for the Alliance of Small Island States at the United Nations, said.

"Developed countries are responsible for the vast majority of historic emissions, and many became remarkably wealthy burning fossil fuels. Small islands, by contrast, have contributed an almost immeasurably small fraction of global emissions. Yet, we face devastating climate impacts and some of us could be lost forever to rising seas," he added.

Experts agree there needs to be a shift in how the international community perceives climate finance. After all, investments in climate protection in poorer countries benefit everyone.

However, the debate about what counts as climate finance and what doesn't is "complicating matters," Jennifer Tollmann, climate diplomacy expert at the think tank E3G, argues.

"The reality is that we are no longer only dealing with traditional climate finance. The structural transformations we need to see will require massive amounts of private finance as well," she said.

Besides governments paying for climate change adaption, there is the question of how to get private investors and companies to invest in climate-friendly initiatives and sustainable infrastructure, such as renewable energy systems.

"We certainly want to see donor countries meet their $100 billion goal and to replenish the Green Climate Fund in the future, but we also need to figure out how to leverage private finance and 'shift the trillions'," Tollmann said.

The climate talks in Bangkok ended with more than 300 pages of draft text , and no decision on climate finance.

Lead negotiators now have less than three months to streamline the draft before they hand it over to national diplomats in Katowice, who will then have five days to wrangle over technical details before ministers step in to make final decisions.

Rixa Schwarz, climate policy expert at NGO Germanwatch, observed the talks in Bangkok. She says real political will and commitment from political leaders in developed nations is essential.

"Industrialized countries need to ensure reliable climate financing so that climate protection as well as adaptation can be made possible around the world," Schwarz said.

Ahead of COP24, climate leaders will meet at events including the Global Climate Action Summit in San Francisco from September 12 to15, Climate Week NYC at the end of this month and the Green Climate Fund board meeting in October.

Observers hope to see some sign that politicians, civil society and the private sector are serious about climate protection — and coughing up the money to make it possible. But few expect the thorny debate over climate finance to be resolved in time for the global climate talks in Katowice.

An international day of protests over climate change has taken place in cities around the world. It was designed to coincide with UN talks aimed at breathing life into the Paris Agreement. (08.09.2018)