Whatever it takes? Unpicking Draghi′s legacy | Business | Economy and finance news from a German perspective | DW | 24.10.2019

Whatever it takes? Unpicking Draghi's legacy 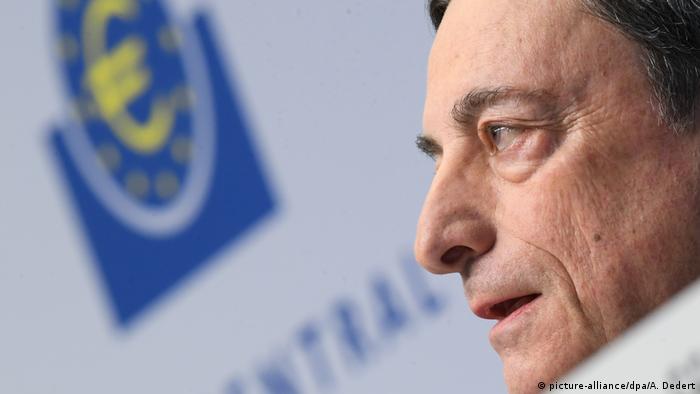 The 72-year old is perhaps best known for the phrase "whatever it takes" when confronted with the euro crisis in 2012.

The fallout from the financial crises of 2008 and 2011 nearly brought down the then still nascent euro, and Draghi's assessment was that a big rescue mission needed to come via huge cash injections and historic low interest rates, aimed at boosting growth and also inflation.

This so-called Quantative Easing (QE) earned him the wrath of conservatives, especially in Germany, for undermining savings, a shibboleth of Bundesbank policy for decades and one that was baked into the European Central Bank's (ECB) strategic mission and culture from its inception in 1999.

Not so Super Mario

Draghi's legacy will no doubt cover employment growth in the eurozone, but some argue he has fallen far short there and also on his primary mandate concerning inflation. Consumer price growth over Draghi's eight-year term has averaged 1.2%, short of the goal of below, but close to, 2%.

Germany has had sound job creation, but this actually started before Draghi's term. France is not far behind, but labor markets in Spain and Greece haven't made up the lost ground and no country has done worse than Draghi's native Italy in terms of total output per head.

Both structural and cyclical problems are hurting economic activity in the 19-member euro-zone. QE has been good in containing the debt crisis, but critics say it has been ineffective in providing sustainable growth. The previous consensus growth forecast of about 2% for 2019 in the eurozone is now around 1%.

What began a month ago as a row triggered by Draghi's insistence on another round of QE, against opposition from central bank governors in the eurozone's core countries, is now becoming a wider argument over his legacy of loose monetary policy.

The ECB approved in September the latest, and probably the final, package of eurozone stimulus measures under Draghi: more negative interest rates and another bond-buying program.

"This zero- and negative-interest-rate policy is so controversial because it makes it so much harder for people to make old-age provisions," Mayer said.

"There's an increasing likelihood of more people facing old-age poverty while the owners of real estate and shares are profiting from Draghi's policy — but these people are an absolute minority in Germany."

Draghi had to face hawks— in particular the Germans and Dutch — who boycotted every new expansionary measure.

"The politicians and the regulators have told us they fixed the banking system and insurance system in terms of this negative spiral of financial sector risk morphing into sovereign risk and [looping] back," Oliver Baete said. "It is the biggest nontruth that exists."

Draghi's tenure has been an "incredible transformation," former chief economist at the IMF, Olivier Blanchard, said.

But Draghi's successor, Christine Lagarde, will face a choice: continue the dovish stance of her predecessor or listen more closely to German bankers again.