Although the ECB is legally prohibited from becoming a lender of last resort, analysts and experts are concerned that the central bank is circumventing its own rules and buying bonds through the backdoor. 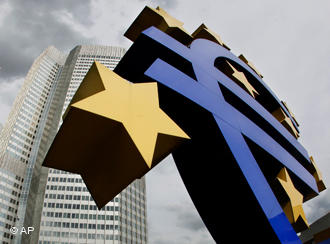 The ECB has become a 'bad bank'

For many financial market experts, the European Central Bank (ECB) is the last hope for containing the sovereign debt crisis in Europe. The highly indebted states within the 17-member euro currency zone as well as Great Britain and the US continue to demand that the ECB fire up the presses and flood the market with cheap money.

In Washington, the Federal Reserve - the US central bank - has printed money for years to ease its economic woes, a policy it calls "quantitative easing." The Bank of England also adheres to this prescription. But ECB chief Mario Draghi and the German Central Bank are strict advocates of monetary stability.

Draghi rejects "quantitative easing" out of concern that it could trigger inflationary pressures. He also does not want to bring out the proverbial "bazooka," which would allow the ECB to directly purchase bonds of indebted eurozone states. Europe's chief central banker points out that this would violate the EU's treaties and statutes.

The ECB, headquartered in Frankfurt, is the only institution that can act quickly, whereas the rest of the EU takes months to implement measures to fight the euro crisis. When Draghi, the former central bank chief of Italy, took over the reins of the ECB in early November, he only had a few days to become familiar with the material and draft a plan of action.

The ECB chief wants to buy bonds from Greece, Italy, Portugal and Spain only on the secondary market. This is the approach that Draghi's predecessor, Jean Claude Trichet, used in order to reduce the cost of borrowing for the highly indebted eurozone states. German Central Bank chief Jens Weidman, who sits on the ECB's supervisory board, has criticized the buying of bonds with this method.

Draghi is now pursuing a different concept, which he developed during a closed-door meeting with bank managers in November. Distrustful European banks, which no longer lend money to one another, have been receiving an unlimited amount of credit from the ECB with a three-year maturity at extremely low interest rates. At the same time, Draghi has dropped interest rates to a record low of one percent.

During the World Economic Forum in Davos, Switzerland last January, the ECB chief said that the eurozone had prevented a major credit freeze and a serious financial crisis. The banks in Europe have borrowed almost 500 billion euros ($662 billion) from the ECB since December 22, 2011 under favorable conditions in order to maintain liquidity. They are supposed to use the money to buy bonds from the highly indebted eurozone states. This plan was rolled out to a certain extent, and the interest for short-term Italian and Spanish bonds did sink.

Draghi, however, has made clear that the he cannot force the banks to use the money the way he wants; that is, to invest it in the real economy and in bonds. The ECB chief has said that time will tell if the policy has worked, but that in the meantime there are regions where credit has begun to flow more-or-less normally.

The ECB is flooding banks with cheap money so that those same banks can buy the bonds of highly indebted eurozone countries. This shortcut allows Draghi to circumvent the rules of the EU treaties, which forbid the direct purchase of government bonds by the central bank.

Angsar Belke, a money market expert with the German Institute for Economic Research in Berlin, criticizes the ECB for buying bonds through the backdoor. Andreas Schmitz, president of the Association of Private German Banks, has on the other hand praised the pragmatism with which Draghi has tried to defuse the crisis.

The ECB wants to offer banks more cheap money at the end of February. The sum could approach one trillion euros, according to anonymous sources on bank boards cited by the Financial Times. These sources said that they would happily accept the ECB's offer, because for the banks there is no risk and a good chance for profits.

ECB is becoming the de facto lender of last resort

As ECB president, Draghi participates in every one of the EU's numerous summits. Officially, the central bank's policies are not coordinated with elected officials. German Chancellor Angela Merkel has said that the various national governments "cannot issue the ECB instructions."

But Draghi, of course, knows what the politicians expect from the legally independent central bank. He has praised the fiscal compact that aims to tighten budgetary discipline while German Central Bank chief, Jens Weidman, views the compact critically.

Some analysts also expect that the ECB will participate in the debt-forgiveness scheme for Greece. Up until now, only private investors and banks have bled. Although the ECB holds 50 billion euros in Greek bonds, making it Athens biggest creditor, the central bank has rejected debt forgiveness. But in light of the disastrous situation in Greece, the ECB could give in. The eurozone states would carry the losses.

In total, the ECB has 200 billion euros in high-risk government bonds on the books, which it bought up last year. Oliver Holtemöller, with the Halle Institute for Economic Research, views the ECB as a giant "bad bank" because it holds these junk bonds. Eventually, the taxpayer will have to shoulder the losses.