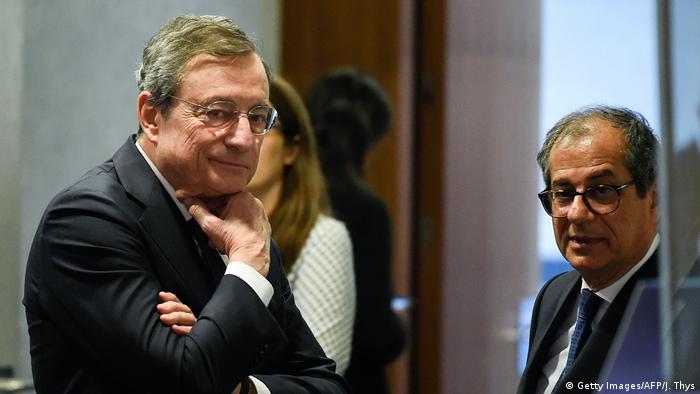 Addressing an ECB forum in Portugal, Draghi said that "additional stimulus will be required" if inflation remained low. He also said that "further cuts in policy interest rates ... remain part of our tools."

Despite ECB's ongoing efforts, the annual inflation of 1.2% is still far below the bank's target of about 2%. However, Draghi's Tuesday remarks immediately boosted euro inflation against the dollar by up to 0.3%.

Plowing ahead with stimulus

The Tuesday statement marks a course change for the Italian banker, who took the reins at the ECB in late 2011. The ECB had launched an unprecedented stimulus program to deal with the eurozone debt crisis. With the EU economy slowly stabilizing in recent years, the central bank was preparing to normalize its monetary policy. However, it appears that fears of no-deal Brexit, a US-China trade war, and US sanctions on the EU prompted Draghi to stick with the stimulus and potentially expand on it.

Currently, the ECB is charging banks 0.4% to keep their funds. The negative interest rates push retail banks into lending out more money, thus stimulating the economy and boosting inflation. Another measure is "quantitative easing" (QE), which sees ECB buying government and corporate debt.

Decision to come in July

Draghi dismissed concerns that the ECB was running out of ammo for any new stimulus measures after years of trying to boost the economy. He underlined that some of ECB's self-imposed rules, such as a ban on buying more than one-third of a particular country's debt, could be changed.

"[We] will use all the flexibility within our mandate to fulfill our mandate — and we will do so again to answer any challenges to price stability in the future," Draghi said on Tuesday.

The 71-year-old banker also said the ECB would use the coming weeks to consider its options. The bank's policymakers are set to meet again next month.

The news from Portugal prompted an angry response from US President Donald Trump. The president accused Draghi of trying to weaken the euro to gain an unfair advantage in international trade.

"Mario Draghi just announced more stimulus could come, which immediately dropped the Euro against the Dollar, making it unfairly easier for them to compete against the USA," Trump wrote on Twitter. "They have been getting away with this for years, along with China and others."

Draghi soon fired back at the US president, rejecting the accusations.

"We have our mandate," the banker said. "Our mandate is price stability ... We are ready to use all the instruments that are necessary to fulfill this mandate, and we don't target the exchange rate."

Trump has already accused China and Germany of artificially bringing down the value of their currencies, but his administration stopped short of officially labeling them currency manipulators.