What you need to know about the French presidential election | Europe| News and current affairs from around the continent | DW | 24.02.2017

After a campaign full of surprises, France is voting today in what is expected to be a tightly-contested presidential election. DW has rounded up the best content to keep you informed.

The election candidates are the independent Emmanual Macron, Francois Fillon of the conservative Les Republicains, Benoit Hamon of the Socialist Party, Marine Le Pen of the far-right Front National and Jean-Luc Melenchon, who is supported by the Communist party.

The first round of voting takes place on April 23 with the top two candidates then facing off in a decisive second round on May 7.

Current polls suggest that Marine Le Pen will only become the second Front National candidate after her father in 2002 to reach the run-off. But who she will face is still up in the air in a race that has been hit by scandal.

The main conservative candidate began the campaign as clear favorite on a ticket of business-friendly reforms. But after he faced accusations of paying his wife hundreds of thousands of euros for a job she never did, his ratings plummeted.

For a candidate promising to tackle corruption, the scandal hit hard. Fillon is under investigation and faces a real fight to save his candidacy after polls revealed a majority of voters want him to withdraw.

The former investment banker entered politics under Francois Hollande. First, he served as the president's advisor and then he became minister of economic affairs. In 2016 he resigned as minister and left the Socialist party. He founded the party "En Marche!" (On The Move!) and announced his candidacy for the presidency. That is why many representatives of the Socialist Party consider him to be a traitor.

However, in light of the left's weakness, the 39-year-old has become a beacon of hope for those who do not want to see the conservative Catholic Fillon or the right-wing Le Pen in the Elysee Palace. And now, even prominent Socialists, such as former presidential candidate Segolene Royal, stand behind him. Macron wants to reform the EU and revive the French-German friendship and emphatically praises Chancellor Angela Merkel's refugee policy.

Marine Le Pen's policy of un-demonizing the right has made the National Front (FN) socially acceptable in mainstream society. Nonetheless, the party platforms are still at the far right end of the political spectrum.

Read: National Front tones down manifesto ahead of presidential elections

Like Fillon however, Le Pen has also been hit by the fake jobs scandal. Police raided Front National offices to determine whether the party misused EU funding to pay staff for fictional jobs.

Although polls give her little chance of winning the second round of voting, no scenario is off the table after Brexit and Trump. The Fillon scandal could play into her hands and her supporters remain optimistic.

Read: On the French election campaign trail in the Le Pen 'laboratory'

Once a distant fifth in the running for the French presidency, the Communist-backed candidate's trademark quick wit and eloquent anti-capitalist discourse delivered over two televised debates have catapulted him into third in the polls, according to surveys.

Read: What's behind Melenchon's surge in the polls

He hopes to profit from the center-left's disarray, but may split votes with socialist Hamon. Supported by the French Communist party, Melenchon advocates a shorter work week and climate protection.

The sudden surge in popularity has seen the firebrand leftist reportedly overtake conservative Francois Fillon, once considered the frontrunner, and to within touching distance of far-right leader Marine Le Pen and centrist Emmanuel Macron. 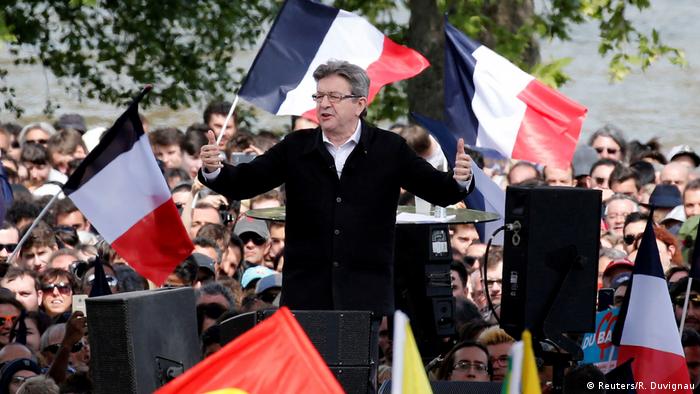 The Socialist candidate surprised everyone by beating Manuel Valls to gain his party's candidacy. The former minister of education is considered to be a sharp critic of President Hollande and stands for the leftward shift of French Socialists.

Hamon wants to raise the minimum wage, abolish the liberalization of labor laws, legalize cannabis use and create 37,000 teaching jobs. Political commentators in France consider Hamon's stance to be utopian. Polls predict that he will garner around 8 percent support in the first round of the presidential elections.

Read: After Hollande, the end of the Socialist Party of France?