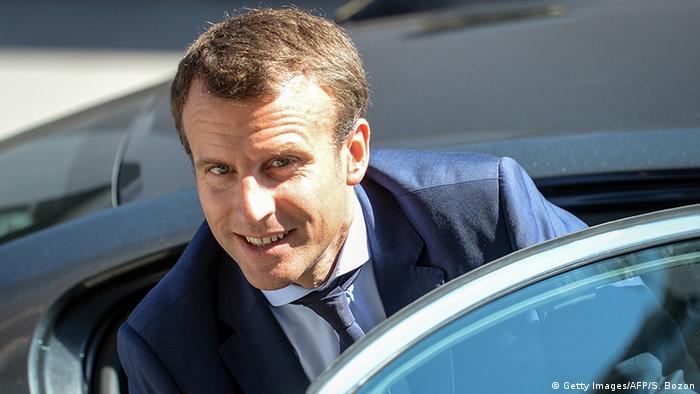 The 38-year-old Macron is seen as a charismatic political newcomer who may be inclined to shake things up. Almost all of his potential rivals for France's top job have issues, either in terms of governance or in policy. (15.11.2016)

France's former economy minister, Emmanuel Macron, has formally announced his bid for the presidency in next year's poll. He said he was entering the contest as an independent candidate. (16.11.2016)

The most popular of France's presidential candidates, Emmanuel Macron, took a stance against anti-refugee sentiment in an interview with German daily Süddeutsche Zeitung, which was published on Monday.

The 39-year-old politician voiced admiration for Angela Merkel and Germany for their handling of the refugee crisis.

"Chancellor Merkel and the German society as a whole were up to the mark of our joint values," he said. "They saved our collective dignity by taking in refugees and providing them with accommodation and education."

Macron also slammed the critics of Merkel's refugee policy, who claim that Islamic terror strikes in Berlin and elsewhere are a consequence of her opening doors to newcomers.

This argument is a "hideous oversimplification" he said.

Macron quit Hollande's cabinet to run for president in April this year. Although he is very popular among the voters and has a roughly 35-percent approval rating, the former investment banker would need to contend both with competition from the well-established parties and Marine Le Pen, who is running on the far-right Front National ticket.

Stronger EU is the solution

The independent candidate urged the EU to create a "joint intelligence system," in the interview published on Monday.

"Terrorism wants to destroy Europe," Macron told Süddeutsche Zeitung. "We need to create a sovereign Europe, and fast – a Europe capable of protecting us from outside dangers, and boost inner security by doing so."

Macron, who resigned as economy minister under Socialist President Francois Hollande in August, called for boosting Frontex, the agency responsible for protecting the EU's outside borders. He also chided Berlin and Paris for not supporting Italy during the early years of the refugee crisis, when thousands of immigrants started pouring onto the island of Lampedusa.

"The solution is stronger European cooperation and not the ineffective bordering off of nations," Macron told the newspaper.