An opinion poll in France has indicated 65 percent of respondents want Francois Fillon to withdraw from the presidential election. But he has changed his mind and said he will stay in the race, come what may. In the poll for Sunday newspaper JDD, a poll, based on 1,004 interviews with French voters, showed 65 percent of respondents wanted conservative candidate Francois Fillon to withdraw from April's presidential elections.

On Friday, Fillon said he would stay in the race come what may. Previously he had said he would withdraw if he was put under formal investigation concerning payments made to his wife, Penelope, for work she may not have done.

Last week a financial prosecutor investigating the nearly million euros paid to Fillon's wife and children from public funds said the evidence gathered meant the case could not be dropped.

"The investigations will continue with strict respect for the rules governing the code of criminal procedure," the statement from the National Financial Office (PNF) said on Thursday.

The investigation by the PNF is expected to continue for some time. After a preliminary investigation, prosecutors will decide on a follow up. If charges persist, either a direct summons will be issued or investigating judges will be entrusted with the case. In the three years the PNF has been active, it has preferred direct summons.

In the Ifop poll, members of Fillon's "Republicains" party were more supportive. There was a rise of six points, to 70 percent, for those who said they wanted him to stay in the race for the presidency.

In the major poll in February on voter intentions, the Ipsos-Sopra Steria survey of 15,874 people published by "Le Monde" newspaper and conducted between February 7 and February 12, Fillon was trailing Emmanuel Macron, a former banker and economy minister in the socialist government.

The poll gave Macron, who heads his own "En Marche" political group, 23 percent support over 18.5 percent for Fillon. Far right candidate Marine le Pen of the National Front (FN) leads polling for the first round on April 23 with 26 percent but all surveys indicate she would lose in the second round run-off two weeks later in May, whoever she stands against. 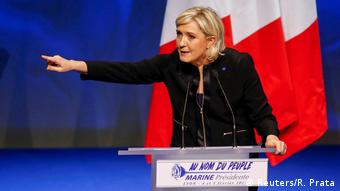 Le Pen is also facing questions concerning payments she made at the European Parliament. European anti-fraud investigators (OLAF) have been reported by investigative website "Mediapart" and weekly "Marianne" as saying that Le Pen had admitted using parliamentary funds to pay her bodyguard, Thierry Légier, a total of 41,554 euros ($44,110) between October and December 2011 by falsely claiming he was an EU parliamentary assistant. However, le Pen denied the reports, saying on radio "France Bleu Besancon" that she "never admitted such a thing to investigators."

Fillon has blamed the media for his problems. The satirical weekly "Le Canard enchainé" has been at the forefront in publishing  information about the alleged payments made to Penelope Fillon and Fillon's children while they were student lawyers. "This campaign against me is defamatory," he said earlier this month.

A campaign meeting for Fillon on Friday in Tourcoing, close to the border with Belgium, was held behind closed doors after protesters shouted slogans and banged on pots and pans.

Attorneys for the French politician have hit out at financial prosecutors investigating payments made to his wife. Fillon's lawyer has said the prosecutor is "not competent" to investigate the matter. (09.02.2017)

On the occasion of the April 24 election runoff between French President Emmanuel Macron and his rival Marine Le Pen, we travel to the "Grande Nation."