The current front-runner in the France's presidential election has been targeted by a misinformation campaign and hacker attacks, his party chief alleges. The defense minister has promised to invest in cyber security. 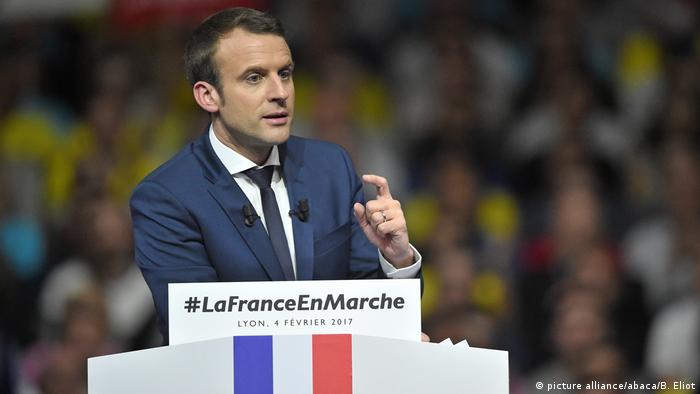 The frontrunner in the French presidential, Emmanuel Macron, has been the target of "fake news" spread by news outlets owned by the Russian state, the chairman of his party told reporters on Monday.

"Two big media outlets belonging to the Russian state, Russia Today and Sputnik, spread fake news on a daily basis, and then they are picked up, quoted and influence the democratic [process]," Richard Ferrand said.

State-owned news agency Sputnik ran an interview with Nicolas Dhuicq on February 4, in which the conservative French lawmaker accused Macron, a former investment banker, of being an agent of "the big American banking system." Russia Today reportedly also picked up the story.

The same Sputnik article also contained disparaging quotes on Macron's private life. Dhuicq claimed that the presidential candidate had an affair with a French businessman who had lobbied for the legalization of gay marriage. Macron had repeatedly denied these allegations. Same-sex marriage has been legal in France since 2013, but many conservatives - including  Republican presidential candidate Francois Fillon - opposed its legalization.

The chief of Macron's En Marche! (Onwards!) also told reporters that Macron's campaign had been targeted by "hundreds if not thousands" of Russian hacker attacks.

Richard Ferrand claimed that Macron - a centrist who founded his own party ahead of the presidential election - was being targeted for his staunchly pro-EU views.

Former economic minister Macron has surged in recent opinion polls and become the favorite to win the two-tier presidential election, after French media published allegations that conservative Francois Fillon - long thought to be the favorite to win - had employed his wife in a "fake job" while he was a member of the French parliament.

A poll published by think tank Opinionway on Monday shows Macron placing second in the first presidential election in April and winning the second election in May.

In France, presidential elections are usually decided in two stages: unless one of the candidates receives an absolute majority in the first election, the two most successful candidates face each other in a run-off election.

Both Marine Le Pen and Francois Fillon have promised to have good relations with Russia during their campaign. Le Pen has also said that she wants France to leave the EU, which could potentially make the country more reliant on ties to Russia. The Front National has also  received loans from a bank with close ties to Russian president Vladimir Putin.

Now that the primaries are over, the real presidential race begins in France. The campaign has already been marked by scandals, surprises and fluid allegiances, reports Elizabeth Bryant from Paris. (30.01.2017)

French nationalists have slammed presidential candidate Emmanuel Macron for addressing a conference in English during a Berlin visit. Macron showed "no respect" for the French language, the National Front (FN) said. (11.01.2017)