What you need to know about Angela Merkel′s CDU | Germany| News and in-depth reporting from Berlin and beyond | DW | 24.09.2017 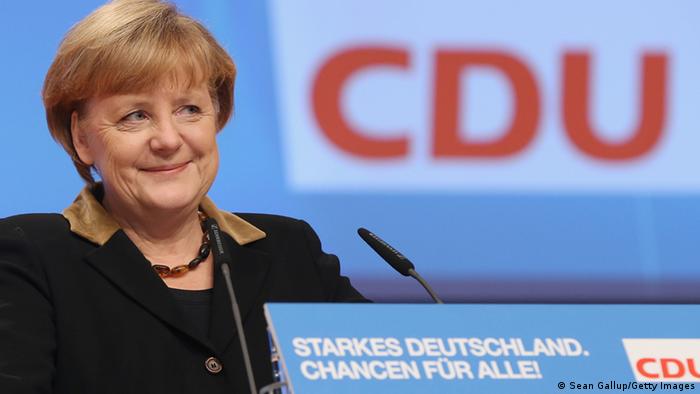 No party has led the German government as often as the Christian Democratic Union (CDU), having occupied the chancellor's office for 48 of the 68 years of the Federal Republic of Germany's existence. But despite that, the CDU is anything but a monolithic or homogeneous political bloc.

If anything, the key to the party's success over the years has been its ability to speak to the political center - and to produce iconic, broadly popular leaders. 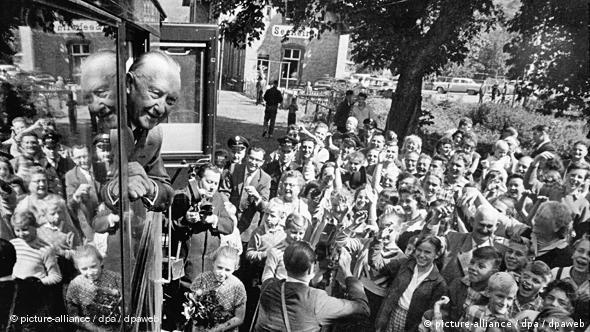 The CDU began coalescing in the immediate aftermath of the Second World War while Germany still lay in ruins, and the first party chairman was very much a man of history. Sixty-nine-year-old Konrad Adenauer was a former mayor of Cologne and member of the Center Party in the Weimar Republic. He had clashed repeatedly with the Nazi regime during the Third Reich and thus had anti-fascist credentials.

Adenauer led the CDU to a 31-percent plurality in the first-ever election in the Federal Republic in 1949, becoming chancellor by a single vote (in essence, his own) in parliament. But although Adenauer initially just scraped into power, the party gained in popularity, the four governments he led were very stable, and the CDU came to be seen as the guarantor of German solidity and prosperity. Campaign posters often featured the slogan "No experiments!"

In many respects, Adenauer set a centrist tone that continues today. He was a staunch advocate for West Germany's alignment of itself with the Western Allies, particularly the US. But he also encouraged the country's rapprochement with Western Europe and especially France and remained convinced that the Federal Republic would reunite with Communist East Germany someday - though it was a day he would never see for himself. 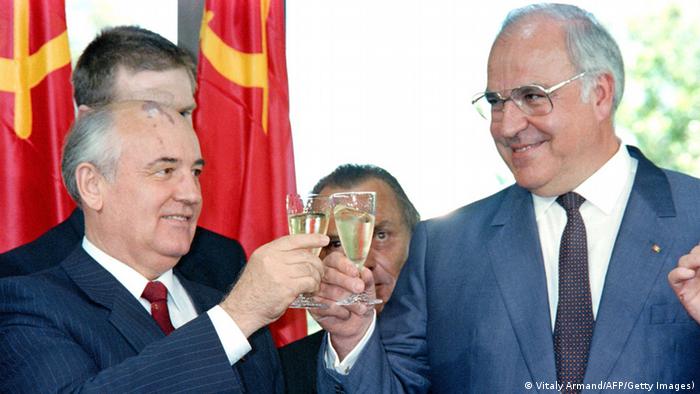 Together with its Bavarian sister party, the Christian Social Union (CSU), the CDU traditionally commands the most votes in Germany, but the party spent 13 years out of power in the late 1960s and 1970s until lumbering Rhinelander Helmut Kohl recaptured the chancellory in 1982. He hardly swept to power, only becoming chancellor because the Free Democrats (FDP) abandoned their coalition with the SPD and formed a new alliance with his conservatives.

Kohl wasn't able to solve the socio-economic problems accompanying reunification, however, and after losing the 1998 election, he left the CDU in the midst of a campaign contributions scandal and a new leadership battle. But from that wreckage emerged the CDU's third notable leader. 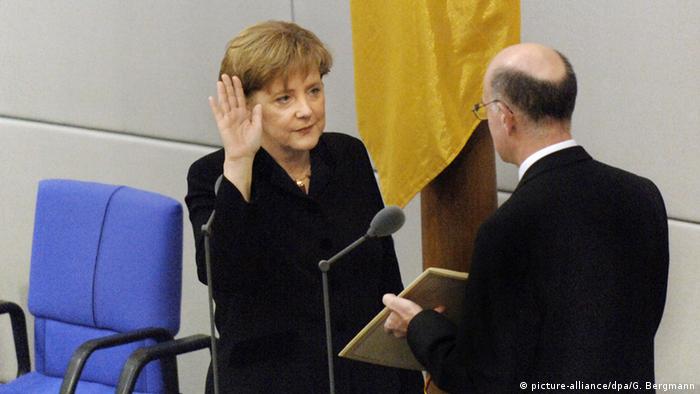 Merkel, too, got off to a rocky start

Like her predecessors, current Chancellor Angela Merkel hardly stormed into office, reluctantly forming a grand coalition with the Social Democrats (SPD) after a close election in 2005 to gain power. But she, too, has grown into the job and consistently ranks as Germany's most well-known, most trusted and most well-liked politician. If there's any one reason why the CDU is vastly outperforming the SPD in opinion polls, Merkel is it.

Like Adenauer and Kohl, Merkel is a centrist and a pragmatist. The position for which she may be remembered best is her welcoming stance toward refugees, which caused her to dip temporarily in the polls and hurt her popularity in the party. But the party has toughened its stance toward migrants and, if nothing unforeseen happens, can look forward to another Merkel-led government after September's election. 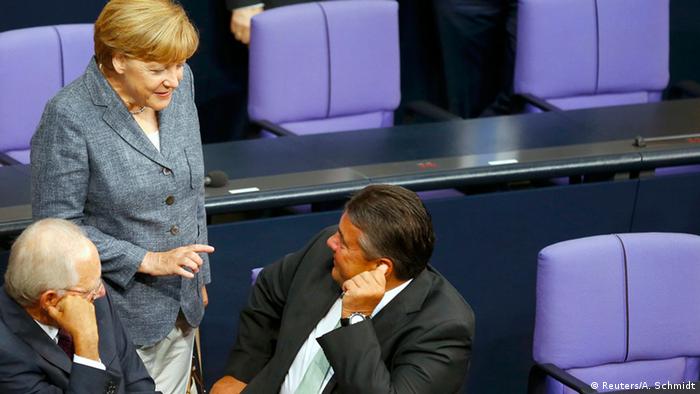 What does the CDU stand for?

These days, as Merkel goes, so goes the CDU, which means that it's moved further toward the center than ever before in its history. While Merkel - a Protestant pastor's daughter - and others pay lip service to Christian values, the CDU is outwardly a secular party, leaving the Catholic-dominated CSU to take up more overtly religious positions.

While the CDU does stand for fiscal stability, it doesn't advocate the sort of hostility toward central government or the social welfare state that's a feature of conservative movements in other parts of the world. Thanks to Finance Minister Wolfgang Schäuble's obsession with cancelling out the country's debt, the CDU is not even particularly keen on cutting Germany's relatively high taxes.

The CDU favors better security at the cost of increased state surveillance, supports using the military to fight terrorism, wants greater assistance for stay-at-home parents and is generally more free-market-friendly than the SPD - which Germany's big businesses reciprocate with large donations. The party is traditionally very positive toward America, but that's cooled markedly of late, as Merkel is anything but a fan of Donald Trump. Many CDU members reject gay marriage and abortion, but German conservatives are on the whole far more liberal socially than American ones. Ever the pragmatic tactician, Merkel opened the door to legalizing gay marriage late in this legislative period by allowing a conscience vote in the Bundestag - and then voted against it herself.

The party has defied Merkel on some ancillary issues, for instance by coming out on paper against dual citizenship, but in the main, it's clear who wears the pants in the CDU - and that's Merkel. Critics say the chancellor is more interested in smooth governance than ideology, and Merkel herself might very well not disagree with that assessment. Come to think of it, "No experiments!" wouldn't be such a terrible slogan for her party in the 2017 election, either.

Read: Merkel and the rise of the right 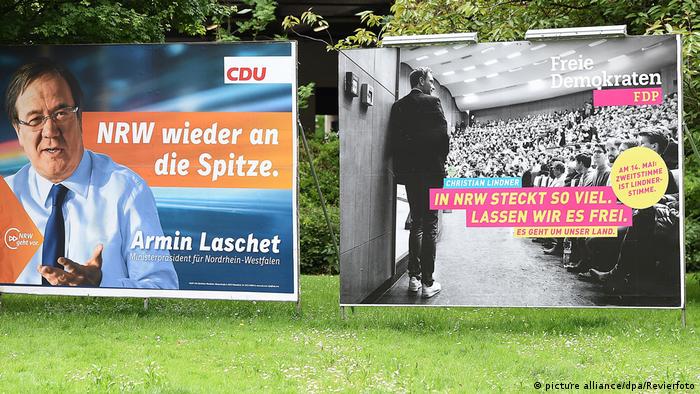 The roads to re-election

In this election the CDU has lost over 8 percent compared to 2013, when it polled 41.5 percent. That could reflect the fact that some voters abandoned Germany's biggest party for the right-wing populist Alternative for Germany (AfD).

A CDU-FDP-Green party three-way deal is something high-level sources within the CDU say that Merkel, who initiated Germanys phase-out of nuclear power after 2011, is quite favorably disposed to.

Read: How does the German general election work?

Who would have thought? She was seen as a stopgap after Helmut Kohl. But for the last 16 years she has led the CDU and for the last 11, she's led Germany's government. And the Merkel era may well continue. (21.11.2016)