What will be the future of tourism in Venice? | Europe| News and current affairs from around the continent | DW | 16.06.2020

What will be the future of tourism in Venice?

Thanks to COVID-19, Italy's lagoon city has been unusually empty, but visitors are now slowly trickling back. Some Venetians welcome the crowds, while others fear nothing more than the return of the rattling suitcases.

On St. Mark's Square a seagull snatches a tinfoil-wrapped sandwich right out of a young boy's hand. He laughs in shock, and his mother pulls him on. The high likelihood of a hungry bird stealing your food is one of the disadvantages of having one of Venice's most famous landmarks more or less to yourself.

The square is usually swarming with people from every corner of the world. Some treat themselves to an overpriced coffee in one of the nearby cafes or a souvenir emblazoned with the word "Venezia," while others are tempted by the famous museums. Many just stop for a selfie. 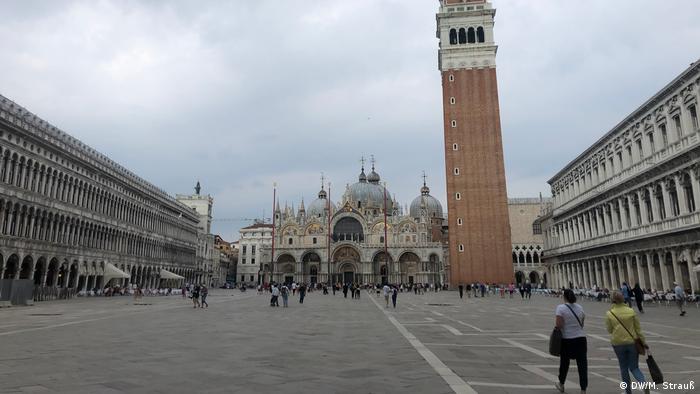 St. Mark's Square, usually teeming with tourists, is nearly empty thanks to coronavirus

But right now nothing in Venice is normal — though it is slightly more so than before June 3. That was the day after which EU citizens were allowed to travel to Italy without having to go into quarantine for 14 days upon arrival.

It was also the day that was supposed to herald the return to some kind of everyday life, after several hard months of strict curfews. Italy was the first European country to be affected by the coronavirus — and its death toll is among the highest worldwide.

But hard as things were — and still are — COVID-19 did give Venice a little breathing space. According to official statistics, 12.5 million people stayed the night here last year. On top of that, an estimated 15 to 16 million took a day trip to the city.

That's far too many, says Jane da Mosto. She arrives on the Rialto bridge Sunday morning to find a few tourists already there, taking photos of the boats bobbing aimlessly on the Grand Canal, which winds through the heart of the city.

Da Mosto, who was born in South Africa, is married to a Venetian. She has lived in the city with him and their four children for the past 25 years. 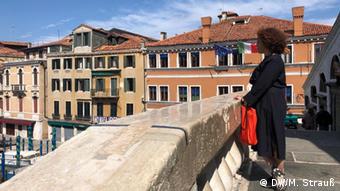 Da Mosto, an environmental scientist and expert on sustainable development, describes her adopted hometown as a lemon being "squeezed out" by the local government, or a cow that's being "milked." Her initiative "We Are Here Venice" opposes cruise ships and mass tourism in general, which she believes is destroying Venice's essential character.

It makes her especially angry that very few people are still want — or are able — to live in the city itself. Many landlords find it far more lucrative to rent their properties to tourists than to a family with an ordinary income. The population of Venice currently stands at just over 51,000.

Da Mosto is calling on the local government to create incentives so that Venetians can find jobs in sectors besides tourism. "My four children love the city, and they want a future here," she says. 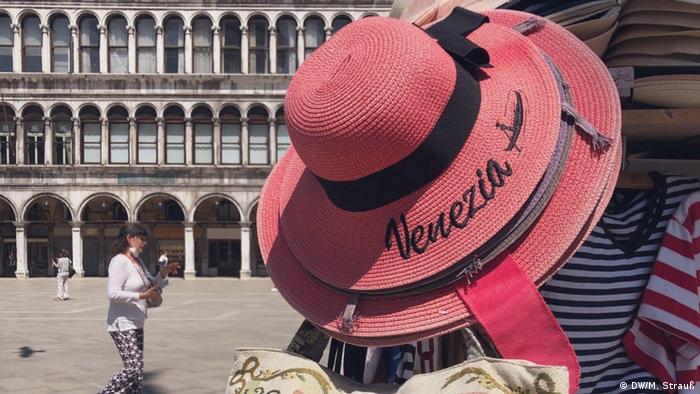 The tourists may not be there in swarms, but there are still souvenirs aplenty

Like 65% of all people living in Venice, Nicolo Bortolato depends on visitors for his livelihood. The kind of customers he would ideally like to welcome to his hotel are the same ones da Mosto would like to welcome to the city as a whole: People visiting Venice because they're interested in the place itself and want to immerse themselves in its thousands of years of history.

Ten years ago, Bortolato and others converted the Palazzetto Pisani, a well-known building in Venice, into a hotel. Those who stay here get not only bed and breakfast but also a certain Venetian flair. The walls are covered with paintings, and there's a salon with antique wooden furniture where guests can sit and chat. 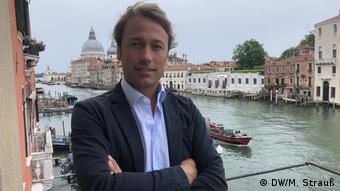 Bortolato would prefer to see guests spend more when in Venice

These are the kind of tourists many in Venice would like to see: travelers who like (and are able) to spend a little bit more.

Even the woman whose job it is to lure as many visitors as possible to the city says things can't continue as before. Paola Mar, the city official in charge of tourism, was actually planning to introduce entrance fees starting July — but then the virus came along, and now everything has been postponed.

Mar lives on the mainland. Her critics say that she has no idea what it's like to have to force your way through crowds of people in order to get to work, or to be rudely awakened every single day by Airbnb guests banging on doors because they've got the wrong apartment. 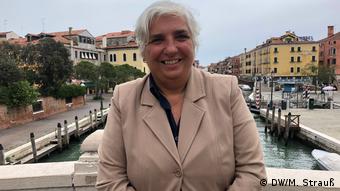 Mar is the city commissioner for tourism

Venice has other problems, too

Asked about the possibility of imposing a cap on the number of tourists — something da Mosto and other activists are demanding — Mar raises her voice and gets slightly angry. How would it be implemented? Mar would prefer to introduce obligatory reservations in an attempt to keep tourist numbers under control.

But for many Venetians, that's not enough. Their city is suffering, not only from too many visitors but also from its sinking foundations. Just last November, Venice was paralyzed by floods that caused terrible damage to many of its houses.

Marco, a gondolier on the Grand Canal, points out how high the water rose. He's one of those people who make their living from tourism. Many of his 400 colleagues are still out of work, he says, adding that he hopes visitors come back soon. 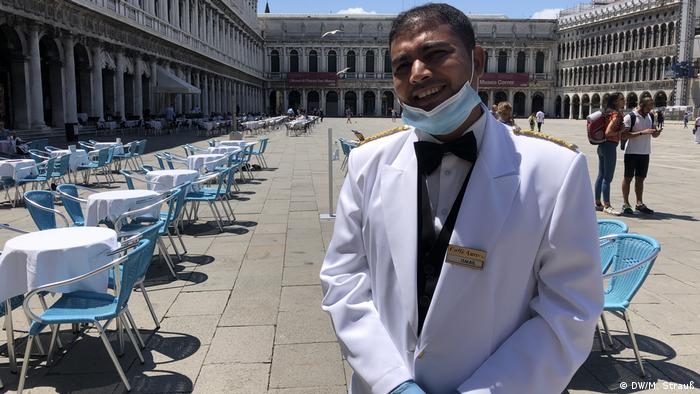 Ismail, whose cafe is on the famous St. Mark's Square, hopes visitors will return quickly

Hossein Ismail, the manager of the Cafe Aurora on St. Mark's Square, feels the same. He chats to his colleagues as he wanders back and forth amid a sea of turquoise chairs. They're empty most of the day, until two women from Germany sit down and complain about the vaporetti, the Venetian water taxis, which, they say, are already overcrowded again.

Germany and France are among many European countries reopening their borders to fellow European travelers, three months after coronavirus lockdown measures went into force. Follow DW for the latest. (15.06.2020)

On June 15, the German government's worldwide travel warning for most European countries will be lifted. How are tour operators and travel agencies preparing for the new start? How willing are Germans to travel? (12.06.2020)