In Venice, the floodwaters recede but the problems pile up | Culture | Arts, music and lifestyle reporting from Germany | DW | 06.12.2019

In Venice, the floodwaters recede but the problems pile up

Now that flooding in Venice has subsided, the city is dealing with the aftermath, from damaged buildings to mountains of trash. Estimating the cost of damages is a difficult business, and many Venetians are frustrated. 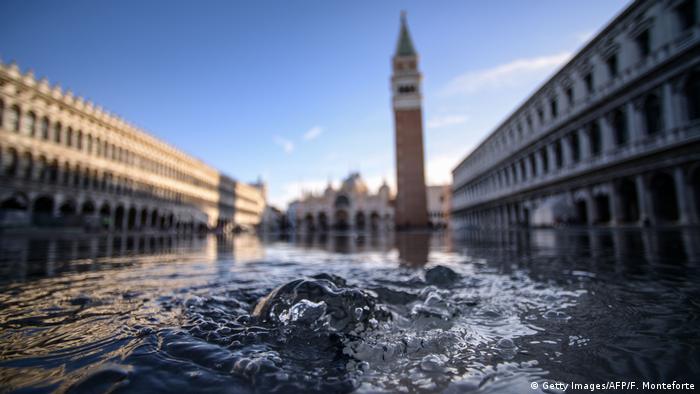 Venice's world-famous  St. Mark's Basilicais included in every damage assessment of the devastating flooding that hit the city in early November, as the crypts of the city's iconic cathedral were filled with water.

The damage from the flooding is substantial. The floodwaters in the city reached an unexpected high of 187 cm (6 feet) above sea level. Countless cultural treasures — palaces, libraries, and churches — remained partially submerged for days in the salty, polluted water.

The situation prompted Venice Mayor Luigi Brugnaro to declare a state of emergency. He has said that damage costs could run as high as €1 billion ($1.1 billion). 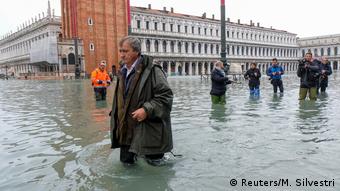 Mayor Brugnaro visited St. Mark's Square during the height of the flooding

The Berlin-based art historian and Venice expert Wolfgang Wolters sees this total as a mere "synonym for catastrophe" and doubts its accuracy. "It is just not that easy to estimate damage," he says, drawing on his experience doing damage inventory for UNESCO in Venice in 1966, after the most devastating floods in the city to date.

Wolters suggests that the responsible authorities launch a similar damage investigation led by international experts, since "before the treatment, there must a diagnosis — and as soon as possible!"

The art historian knows Venice like the back of his hand. Wolters is UNESCO's former Venice adviser and the founding director of the city's German Study Center. He remembers that during the flooding 53 years ago, people showed solidarity against the powerful forces of nature. But today it is "clear that the problem is man-made."

"In Venice gondolas are lying on dry land in front of hotels. There was more than one meter of standing water in the historic cafes on St. Mark's Square. That also holds true for St. Mark's Basilica, which was just restored," wrote Danilo Reato, an author who lives in Venice, on November 13 in emails to his publisher in Germany. "In the Arsenal [Venice's former shipyard and armory complex] one boat was nearly pushed to the end of a small street. Others sank. The anchor rope of another ship ripped, and it had to be rescued by the port authorities. This is really the end of the city!" 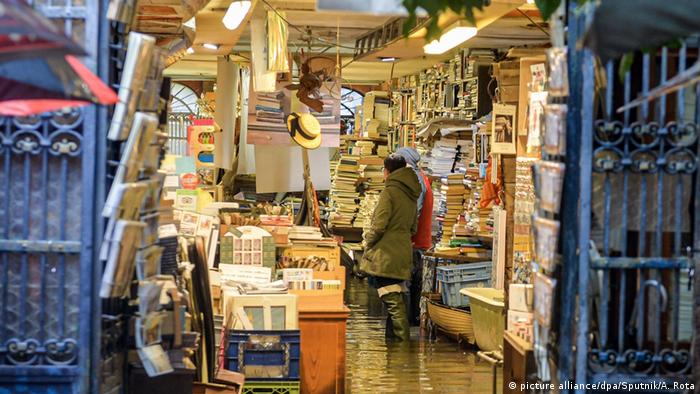 Shops, like this book store above, private homes and cultural institutions all suffered damage from the flooding

In the meantime, the waters have receded from the city. Many Venetians are cleaning out their basements and flooded ground floors. Tons of bulky trash such as furniture and hundreds of mattresses have landed on the sidewalks. "There is trash everywhere," complained Swiss art historian and novelist Erasmus Weddigen, who spends half his time in Venice. 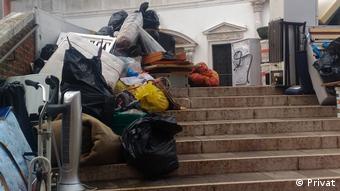 An official damage assessment is yet to come. A UNESCO delegation will travel to Venice next year to investigate the situation. In 2015 the UN's cultural organization had already threatened to strip Venice of its World Heritage status if it could not get its problems under control.

"Even if the waters have subsided and everyone is now breathing again, it will take a lot of time to repair the damage," said Sven Taubert, president of Germany's Association of Restorers. The floodwater activated substance-damaging salts held in the walls of many buildings, he explained. The sea salt and the toxic substances found in the water, like feces and chemicals, also cause damage, he added.

After the Lusatian Neisse river in northeast Germany flooded in 2010, Taubert spent nearly eight years planning and leading the restoration of the affected Cistercian abbey of St. Marienthal. He believes fast action is needed in Venice, since mold spreads quickly in and on moist walls: "You can see how quickly the surfaces turn green, yellow or black!"

"One billion euros sounds like a lot of money," Taubert says. He is calling for people to mobilize for Venice and says it could well be that this much money is needed. Now, he says, the damage to objects, buildings and the neighborhoods of the lagoon sections of the city must be categorized and prioritized.

Following the November floods, Italy's government released €20 million in emergency relief. Private individuals should receive up to €5,000 and businesses up to €20,000. Taubert knows that help can't be everywhere. "But they have to reach out to the people, otherwise the catastrophe will also lead to losers in society," he says.

Anger at the government

Never-ending hordes of tourists, giant cruise ships in the lagoon, flood protection that is wanting, and now climate change with its rising water levels: Many Venetians are increasingly angry with their government and accuse it of failing to act.

Petra Reski, an author who lives in Venice, says the problems are "homemade." The city has become a "money machine," she says, and is "ruled by those who preach a touristic fundamentalism" and whose belief system, simply put, is "Out with Venetians, in with tourists!" 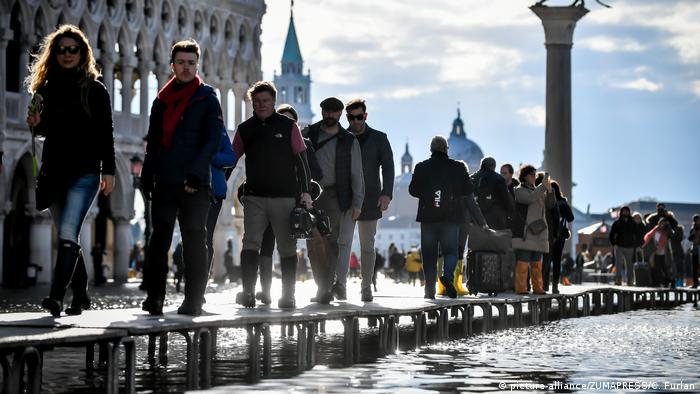 The Italian climate activist Jane da Mosto is also fighting to protect Venice and criticizes the situation where the old city is being "squeezed like a lemon" for the benefit of the rest of the city. The minority that lives on the lagoon islands, the "real" Venetians, have no voice, she says.

Her words echo those of the Romantic German writer Goethe, who wrote of the "real" Venetians and their "wonderful island city, this beaver republic."

Only a minority of Venice's population, some 50,000, live in the historic island center. Roughly four times as many, including Mayor Burgano, live on the surrounding mainland and estuary of Venice, with its most populated borough being Mestre. Together, the mainland and islands form one urban administrative area — and will continue to do so. A referendum last weekend on whether the mainland should split off from Venice saw woefully low turnout that failed to meet the 50% minimum required to validate the vote.

Backers of the split had argued that the island and mainland areas have radically different problems. And, indeed, November's "Acqua Alta," or high water in Italian, only affected a small portion of the city's population. Yet for now, all of Venice will tackle the aftermath of the flooding together as one city.

Venice is in danger of losing its UNESCO World Heritage status after this week's extreme flooding, according to the body's director, Mechtild Rössler. At the same time, she offered the lagoon city immediate aid. (15.11.2019)

The lagoon city is used to the phenomenon known as "acqua alta," but the record-breaking floods put Venice in an emergency situation. Many cultural venues had to close and are tracking the damage caused by the water. (13.11.2019)

How much damage has flooding done to Venice's landmarks?