What do futurists imagine for the post-coronavirus-pandemic world? | Science | In-depth reporting on science and technology | DW | 02.04.2020 Predicting the future is a fool's game, they say. It takes the finest, bravest minds to dare. Even now, when we're seeing massive, rapid change in most walks of life — inspired by a push in science or technology, or nudged by a freak, global health emergency — it's hard to find sound prophecy.

Health ministers, such as Germany's Jens Spahn, say it's impossible to tell "what will happen in the coming weeks." And that's despite his access to mountains of data, including, surely, this study from 2007 that warned of reemerging "SARS-CoV-like" infections.

So how French astrologer and physician Nostradamus, writing his 16th-century poetry, predicted that China would invade Europe with an epidemic around now is an unfathomable mystery.

Not even climate activists would have said back in December, when China first alerted the World Health Organization to SARS-CoV-2, that global consumerism could be crushed by the wheels of its own industry ... quite so suddenly.

And yet that is what's happened.

The COVID-19 pandemic has brought change to society and to daily life that we're hopeful will be a passing moment, a blip in time. Lockdowns, closures, supply chain woes, and other signs of communities SLOWING from a great SPEED.

But perhaps this is the kind of tipping point that we secretly crave — a slowing of society.

Fifty years ago, two of the world's most renowned futurists, Alvin and Heidi Toffler published Future Shock, a seminal book on the increasing speed of life. 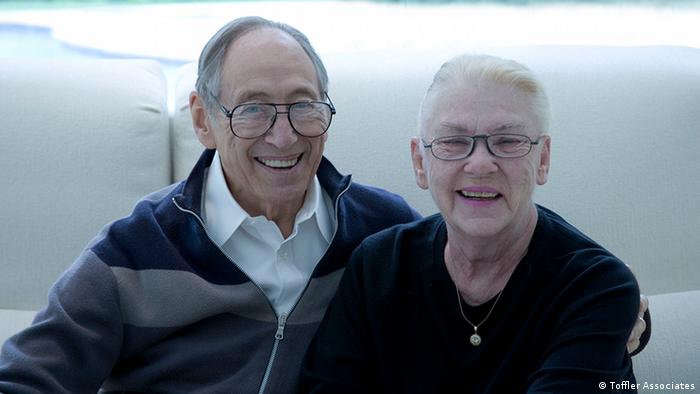 Alvin and Heidi Toffler, two of the world's most renowned futurists, predicted people would struggle to cope with increasing rates of change

The Tofflers suggested that many people would struggle to deal with an increasing rate of change and, as a result, suffer a social or personal shock. Perhaps they weren't quite game enough to predict a viral outbreak, but they sure as anything predicted a pandemic.

"When Alvin and Heidi wrote Future Shock, they didn't consider themselves futurists," says Maria Bothwell, CEO of Toffler Associates, "but it was clear they had struck a chord with a global society dealing with an unprecedented rate of change."

Whether we survive the shock depends on how well we adapt, she says. Mere mitigation will not suffice.

What complicates things is that no two societies are ever fully the same, and the individuals who make them — the "families, tribes, governments, companies" — are as varied as they are many.

"Each of these entities can adapt at different rates and this desynchronization continues to cause friction, leading to that feeling of 'future shock'," says Bothwell.

We're seeing that friction today, between so-called "forces" and "anti-forces." The push and pull of people and places adapting this way or that way. But it's nigh impossible to predict how much of that change, and its effect on daily life, will remain, and how much — or what — will change back.

"We will see a 'new normal' following this crisis," says Bothwell. "It won't be on the massive scale that some predict," she says, explaining that when we're past week three of quarantine and have adjusted to the change, our regular behavior will start to reemerge. "But people should prepare for differences."

A "doomster" on the future

"The grounds for pessimism are that such events may be recurrent, that 'bad actors' will engineer and release more virulent and transmissible variants," says Rees. "That can be done with Influenza and smallpox. Fortunately, this new virus is more complex, but it's probably only a matter of time before it can be hacked as well."

Rees was one of 50 contributors to After Shock, a book of essays commemorating Future Shock's 50th anniversary. His most recent futurist work, 2018's On the Future, has just come out in German. It goes into some detail on pandemics, citing social disruption, with "nowhere to hide" from economic collapse in our networked world. 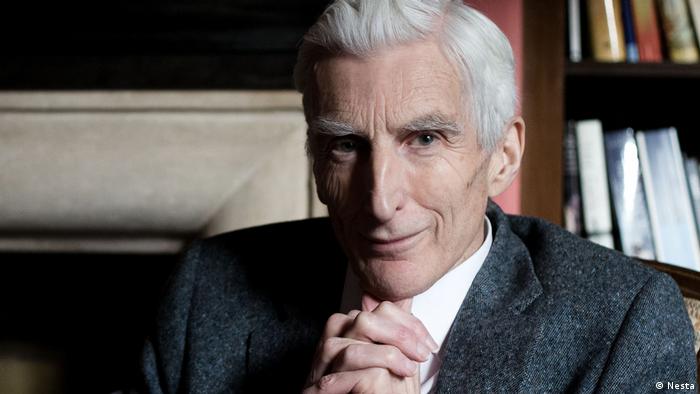 "The optimistic scenario is that this will be a 'one-off' event from which we'll recover, having learnt at least two lessons," he says. "First, we shouldn't depend on non-resilient, long supply chains. We need to invest in spare capacity, in people and equipment, to cope with such events," which, Rees predicts, are unlikely "but not necessarily improbable."

And second, says Rees, we may learn that it's unnecessary for city workers to spend "one or two unpleasant hours" each day commuting between home and the office.

Ah, home office. We should've seen that coming. Replete with its joys of video conferencing, bring-your-own-devices and back pain.

Some organizations may try to "protect" their employees from having to work from home, says Isabella Hermann at the Berlin-Brandenburg Academy of Sciences and Humanities, where she studies the socio-cultural-tech impact of science fiction.

"The underlying mindset is quite interesting," Hermann says, "namely that work is not really part of your life or something you like to do, but something you must do exactly seven hours and 42 minutes a day. And then your real life starts."

But Hermann senses even those organizations will have to embrace new technology.

Read more: Why scientists make rotten forecasters of the future

So, say you've got it sorted and you're finally at ease with the laptop on your lap — what do we do with all that free office space and the low-income workers who clean it?

"I imagine the pandemic will speed up the development of the infrastructure needed to support our online work," says Susan Schneider, director of the AI, Mind and Society Group at The University of Connecticut and NASA-Baruch S. Blumberg/Library of Congress chair holder.

Faster networks are here with 5G. But can tech solve everything? Take video conferencing. It's fine as an exception, but as a rule it fails to fully translate subtle forms of communication — body language below the head and shoulders. All sound is normalized, mics get muted, along with nervous hands or a lost, downward gaze.

We may just do away with such gestures — no need to hold onto everything. Or is there?

"I've been at the Extinction Rebellion actions. I'm putting my body there, not just sitting in a chair doing clicktivism, which can be useful, but I want to be there," says musician and creative technologist, Matt Black. "There are communities online, but my impression is that people are very hungry for 'In Real Life' experiences. The internet might just be facilitating. But it's still about the real world and a reminder that you can't eat anything on your computer screen."

The irony may be that an increasing reliance on digital communication creates a growing need to travel long distances and be there in person. We see the moon on our phones, so why not go there?

"I'm worried that in a post-pandemic world, corporations may make less use of human labor, replacing human workers with automation and AI. Computers and robots don't get sick," she says.

"We must envision a path that allows humans to flourish by asking: how can we protect people financially, should widespread technological unemployment happen even sooner than we anticipated?"

It is happening, even as our daily lives slow and that mantra of "getting things done" goes up in smoke — that other things speed up.

"The coronavirus is accelerating and highlighting what I've called the 'meta issue of our times,'" says David Chaum, a pioneering cryptographer.

Fear of infection is limiting "in-person" interactions, he says, forcing us deeper into an "increasingly chilling use of online systems" and all-electronic communication.

"What's needed is an online system that has the protections of in-person communication, protecting not just what is said but also the 'meta data,' the social graph of who talks to whom and when," says Chaum. "But if the technology we've worked so hard to advance itself dominates us, not only is the whole struggle betrayed but the opportunity is lost."

That raises the question whether privacy isn't just a cultural construct. If your health depended on it, wouldn't you share your data willingly?

"We need to say goodbye to our concepts of data security," says Tobias Gantner, CEO at HealthCare Futurists. "Look at the development of acoustic biomarkers where, from voice snippets, you can detect a predisposition for Parkinson's or depression. Data security is something for healthy people. If you are at risk, the odds change rapidly, you become in favor of sharing or donating data." 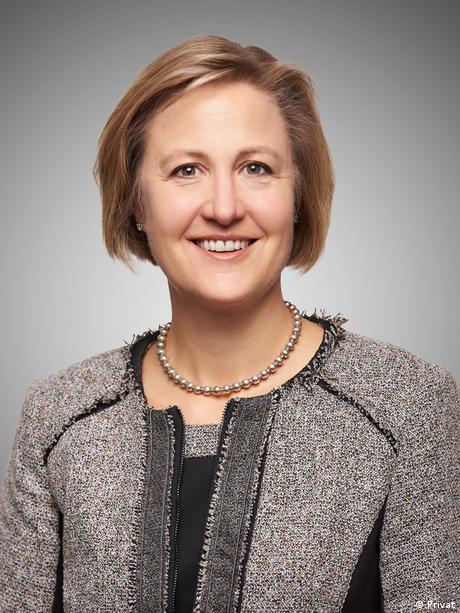 But how we change depends on how we see ourselves as individuals and groups living through the now.

We may well prefer to protect the old ways.

"Our populations have become less deferential, self-centered and self-indulgent," says Ruben Nelson, executive director at Foresight Canada. "Those characteristics are reinforced by a short-term profit-driven corporate world, with the support of a trillion-dollar advertising industry and complicit governments who have fetishized economic growth."

Nelson is keen on change. This time, he says, it will "mark and divide human history."

And we may see an "unexpected" benefit, he says, namely "A realization among some that the dominant ways of knowing and organizing, which characterize our modern techno-industrial cultures, cannot handle the realities of living, complex, relational, human and non-human systems. This may help bring into focus the need to update the conceptual foundations of our cultures."

Rip it all up and start again? It's a big ask. Our shopping habits alone feel unchangeable. But whole cultures?

"I don't think there will be a fundamental change in consumption, such as is the hope among climate activists," says Isabella Hermann. "That would only be possible if the 'system' changes. What we're doing now is keeping it running at any cost."

But then, "nothing is as difficult to predict as the future," she says. "You can analyze all kinds of data and trends and build scenarios, but the future is non-linear."

It's not like the past, where historians — like one-trick pony Yuval Noah Harari — tell it as if it were a chain of causal events. And he does it looking to the future.

So it'll only be when it's all over that we'll have the luxury of telling the story as a neatly bound series of logical events.