′We need to talk about religion and patriarchy′: Bangladeshi activist | Asia | An in-depth look at news from across the continent | DW | 22.10.2019

'We need to talk about religion and patriarchy': Bangladeshi activist 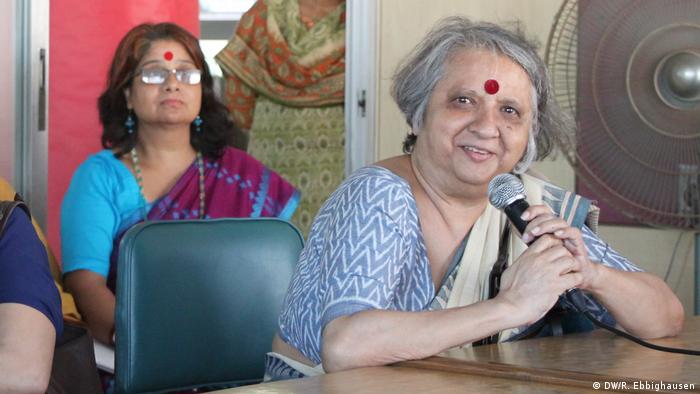 "Naripokkho" is an NGO in Bangladesh focusing on human rights. The organization's office in Dhaka doesn't have any air conditioning. Instead, the windows are wide open and the room buzzes with the sounds of the ceiling fan and the noise coming from the street below. Speaking to DW, activist Khushi Kabir, who is not part of Naripokkho, says that not using the air conditioner is the organization's way of being environment-friendly.

There is no doubt that the women in Naripokkho know how to fight for a cause and that their opinions have prevailed in many confrontations. Kabir, who is currently working in the embattled field of land right issues, is no exception.

She says there are two main, interconnected factors preventing development, particularly the development of women in Bangladesh and in many parts of Asia. The first is patriarchy, as an underlying worldview, and the second is the political system, which is shaped by patriarchy.

The effects of patriarchy

Patriarchy is an ideology that benefits men in almost every regard, according to Kabir, but it is not always easy to gauge its massive effect on society. The reason for that is that people usually don't know alternatives to the way they live. Patriarchy seems to be natural, which of course it isn't.

Another reason why patriarchy is so deeply entrenched in society is its direct link to religion. According to the activist,  "All religions, and I am very clear in stating all religions, are patriarchal in nature -by the very way they are created and the way they are practiced. Religions, especially revealed religions, tend to take their holy books literally, which means there is not much room for adjustment. Discrimination of women, therefore, is the result of centuries-old beliefs, manifested in religious writings and performances which cannot be questioned."

Wahhabism as an alien doctrine

This is especially true for the Islamic doctrine of Wahhabism. This ultra-conservative movement of Islam originated in Saudi Arabia. Kabir explains that historically, Muslims in Bangladesh practiced  Sunni Islam with a strong influence of Sufism. "Historically, Sufism is the antithesis of Wahhabism. Wahhabism was totally alien to our part of the world."

But with all the petrodollars that Saudi-Arabia earned, Wahhabism became more and more influential in South and Southeast Asia. "Workers are going to Saudia-Arabia and they are not only sending money [back home], but hijabs and burqas. A mental change is happening," Kabir explains, adding that 15 years ago, only a few women wore the hijab, but now, it is a common feature on Bangladesh's streets.

For example, a lot of women nowadays say they feel safer wearing a hijab, but investigations show that the hijab does not prevent women from being harassed and even raped. It does not protect women because their bodies are not the reason why they are being sexually harassed. "It is a sick mentality that's being propagated and promoted. It is a mentality where women are sexual objects and it's not their dress or their age or whatever. It is that women are just to be used as sexual objects."

Kabir then addresses men, saying: "If I were you, I would feel most insulted because the hijab is a clear statement that men are not human beings, that they cannot control their lust. So, I would take it as an insult."

Furthermore, what really upsets Kabir is when the government dismisses Naripokkho's ideas as being too modern while condoning conservative viewpoints.

"When we start talking about equality and inheritance, it is too radical. When we say secularism is one of our founding principles and it's in our constitution, we are too radical. When we say you can't make Islam a state religion it's a contradiction to our constitution, we are too radical," Kabir says, arguing that most speeches by Islamic preachers are discriminatory to women, but the government does not take any steps to regulate them.

Kabir says most people are afraid to talk about religion "They say religion is very sensitive, you will be beaten up, you will be killed." But the only way to improve and to overcome the hurdles which prevent development is to start talking about religion and patriarchy.

"Those of us who want to work for change must start breaking that barrier that we have within ourselves and learn to be open."

It is also important to reach out to the youth because they are more flexible, the activist feels, and she is confident that it is possible to start a discussion and ask questions even in the most conservative rural areas. "I think it's important that people learn to find answers themselves. I'm not saying that everybody should not have a religion. It's up to the individual who decides whether they want or not. But there should not be blind followers," she concludes.

This interview was published following a research trip organized by the United Nations Association of Germany to Bangladesh.