Von der Leyen: 'We want to take on more responsibility'

German Defense Minister Ursula von der Leyen received a warm welcome on her inaugural visit to the United States. She tells DW she discussed serious questions, including the course of action in Iraq. 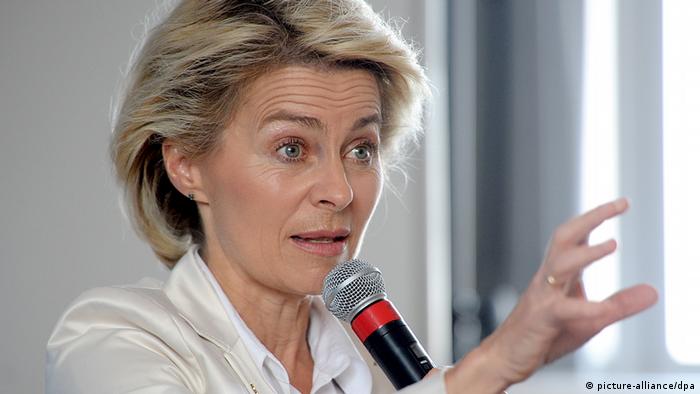 DW: Did your American counterpart, US Secretary of Defense Chuck Hagel, ask for German support in Iraq?

Ursula von der Leyen: We talked about the situation in Iraq and we both agree that three questions need to be tackled: First, how to stop ISIS. That is the urgent question. Second, how to get [Iraqi Prime Minister Nouri] al-Maliki to form a government that includes all groups. Thirdly, how to convince the neighboring countries to end this fight and develop a solid and sustainable solution.

What do you think about the plan President Obama presented on Thursday?

It shows that the United States is looking at the details in its search to determine a coherent solution. They are not up for a "quick fix" but for something that will bring permanent stability. All the surrounding countries should actually be interested in slowing the progress of ISIS - the Turks when it comes to the Kurdish issue, Iran as a supporter of Shiites as well as Saudi Arabia, which supports the Sunnis.

Could you even have said "yes" if Chuck Hagel had asked you for help? 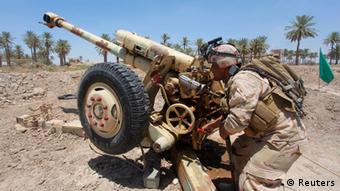 The question has not been asked. But it is clear that we want to take on more responsibility - but only under certain conditions. First, we need the approval of the United Nations. There will never be a unilateral approach, it will always be multilateral. Second, it is important to me that we always consider the broad range options at our disposal: diplomacy, economic developments and, only as a last resort, the question of a military deployment.

UN peacekeeping missions have shown that it is sometimes impossible to abstain from military force, for example when a genocide is about to happen. But we do know just as well that there is no security without economic development and political conciliation - and vice versa: There is no economic development without security.

In Iraq, a bilateral approach with the Americans would not be possible?

It was not possible in the past and will not happen in the future. History asks of us that we never act unilaterally, never alone, but only within the alliances of NATO, the United Nations and the European Union as it is clearly specified in international law.

In the US, there is a certain resentment to Germany's failure to spend 2 percent of its GDP on defense as agreed. The Americans say Europe, and especially Germany, should take its security in its own hands.

We are called upon not only as Germans but as Europeans to bear our load of the burden, no question about that. It is our responsibility to the Americans. But if we are talking about the 2 percent goal the question is: 2 percent of what? Two percent of GDP is supposed to be allocated for military spending. Some countries in Europe that have just emerged from the financial crisis accomplished that. But how did they do it? They reduced their military budget but at the same time the GDP had shrunk even more. That cannot be a healthy way to do it.

Germany is the second-biggest net contributor to NATO. Our military budget is steady with a slight increase over the next few years, and our GDP is growing. Consequently, these 2 percent are not the only question. We also talked about what we would like to use the money for. Which capabilities would we like to develop together? Germany is dedicated to precisely this question because it is about guaranteeing our future and that of NATO.

Could you imagine Germany leading a UN peacekeeping mission in Africa. for example? 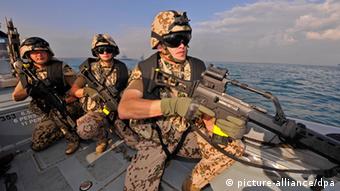 As part of a EU mission, German soldiers are combatting pirates at the Horn of Africa

Currently we are involved in six such missions in Africa. Some of them are training missions, but there is also the fight against pirates off the Horn of Africa. And, yes, we would like to comply with NATO's request and take on more positions of responsibility, this includes leading a peacekeeping mission in Africa.

Will NATO have to reconsider its strategy since Russia has re-emerged as a new threat? Just this past Thursday, there have been reports about new troop movements along the Ukrainian border with Russia.

The main strengths of NATO are its high ability to adapt and its flexibility. That does not mean we should resort to Cold War strategies and permanent deployment again. That time is over. Instead one has to implement the concepts we pushed ahead in a flexible, multinational way. I would like to remind you of the air-policing in the Baltic states or the fact that we strengthened our maritime organizations.

Do you believe that Russian President Vladimir Putin took advantage of a chance situation to annex Crimea or do you believe the move is part of a bigger Russian strategy?

I know it is a part of a strategy that has been planned for a long time. Putin himself has said he thinks that those countries situated in the zone between Russia and the European Union should not be allowed to turn towards the EU.

I think those countries can decide what they want for themselves. And there is a reason why they turn towards the West and that is because the protection of human rights and freedom of the press are appealing values. That is the basic conflict we argue about: Whether it is his right - which I deny - to harm a state's territorial integrity just because said state decides to open up towards the West. Should we allow that? I say we should not.

But the West seems to have given up when it comes to Crimea.

The West has not given up on Crimea. I believe that Putin has underestimated two things: His activities have led to a great unity among Western forces; he did not expect that. And, secondly, that we reply in a different manner than he does. We do not intervene asymmetrically using paramilitary forces. We reply using economic sanctions. And because we know that this is Russia's Achilles heel it is working.

Opinion: Still not enough for Washington

Germany wants to take on more responsibility, Defense Minister von der Leyen stated during her visit to the US. But that does not make Germany a military force to be reckoned with, writes DW’s Max Hofmann. (20.06.2014)