US president prepared for 'targeted' military strikes in Iraq

US President Barack Obama has said that he's prepared to launch "targeted" strikes against Islamist militants in Iraq. He has dispatched 300 military advisors to assess Baghdad's security needs. 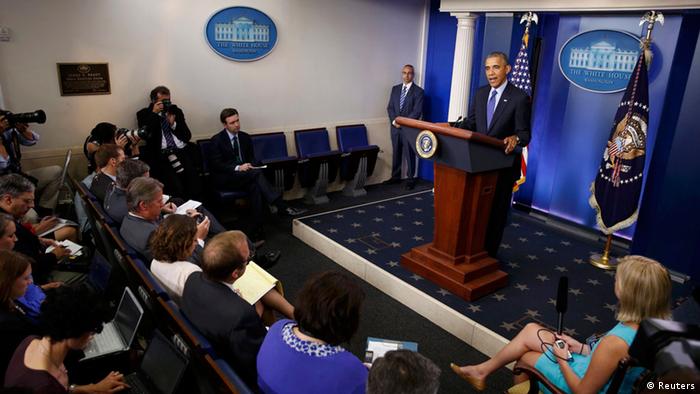 President Obama emphasized on Thursday that he would not send US troops to engage in combat operations in Iraq.

"We do not have the ability to solve this problem simply by sending in tens of thousands troops and committing the kinds of blood and treasure that has already been expended in Iraq," Obama told a news conference.

But the president went on to say that the US has a national security interest in ensuring that Iraq does not descend into all-out civil war. He cited the security of US allies in the region and the stability of global energy markets as grounds for limited military intervention.

Militants associated with the Islamic State in Iraq and Syria (ISIS) continue to battle with government troops for control of the country's largest oil refinery at Baiji, located 200 kilometers (130 miles) north of Baghdad.

"We will be prepared to take targeted and precise military action if and when we determine the situation on the ground requires it," President Obama said.

The White House plans to deploy 300 military advisors to Iraq. They will assess the Iraqi military's needs and capabilities as well as gather intelligence, according to Obama. The advisory mission comes in addition to the 275 US troops being deployed to protect the American embassy in Baghad.

Iraq's Shiite-led government has formally asked the US to launch airstrikes against the Sunni militants associated with ISIS, which has rapidly seized large swaths of the country. But Obama said that Washington will not support one sect over another in Iraq.

"There's no military solution inside of Iraq, certainly not one that is led by the United States," the president said."But there is an urgent need for an inclusive political process, a more capable Iraqi security force and counterterrorism efforts that deny groups like [ISIS] a safe haven."

The president said he would also dispatch US Secretary of State John Kerry to the region to launch a diplomatic offensive aimed at stabilizing Iraq.

For the past week, US and Iranian officials have hinted that they could work together in some fashion to stop the advance of ISIS in Iraq. The government of Iraqi Prime Minister Nouri al-Maliki is allied with both Washington and Tehran, who have been bitter enemies for more than three decades.

"Our view is that Iran can play a constructive role if it is helping to send the same message to the Iraqi government that we're sending," Obama told reporters, saying that Iraq must rise above sectarianism and become an inclusive nation.

"If Iran is coming in solely as an armed force on behalf of the Shia, and if it is framed in that fashion, then that probably worsens the situation," he said.

US President Joe Biden signs series of orders, including rejoining Paris climate accord 15m ago

German Chancellery: 'Very, very good sign' that Biden will rejoin WHO 29m ago

Opinion: Joe Biden is the right US president for the moment 45m ago