Americans want no part of new Iraq war | World| Breaking news and perspectives from around the globe | DW | 19.06.2014

US President Barack Obama this week announced plans to send nearly 600 US troops to Iraq as part of a limited military action. The move comes at a time when more Americans than ever are against foreign troop deployments. 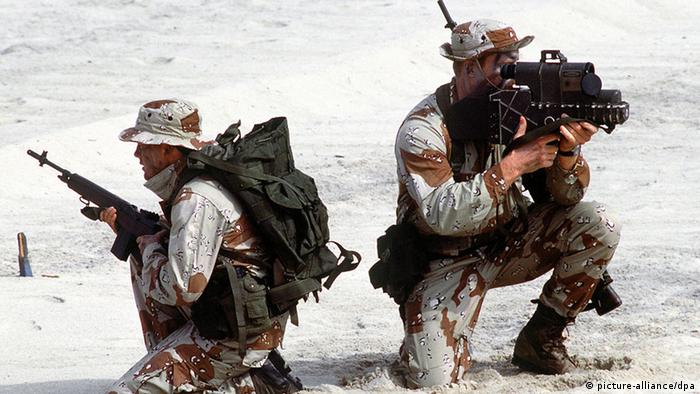 When US army officer Pierre Hines left Iraq five years ago he figured the country would soon be free. When he turns on the television now he says it's easy to see he was wrong.

"It is extremely disturbing," the veteran said of the pictures he has seen coming out the captured cities in northern Iraq. "I can't believe how fast this is happening on a day-to-day basis."

Sitting on a bench at Tecumseh Square in Washington, DC - just a few blocks from the White House - the 28-year-old is currently doing an internship at a law firm in addition to his studies at Georgetown University. He had thought he'd put his life as a soldier behind him in 2012 when he left the military, but his memories of Iraq resurface when he reads the news of the advance of the Islamic State of Iraq and Syria (ISIS). 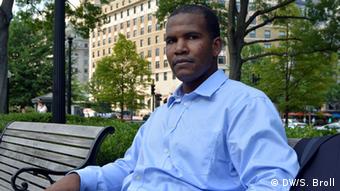 Hines said the situation in Iraq is extremely disturbing

Hines was stationed in Mosul, Iraq's second-largest city, which is now under ISIS' control. As an intelligence officer, he spent one year at Camp Marez at Mosul airport from where he led operations and was in contact with local translators. Those are the people he said he is most concerned about. If he were still a soldier he would not hesitate to return to Mosul if ordered to do so. "As a civilian, and a former solider, I am very concerned about mission creep," he said.

That's a fear US President Barack Obama said no one in the military needs to have. On Thursday, he announced that the United States would send up to 300 military observers to Iraq in an effort to advise Iraqi military leaders in holding off the ISIS advance. Emphasizing that it was important to guard against mission creep, Obama said US troops would not be fighting on Iraqi soil again.

"We do not have the ability to simply solve this problem by sending in tens of thousands of troops and committing the kinds of blood and treasure that has already been expended in Iraq," Obama told reporters. "Ultimately, this is something that is going to have to be solved by Iraqis."

But Hines doubts that any US troops sent to Iraq will have a limited mission there. When the United States marched into Iraq in 2003 it was also with a so-called "narrow mission." Then-President George W. Bush's plan called for removing dictator Saddam Hussein and recovering what the US administration said were weapons of mass destruction being developed in the country. Hines was in high school when the invasion started, and when he joined the army four years later US forces were still in Iraq. He said he thinks the new mission could see US forces stationed in Iraq for years.

Tarsha, spending an afternoon enjoying the sun in Tecumseh Square, agreed. The 41-year-old requested anonymity because her husband is in the army. "He has been in Iraq twice and each time I was very afraid." She said she was reassured last week when Obama said no ground troops would be stationed in Iraq, but then the US president said 275 soldiers would travel to Baghdad to protect the US embassy. Those come in addition to the up to 300 military advisors Obama said on Thursday would be deployed to the country. 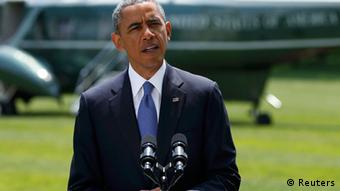 For some Americans, including Jonathan Copeland, the president's announcements this week amount to a broken promise. "Clearly, there is some bad stuff going on over there, but I don't know if going to war and using arms is the way to solve it," the 39-year-old said.

Some 52 percent of Americans said it was more important for their country to take care of its own problems, according to a December 2013 poll by the Pew Research Center. Only 38 percent of those surveyed supported getting involved in conflicts in other countries. That's the lowest percentage measured since polling on the issue started in 1964.

Kathy Lush is among the Americans who changed their opinions after the 2003 Iraq war. Lush believed then-Secretary of State Colin Powell when he said Saddam Hussein possessed weapons of mass destruction.

"I was one of the people who thought there were weapons of mass destruction so I thought we had to do it," she said. "Now I just don't know. We've already been involved and I feel like there are no answers to anything from our government. I'm exhausted, it's chaos. It's horrible."

Airstrikes, ideally conducted by unmanned drones, could be an alternative to the return of a major US military presence in Iraq. On Wednesday, the Iraqi government requested the United States' air support. During his time in the military, Hines worked with drones for surveillance in the area around Mosul and said they would be difficult to use in such areas.

"The police stations that apparently the insurgents in Mosul are holding, the base I was on at the airport, all of that is inside the city," he said. "It's not the middle of nowhere. You'd literally be across the street from a civilian's house. It appears a lot of civilians have fled, but when you're that close to the civilian population we have to make sure we don't do more harm than good."

Obama's foreign policy is not about demonstrating strength or maintaining the USA's stance as a superpower. It's about trying to escape the black-and-white views of the past, says DW's Max Hofmann. (20.06.2014)