Players and alliances in Iraq | World| Breaking news and perspectives from around the globe | DW | 19.06.2014

As various groups fight each other and the government in Iraq, DW looks at who they are and what they're hoping to achieve. 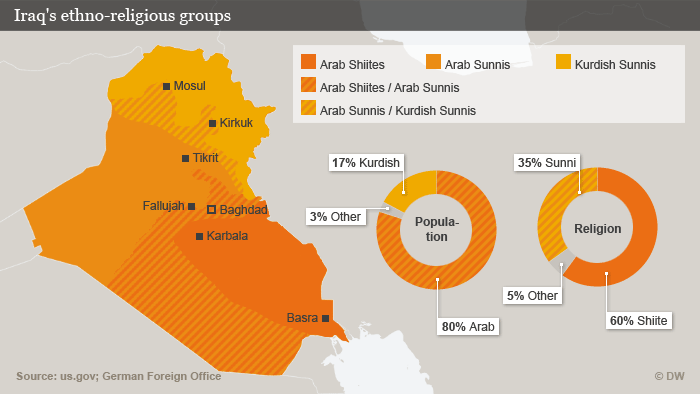 The radical Islamists' group emerged from the Abu Bakr al-Baghdadi-led group "al Qaeda in Iraq" which fought the United States' invasion in Iraq. In addition to that, it also has been fighting the country's Shiites for years.

In 2012, Al-Baghdadi got involved in neighboring Syria's civil war and helped build Islamist Nusra Front. But in 2013, ISIS and Nusra Front had a falling out despite the fact that both groups belonged to terror network al Qaeda. While the Nusra Front continues fighting in the name of al Qaeda in Syria, ISIS is operating on its own in Syria and Iraq.

ISIS is mostly financed through funds from the Gulf States Qatar and Saudi Arabia. Within Iraq, it profits from the conflict between the Shiite-led government under Prime Minister Nouri al-Maliki and the Sunni parties in the country.

More than a third of the Iraqi population are Arab Sunnis. They mostly live in the country's north and west. Until the toppling of former dictator Saddam Hussein in 2003, the Sunni minority ruled the country. Shiites and Kurds were violently oppressed.

After the end of the Iraq war, elections were held, but there was no reconciliation between the different population and religious groups. Shiite Prime Minister Maliki has taken an increasingly authoritative stance and has been accused of excluding Sunnis from positions of power. That's why ISIS fighters are supported by different Sunni tribes and guerilla fighters - for instance by Jaish Mohammed, Ansar al-Sunna and the Army of the Men of the Nagshbandi Order, which is the military arm of the now-outlawed Baath party, which ruled much of Iraq under Saddam Hussein.

Arab Shiites, about 60 percent of the population, make up the largest religious group in Iraq. They mostly live nearby the country's center, close to their holy cities Najaf and Karbala south of Iraq's capital, Baghdad.

After the end of the war, Maliki was the declared winner of democratic elections. He is supported by a Shiite alliance which sparked tensions between Shiites and Sunnis and led to another power struggle. The Sunni terror group ISIS regards Shiites as "infidels" who deviate from the true belief of Islam and thus fights them in Iraq. The most important Shiite militia are Kataib Hezbollah, and Muqtada al-Sadr's militia, the Imam al-Mahdi Army.

At the moment, each of the militias has about 2,500 to 3,000 heavily armed fighters at their disposal. In addition to these fighters, they have tens of thousands of volunteers with little combat experience. The highly regarded Shiite Grand Ayatollah Ali al-Sistani has issued a call to arms for Shiites to defend their sacred sites.

About 17 percent of the Iraqi population are members of this ethnic group. The majority of Kurds belongs to Sunni Islam - they live mostly in the autonomous region in northern Iraq. They try to stay away from the recent conflict between the Sunni ISIS fighters and the Shiites under Maliki.

They have their own Peshmerga force made up by more than 100,000 fighters. Some of the fighters moved into Kirkuk after the start of the ISIS offensive. That's how the Kurds managed to become the new leaders in city overnight. Prime Minister Maliki never integrated the Peshmerga into the Iraqi forces. In turn, he now can't demand their help in the fight against ISIS. The Kurds are a reliable partner for the United States, Europe and Israel in the current crisis and could emerge as the winner of this conflict. 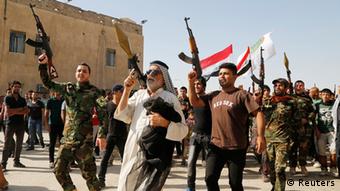 Volunteers have also taken up arms to fight ISIS

The army, which has been relatively well-equipped with modern technology, is comprised of 14 divisions with 270,000 troops. The soldiers have been trained for years by the United States.

Four divisions of the army have completely collapsed when faced with fighting ISIS militants. These units had a disproportionally high number of Sunnis and Kurds who didn't have any interest in risking their lives for the Shiite-led government.

The troops in Iraq's north have little interest in defending the mostly Sunni cities like Mosul and Tikrit. Tensions between Sunnis and Shiites divide troops, but corruption is also partially responsible for low morale.

Iran regards itself as the regional protecting power of Shiites. That's why Tehran supports the Iraqi government in its fight against Sunni ISIS. Iran's President Hassan Rouhani has said Iran wouldn't hesitate to defend sacred sites in Iraq. Western diplomats are acting on the assumption that members of Iran's Revolutionary Guard are already present in Iraq.

Iran's regional opponent, Sunni Saudi Arabia, has warned of international meddling in the conflict. Saudi Arabia - just like other Gulf States - fears a strong Shiite axis from Iraq to Iran and Syria to Lebanese Hezbollah.

The United States supports the Maliki government. After the US withdrew its troops from Iraq in 2011, Washington has supplied arms to Iraq's army. In addition to warships, US President Barack Obama has decided to send up to 275 American soldiers to the crisis region. The concern that militant Islamists could further take root in Iraq has led to serious talks between the United States and Iran.