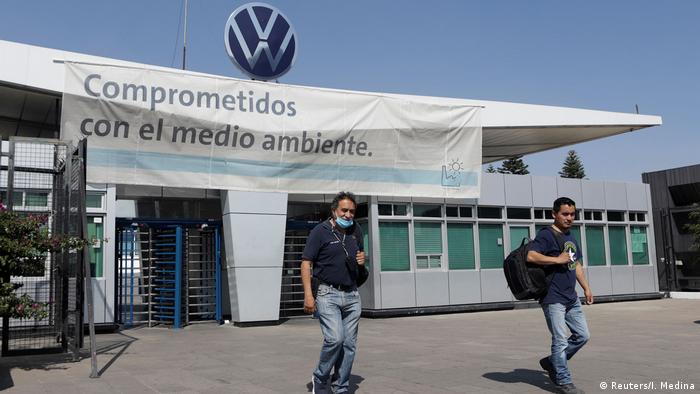 German carmaker Volkswagen and its subsidiary Audi won't be able to restart production at their plants in the Mexican state of Puebla as planned on Monday due to fears about the coronavirus spreading.

Puebla Governor Miguel Barbosa signed a decree on Friday stating that conditions for reopening the automotive and construction sectors were not yet favorable, according to a post on the state's Twitter account.

He said that while he was keen to restart the local economy as soon as possible, he would not do so at the expense of public safety.

VW and Audi shut down their plants in late March as a result of the pandemic, and for weeks have been waiting for the all-clear from authorities to reopen. The Mexican government had initially set a target of May 18, then pushed it back.

Read more: Mexico chooses its own path to stem economic fallout of pandemic

On June 1, carmaking was classified as an essential sector, and most plants across the country have since resumed operations under strict safety measures. But Barbosa's decree means carmakers in Puebla can't follow suit.

VW had previously said it planned to get its factories in Puebla and the central state of Guanajuato up and running on June 15.

Mexico is the world's sixth-largest producer and fourth-largest exporter of cars. The halt in production has taken a toll on the industry and caused major problems for supply chains. For example, VW's Mexican factories produce parts that its US plant in Chattanooga relies on to keep operations running.

According to VW's Mexico website, its plant at Puebla southeast of Mexico City is the largest automobile production facility in the country. Last year, some 443,435 cars were made there. Around 330,000 engines were produced at its plant in Silao, Guanajuato.

The auto industry represents 3.8% of Mexico's GDP and provides jobs to nearly a million Mexicans, according to Reuters. The Mexican newspaper La Razon reported that restarting production at the Audi and VW facilities in Puebla would see some 30,000 employees returning to work.

Mexico has reported almost 134,000 confirmed COVID-19 cases and 15,944 deaths, although the real numbers are expected to be much higher. Puebla has registered just under 5,000 cases.

Germany's carmakers have demanded a sales rebate on new diesel and petrol cars. The powerful lobby has been backed up in its calls by state premiers and industry groups. (31.05.2020)

A practice employed by German automaker Volkswagen (VW) to protect its new vehicles from hailstorms has led to a dispute with local farmers in Mexico, who claim their crops are being damaged. (22.08.2018)

The Polish automotive sector has been the worst-hit domestic sector in the coronavirus pandemic. Given that exports drive manufacturing, it's hardly surprising. (28.05.2020)

Mexican Volkswagen staff have bid farewell to their last "New Beetle," the design that in 1997 succeeded the curvy small family car first made famous in postwar Germany. (11.07.2019)