While some are fleeing the erupting volcano on the small Spanish Canary Island of La Palma, others are flying there precisely because of it. Stefanie Claudia Müller reports on an island torn between hardship and tourism. 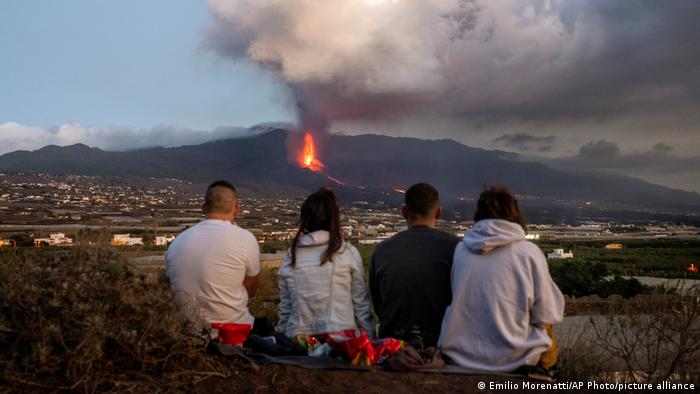 As soon as the plane from Madrid lands in Santa Cruz de La Palma — the largest city on the Spanish Canary island of La Palma — passengers eagerly grip their cellphone cameras, hoping to capture images of smoke and lava. On this particular October day, the pilot has disappointing news.

"Today the wind is coming from the other direction," he tells the passengers.

La Palma, a popular tourism destination, has been the site of devastating volcanic eruptions which began in September. A few days ago, ash was still raining down on the island, causing the airport to partially close. Anyone interested in visiting the volcano was required to wear protective goggles and headgear to prevent eye damage. On some days it was even necessary to wear gas masks. 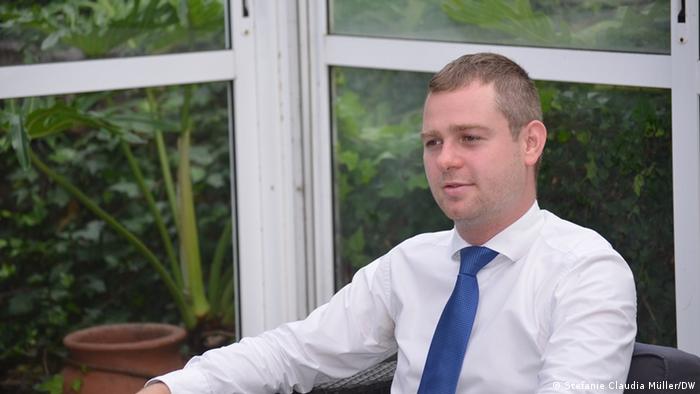 Such apocalyptic images are damaging to La Palma, which relies heavily on tourism revenue. The lush green volcanic island, roughly the size of the city of Hamburg, is desperately trying to salvage the winter tourism season, typically dominated by wealthy German tourists.

But all the cleaning and sweeping don't seem to help; at the Aparthotel Hacienda San Jorge near the capital, Santa Cruz, black ash sticks to the feet of the few guests at the pool. A thick layer of ash also covers the streets.

"First the pandemic, now this," hotel director Karim Gaggstatter despairingly tells DW. He fears a wave of bankruptcies among already indebted smaller hotels and restaurants — even if Santa Cruz is currently on the safe side. The Spanish tourists who fill the hotel on the weekends help boost revenue.

A new wave of volcano tourism

Getting so much attention from the media is new for the small island, but volcanic eruptions are not. There have been three in the last 70 years: in 1949, 1971 and now. Such information is shared with participants in the new volcano tours taking place in the south of the island. These tours have sprung up since the eruptions this September. Isla Bonita Tours and Getholiday were the first companies to offer them. Now, other tour operators are following suit. In fact, so many tourists are interested in visiting the area of volcanic activity, known as the "Cumbre Vieja," that tour operators are even helping one another. 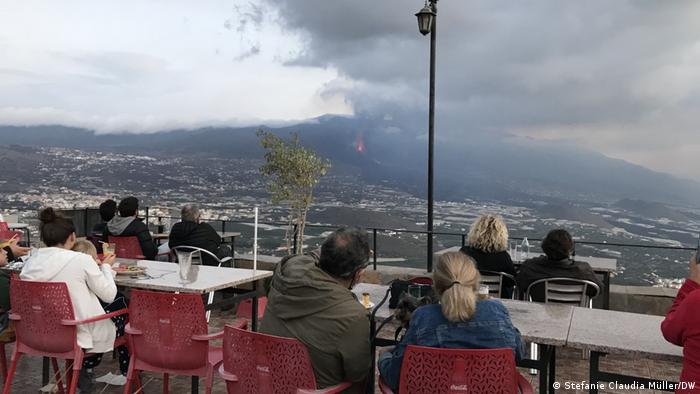 Tours take place during both night and day. Without daylight, the spectacle is undeniably more impressive — the mood on the tour bus is almost reverent in the face of the fiery, boiling force of nature. Near the populous town of Los Llanos de Aridane, one can see couples standing together, embracing and staring into the sky. Some have even brought bottles of wine. It feels a bit like New Year's eve — with the addition of tremors and lava.

Victims and onlookers side by side 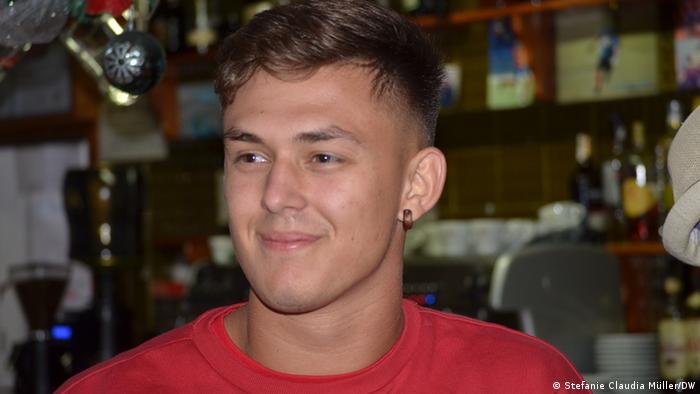 In the span of just a few short weeks, everything has changed on La Palma. "In the past, tourists came to the island for at least a week because they wanted to hike. Now they sometimes book for just three days to see only the volcano," tour guide Romeo Weber tells DW.

He offers six-hour night excursions in a small black Mercedes bus and says he's happy to be working again. He doesn't think much about whether such tourism is ethical. At times, the victims of this crisis stand right next to the onlookers. Some vocally lament lost belongings, others keep watch during the night to make sure the house they've evacuated is not robbed. 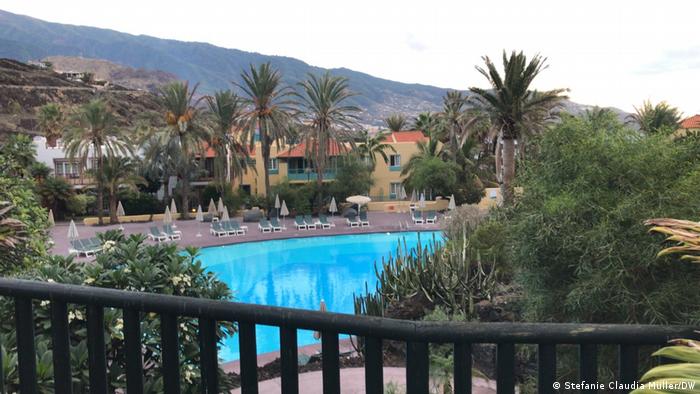 Pool tourists are currently staying away. The pool loungers and the pool remain empty.

"The new tourism is thought-provoking, but it does not divide the island's 80,000 inhabitants, since in the long term it will bring international researchers to La Palma and perhaps other scientific centers," Gaggstatter believes.

Here, climate change and its influence on nature can be closely observed. The island is unique in terms of its volcanic activity and the fact that it is divided North to South by a mountain range that reaches 2,426 meters (7,949 feet), splitting the island into two distinct climate zones. It is also home to Europe's most important astronomical observatory, the Roque de los Muchachos Observatory, named after the island's highest point.

The Hawaii of Europe?

The clear starry sky of La Palma ensures that the view of the hissing red volcano from a church in the small town of Tajuya is particularly impressive on the evening DW visited. No one can get too close to the fiery pit — the safety of every tourist is a priority for the island's government. During Weber's evening tour, there is a heavy police presence ensuring that no unauthorized person enters the security zone put in place around the crater. 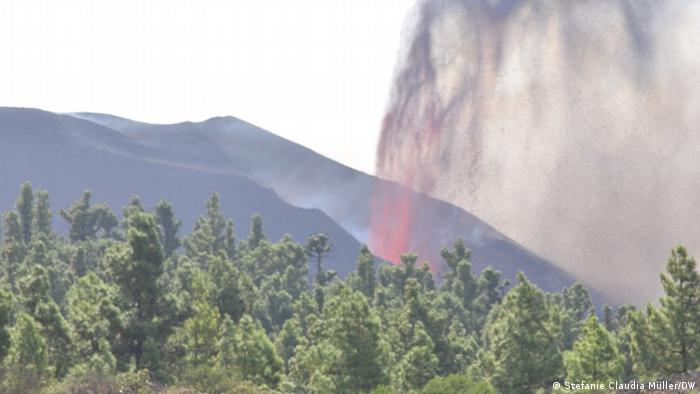 At the same time, the police must protect the roughly 8,000 evacuated houses and buildingsfrom looters. Drones have been circling over the volcano for weeks, providing Spanish security and information services with vital information about whether further evacuations are needed. Around 2,000 private homes and businesses have been reduced to rubble thus far.

"Therefore we do not yet openly advertise the tours," explains Gaggstatter.

In the long term, the 31-year-old German believes that La Palma will make money from volcano tourism in the way that Hawaii has done. "A trip to Hawaii costs around €4,000, La Palma is much cheaper as a volcano destination" he points out.

Success in the face of adversity

Jonas Perez, head of Isla Bonita Tours, also hopes to see a new dawn in volcano tourism. His phone hasn't stopped ringing since several media outlets reported on his tours. Now, the multilingual islander is busy creating individualized tours, even though he and his family recently had to evacuate their home at the foot of the volcano in Puerto Naos. 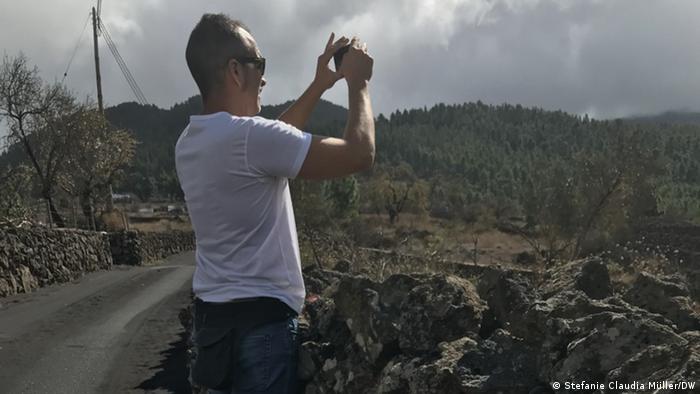 Jonas Pérez, head of Isla Bonita Tours, becomes a tourist himself for a short time during the volcanic eruption

He is pleased with the rapid success of his tours, despite his emergency situation. Tourists now come from all over the world to go on his tours. One of his clients, Galicia-based writer Javier Sanz, even brought a pair of high-end binoculars for the tour.

"I've gone up alone a few times, but it's an even more incredible experience in a group," he tells DW.

Hotel director Gaggstätter hasn't done a tour yet, but has privately driven up to the volcano at night and was impressed: "No one knows how long it will be active, so we have to make our peace with it and think about how we can live with it."

Travelers looking for culture and nightlife have returned to Madrid, one of Europe's most visited cities. But the economic impact of the pandemic has some locals questioning the country's dependence on tourism revenue.

Can turnstiles save the Venice from sinking?

The Cumbre Vieja volcano is not quietening down. Experts expect further violent eruptions. Lava and ash have destroyed houses and plantations, but in the long term, they will also promote new life.

Residents of La Palma are facing a double challenge. In the fall of 2021, a major volcanic eruption devastated the Canary Island. Residents are still dealing with the consequences now – in addition to the aftermath of the pandemic.

Spanish Prime Minister Pedro Sanchez has described the end of the eruption on the tiny Canary island as the "best Christmas present." The volcano flared for more than 85 days, causing nearly €1 billion in damage.