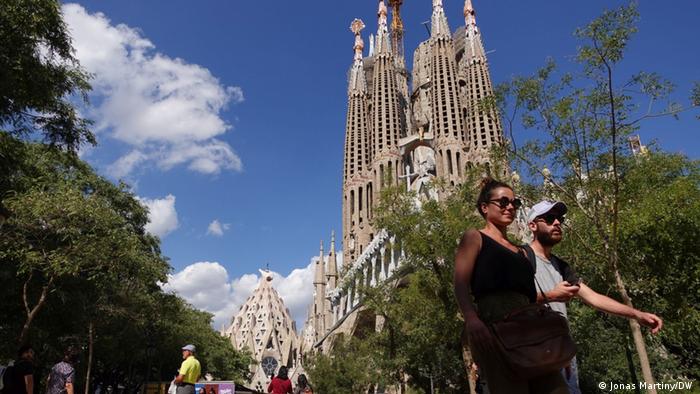 Famous sites in Barcelona, such as the Sagrada Familia basilica, have had unusually few visitors because of COVID

Typically, there are so many tourists at the Sagrada Familia that it's nearly impossible to take a photo without someone stepping into your frame. On this particular autumn day, however, there are few tourists in front of the famous basilica with its facade designed by architect Antoni Gaudi. In fact, there are even same-day tickets available. "Normally, this never happens," says the man at the ticket office, who is visibly bored.

With nearly 5 million visitors annually, the Sagrada Família was the most popular attraction in Barcelona before the coronavirus pandemic hit. It was also the symbol of the city's mass tourism boom. 2019 saw a record number of 14 million vacationers visit the city — more than ever before.

Between 2010 and 2019, the number of passengers going through the airport went from just under 30 million to 53 million. But during this time, much of the local population became resentful of the rapid rise of tourism, resulting in regular protests. 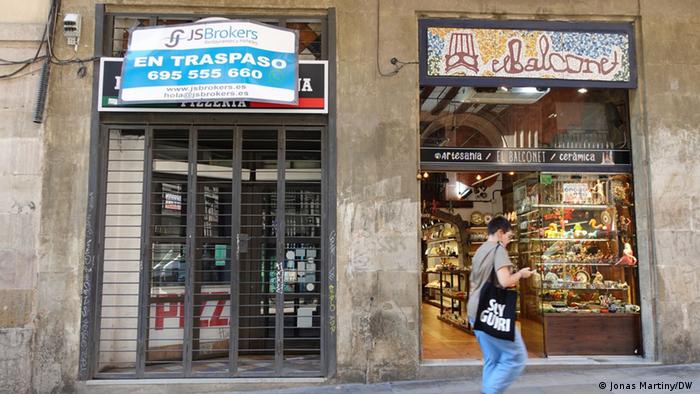 Now, however, the situation has changed: The souvenir store opposite the Sagrada Familia is having a clearance sale. "Everything for €5," reads a sign on the door. One street over, Jose Lorenzo runs a small restaurant that has been in business for 20 years.

It's lunchtime, and prior to the pandemic, all tables would have been occupied by this point. Now, however, there's only one person slowly sipping a beer at the bar. Lorenzo says the more tourism there is, the better it is for the economy.

"It’s a positive thing when people come — it means they like it here," he says.

Unusual tranquility in the Gothic Quarter

An unwonted calm has also descended upon the old town. Before the pandemic, masses of vacationers would stroll through the Gothic Quarter on any given day of the week. Now, it's even possible to stroll on your own through one of the narrow streets and hear the echo of your own footsteps.

The consequences of months without tourists are painfully obvious across Barcelona: A number of stores have even gone out of business on one of the city's most important tourist streets.

"The situation is critical after so many months without real [tourism] activity," Manel Casals, director general of the Barcelona Hotel Association, told DW, adding that 40% of hotels remain closed. Normally, an average of 60,000 people stay in the city's hotels each day during the summer, but this year, there were only 13,000, he said. The industry has suffered losses of €2.7 billion ($3.1 billion) since the start of the pandemic.

"We need to get back to pre-pandemic tourist numbers as soon as possible," Casals says.

"The debate about mass tourism in Barcelona is exaggerated," says tourism director Xavier Marce defiantly. "We don't have a problem with the number of vacationers, but with how they are distributed in the city."

In Barcelona, he says, the tourist sites are located primarily in a very small area. This leads to conflicts with residents and undesirable developments, such as the disappearance of traditional retail, he says. In the historic center, there are now entire neighborhoods with only souvenir stores, restaurants and hotels.

"What we need is the decentralization of tourism," says Marce. 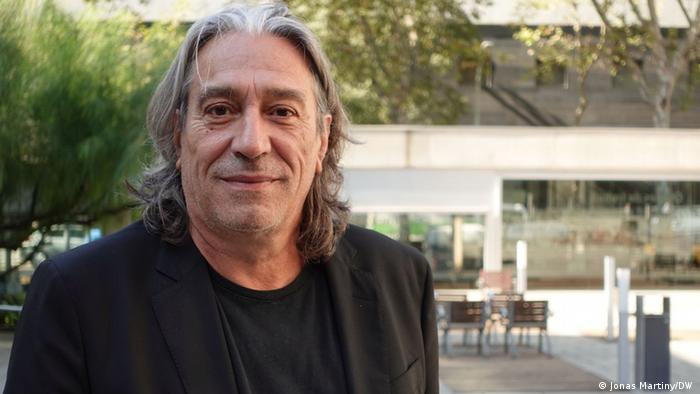 The tourism department has launched several projects to this end. For example, vacationers can now use the Check Barcelona app to see how crowded the most important sites are at any given moment. If the lines in front of the Sagrada Família are particularly long, visitors can simply opt to go elsewhere.

The sightseeing bus, on the other hand, which previously only covered the typical attractions, now also travels through districts that are almost completely off the beaten track for tourists — like the former industrial district of Poblenou, which has transformed into a hip, artistic neighborhood over the past several years.

Activists lose support, but fight against tourism not over

Pere Marine, one of the city's harshest critics of mass tourism, has lived in this district for many years. Marine belongs to the city's powerful residents' association and has organized a number of protests.

The pandemic, however, has somewhat taken the wind out of the activists' sails. They've had to cancel a planned protest in Parc Guell for lack of participants. Many suddenly became painfully aware of how dependent they were on tourism as a business, which accounts for about 13% of the city's GDP.

"Everyone knows at least someone who is employed in tourism and has had a hard time," Marine says. 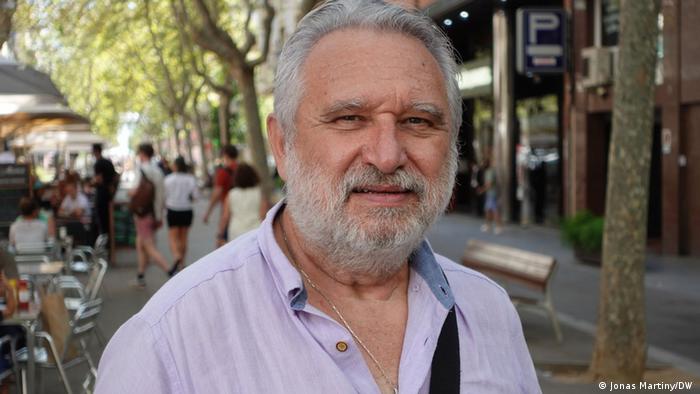 Pere Marine continues to fight against mass tourism in Barcelona

All the same, for Marine the fight is far from over. In his opinion, the tolerable threshold was crossed in that record year of 2019. He doesn't believe the problem will be resolved by simply redirecting the flow of tourists. "Why do the tourists come here? They want to see the Camp Nou, the Parc Guell, the Sagrada Familia," he says.

He feels there is no way around reducing the number of beds in hotels and other accommodation. "We want hotels to be converted into social housing," he says. This would mean not only fewer places for tourists to stay, but it would also go toward resolving the lack of affordable housing in Barcelona. 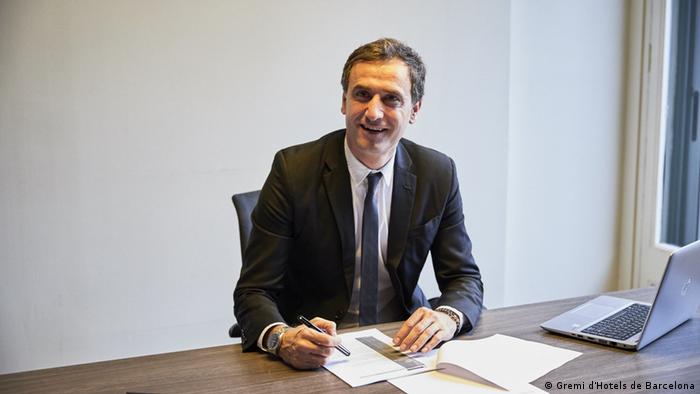 No plans to reduce the number of beds

But this is unlikely to happen: Although the city has strictly regulated the approval of new tourist lodgings, there are currently no plans to reduce bed capacity. On the contrary: Further growth is possible in districts outside the inner-city area. Tourism department head Marce puts it bluntly: "It's not our goal to reduce the number of tourists."

However, he says efforts are being made to upgrade hotels, something that will lead to higher prices. "The number of tourists then automatically decreases," he tells DW.

Manel Casals of the hotel association isn't interested in reducing the number of visitors. Instead, he says, more efforts should be made to attract business travelers who spend more and don't clog up the streets of the historic center. But he also realizes that this won't be an easy task. "There's only one Sagrada Familia in the world," he says. "Everyone who comes to Barcelona wants to see it."

And there is at least one advantage to that: The ongoing construction of the basilica has been financed primarily by ticket sales. In fact, the lack of tourists has now meant that its completion has had to be postponed. The work was originally meant to be finished by 2026, the 100th anniversary of Antoni Gaudi's death — a whole 144 years after building began in 1882.

Tourism is big business in the Dominican Republic. But visitors leave a trail of trash in their wake. Can a new waste management initiative keep the Caribbean paradise clean?

Barcelona, the jewel on the Mediterranean

Tourist magnet Barcelona is rich in cultural history and offers a wealth of attractions for visitors. Here are some of the highlights near Las Ramblas and beyond.