The magma has already released dangerous fumes as it flowed through plastic farming tarpaulins and fertilizer on the Spanish island. Residents have been told to stay at home with their windows closed. 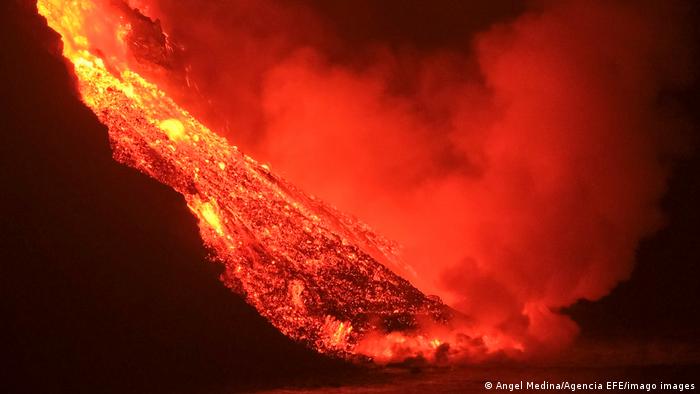 Lava from the Cumbre Vieja volcano on La Palma in the Canary Islands has reached the sea, Spanish volcanologists said late on Tuesday. They warned that toxic gases could be released as the magma hits the seawater.

What do we know about the situation?

An exclusion zone covering 2 nautical miles has been declared around the area where the lava hit the coast.

Authorities have asked residents outside of the zone to remain at home with their windows and doors closed.

"The lava flow has reached the sea at Playa Nueva," Involcan, the Canary Islands Volcanic Institute, wrote on Twitter.

Entering the water, the lava created "an impressive deposit 50 meters high" in less than 45 minutes, the Spanish Institute of Oceanography told the newspaper El Pais.

Locals evacuated due to poisonous fumes

The magma, which has a temperature of 1,000 degrees Celsius, has already destroyed banana plantations and greenhouses. Locals had to be evacuated after the lava flow set fire to plastic tarpaulins and fertilizer, releasing poisonous fumes.

Alexis Schwartz, a volcanologist with GeoTenerife, spoke with DW about the developing situation from La Palma on Wednesday. He claimed that the toxic gases released from the magma hitting the seawater had been blown away from populated areas and added that there was no immediate danger to residents.

"We had very adverse meteorological conditions yesterday," Schwartz said. "So what we had is a huge concentration not of volcanic gasses, but toxic plumes because of the burning of the plastic covers of the banana plantations."

At the same time, he described today's conditions as "excellent" and said the "wind is blowing everything towards the sea."

Cumbre Vieja began erupting on September 19 for the first time in 50 years. Volcanologists say they cannot predict how long it will remain active.