Commercial flights to the Canary Island have been called off due to an "accumulation of ash" in the air. A recent volcanic eruption on the island has forced the evacuation of thousands of residents. 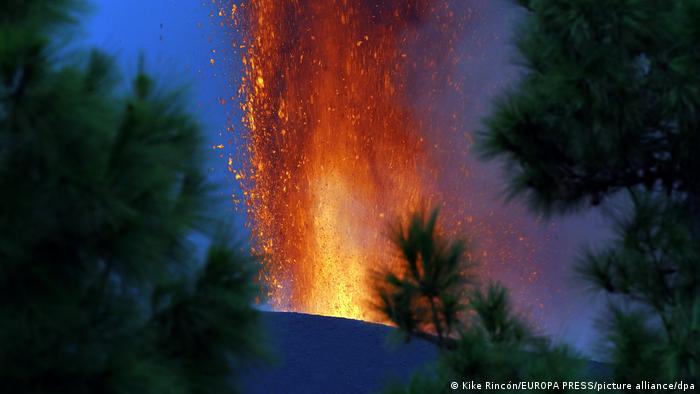 The eruption on the island was the first in 50 years

Flights to and from from the Canary Island of La Palma were called off by airlines on Saturday due to large quantities of volcanic ash in the air.

State-owned airport company Aena said the "airport is closed because of the accumulation of ash."

"Cleaning tasks have started, but the situation may change at any time," the firm tweeted, while saying the "priority is to ensure the safety of operations."

What is the extent of the volcanic eruption on La Palma?

A large volcano on the island erupted for the first time in 50 years last Sunday. In addition to ash, the volcano is also spewing lava and rock fragments.

The eruption has destroyed 420 buildings and forced the evacuation of almost 7,000 people from their homes.

The island experienced a high amount of activity on Friday.

"Volcanic surveillance measurements carried out since the beginning of the eruption recorded the high-energy activity so far during Friday afternoon," Canary island emergency services said.

No injuries or fatalities from the eruption have been recorded so far. The island has a population of about 85,000 people.

How is Spain going to deal with the damage?

Spanish Prime Minister Pedro Sanchez visited the island on Friday, and said authorities are "working on a special plan to rebuild the island."

The Spanish leader declared the island a zone "affected by a catastrophe," a designation which green lights financial aid for residents.

The event has negatively impacted banana crops on the island, which could endanger thousands of local jobs.

"Losses are already occurring because the banana is in constant production. It is a plant that requires fairly regular irrigation and almost daily work," Sergio Caceres, the manager of the Asprocan banana producers' association said.

The banana plant makes up half of the island's economic output. La Palma has a smaller tourism sector than other Canary Islands, such as Tenerife.

The island last experienced an eruption in 1971. Lava from the Teneguia volcano at the time killed an elderly fisherman and destroyed a beach.