Nguyen Van Dai, a longtime advocate for democracy, has been released from prison. He has flown to Germany, where he was awarded a human rights prize last year. 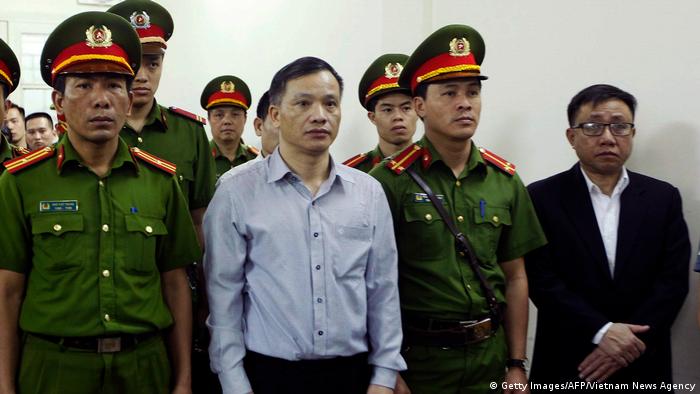 Prominent Vietnamese human rights lawyer Nguyen Van Dai was freed from jail and flown to Germany on Friday, just two months after he was given a 15-year prison sentence for plotting to overthrow the government.

Dai was released alongside fellow dissident Le Thu Ha, who traveled to Frankfurt early on Friday.

The lawyer has founded two major rights advocacy groups in Vietnam, including the Committee for Democracy in Vietnam and the Brotherhood for Democracy. In 2015, police prevented him from speaking at a Brotherhood event and reportedly beat him severely while he was in custody. He has been sentenced to numerous jail terms and periods of house arrest on sedition charges.

The Brotherhood, of which Ha was also a member, has been banned by Hanoi.

Dai's final arrest came in December 2015, when, according to his wife, he was arrested en route to meet with European Union representatives as part of talks about human rights in Vietnam.

While still in prison, he was award a German award for human rights from President Frank-Walter Steinmeier in April 2017.

Neither the Vietnamese government nor the German Foreign Ministry has commented on Dai's release.

Although Vietnam has recently signaled openness to social change, including LGBT rights, the ruling Communist Party maintains a tight lid on dissident voices.

According to Human Rights Watch, there are about 130 opposition activists in prison in Vietnam.

Vietnam has released a prominent dissident in a goodwill gesture ahead of Obama's visit. Rights groups and the US Congress want the president to address human rights in the communist nation. (21.05.2016)