Dissident blogger faces prison in Vietnam | Asia| An in-depth look at news from across the continent | DW | 11.10.2016

Nguyen Ngoc Nhu Quynh, a prominent government critic, has been arrested for "propagandizing against the state." The award-winning activist faces jail time of up to 12 years if convicted. 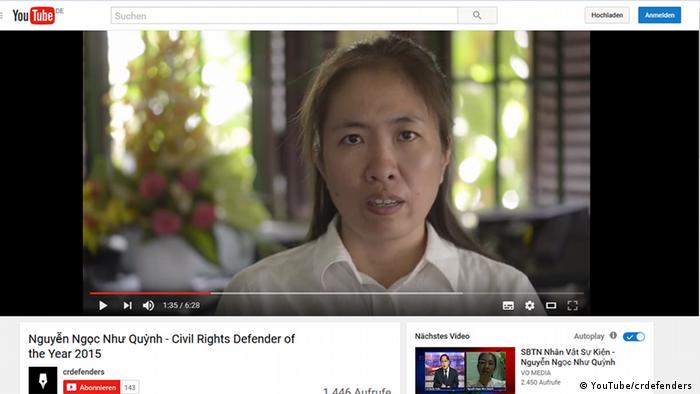 A Vietnamese court has sentenced more than 20 people to long jail terms after convicting them of trying to overthrow the communist government. This was one of the largest subversion trials in the country in years. (04.02.2013)

The 37-year-old blogger was arrested by police on Monday amid accusations that she was conducting anti-government propaganda.

Quynh, who posts under the name Me Nam or Mother Mushroom, is well-known in Vietnam for writing about allegations of human rights abuses. Her public Facebook page was launched in 2012 and has 5,000 friends and thousands of followers.

One of her posts called on police to stop killing civilians, listing the names of 35 people who died in police custody.

She had already been detained in 2009 for making T-shirts featuring slogans expressing opposition to a state-owned bauxite mining project.

Mother: she was doing 'what the law allowed'

Vietnamese authorities accuse Quynh of using her online activism to "distort the truth and history, against the guidelines and policy of the party and the state," according to a statement from the Khanh Hoa Province Police.

Under Article 88 of the communist country's penal code, Quynh could be sentenced to up to 12 years in prison.

The Network of Vietnamese Bloggers quoted her mother, Nguyen Thi Tuyet Lan, as saying that Quynh "just did what the law allowed and the purpose is for the country to change and to enjoy freedom and democracy."

In 2015, Quynh was awarded the Civil Rights Defender of the Year but was unable to attend the ceremony in Sweden after she was banned from traveling abroad.