The six members of the Brotherhood for Democracy accused of trying to overthrow the communist government have been given prison sentences by a Hanoi court. Lawyer Nguyen Van Dai was singled out for special treatment. 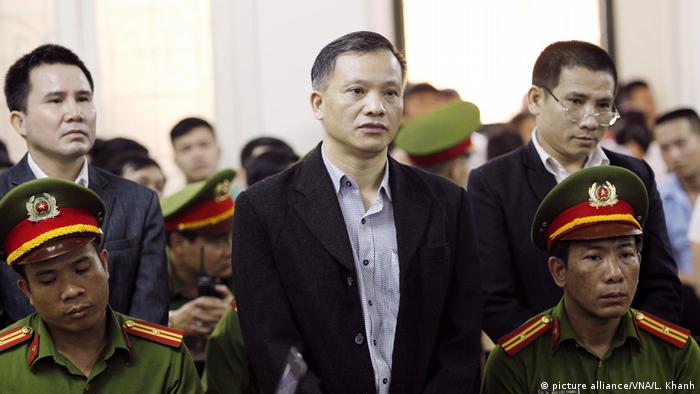 Human rights lawyer and co-founder of the pro-human rights network Brotherhood for Democracy Nguyen Van Dai and his assistant Le Thu Ha have been detained without trial since December 2015.

Dai's lawyer Doan Thai Duyen Hai told news agency DPA as he left the tightly guarded Hanoi courtroom on Thursday that Dai was sentenced to 15 years in jail and five years under house arrest after the court found all six accused guilty of sedition. "These are very hard sentences," Hai said. "They noted our arguments, but did not accept them." Ha was given a nine-year jail sentence and two years under house arrest.

The other four accused, Truong Minh Duc, Nguyen Trung Ton, Pham Van Troi, and Nguyen Bac Truyen, were arrested at their homes in July last year and had been kept in detention until the trial.

They were all accused of "activities aimed at overthrowing the people's government," according to the indictment issued by the Supreme People's Procuracy in Hanoi last December. The charges included carrying out human rights training, calling for multi-party democracy and receiving funding from foreign groups.

The indictment, according to the state news agency, claimed: "The defendants have taken advantage of the fight for 'democracy, human rights, civil society' to conceal the ... purpose of 'the Brotherhood for Democracy.'"

Two-year detention without trial for Dai

Since his arrest more than two years ago, 48-year-old Dai had not met with his lawyer. His wife had only been allowed three visits. "When I last met him, I think his spirit remained strong but he didn't look good... his hair has turned totally white," Vu Minh Khanh said, adding: "He's done nothing wrong."

"I'm very disappointed with the trial and strongly protest it," she said after the trial. "He is innocent and he pleaded innocent at the trial. He will continue to fight and will appeal the verdict."

Prosecutors singled Dai out as the leader of the group, saying he was responsible for developing its platform, recruiting members and raising finance.

International rights organizations have condemned the detentions. James Gomez, Amnesty International's director of Southeast Asia and the Pacific, said in statement: "Vietnam is one of Southeast Asia's most prolific jailers of peaceful activists - a shameful title no one should aspire to."

Gomez said AI believes Vietnam is holding 97 prisoners of conscience "who have been robbed of their freedom for nothing but promoting human rights." Human Rights Watch puts the number at 119.

The government in Hanoi says there are no political prisoners in Vietnam. "In Vietnam there is no such thing as a 'prisoner of conscience,' and there's no such thing as people being arrested for 'freely expressing opinion,'" foreign ministry spokeswoman Le Thi Thu Hang told reporters on Thursday.

Human rights advocate for more than a decade

Dai founded the Committee for Human Rights in Vietnam in 2006 and was sentenced to five years in jail in 2007 for spreading propaganda against the government. While his term was reduced to four years on appeal, his lawyer's license was revoked.

After his release in 2011, Dai co-founded the Brotherhood for Democracy network in 2013. It included other, formerly jailed dissidents advocating via social media for human rights throughout Vietnam.

The communist government in Vietnam imposes tight media censorship and controls criticism of the regime. Hundreds of police were posted outside the courtroom on Thursday and a planned march by families of the accused was stopped.

The "extremely dangerous" Category 4 storm made landfall in southwestern Florida, with authorities expecting it to leave a "historic" trail of destruction.